If you’re a male, and you are of my generation, then you have been there before. For 2 and a half years I was a devoted fan of professional wrestling (WWF).  At age 13, I swore it was all real. At age 14, I knew it wasn’t but harbored a deep hope that maybe it was.  At age 15, I no longer cared because the primary focus was shifted to watching “The Lovely Elizabeth” appear in her very good looking attire as the manager of the steroid injected actors while they did all the necessary chest beating and other manly posturing.

For me, this time period was the year 1989 to early 1991, which happens to  be precisely when the Ultimate Warrior rose to power, was defeated by Sergeant Slaughter, and then forced Randy “The Macho Man” Savage into a retirement at WrestleMania VII.   So with that background, it was perfectly fitting that I was sent Randy Savage and the Ultimate Warrior action figures to review.

This review is obviously not a board game, and so did not fit into our usual format.  With that in mind, I decided to devise a series of tests to see how they held up to my standards. Primary focus is on Authentic Likeness, Function, Durability, and Fun.

Authentic Likeness:
I will start out by stating that, by golly, they sure nailed it on the visual detail here.  The likeness of both The Ultimate Warrior, and The Macho Man were unmistakable.   The face paint for the Ultimate Warrior was spot on, and the costuming was exactly as I remember it.  It would have been real annoying if the hair was not right on The Ultimate Warrior, or if Randy didn’t have his hat.   This exceeded my expectations, and is perhaps the single most important thing for a company manufacturing “nostalgia”.

Functionality:
I was pleasantly surprised to see that these figures had more rotatable joints than a barbie doll (not that I would know), and the rotations happen at all the right places.  They can puff out their chests, they can move their arms and legs in all the ways they should, and can even flex and point their feet through an ankle joint.   More importantly, the tension on these joints is not so much to require a vice grip, but not so loose that they do not hold form.

Why is this important, you ask?  A wrestling figure that cannot hold its wrestling pose might as well just be a Ken doll. This test was not a clean sweep though. Randy’s z-axis hip rotation was very firm and hard to manipulate (this is what your hip would do if you were to stand straight ahead and then turn your right foot 90 degrees, pointing perpendicular to the right), and due to the hair mold on the Ultimate Warrior, it was hard to move his neck.

I forgive these minor things however, as it passed the acid test where I was able to perform a variety of poses and have the figures actually hold their upright balance to remain standing without a prop.

Durability:
I would like to say here that I dragged them across the driveway, dropped them from 30 feet, put them through the dryer, and smacked them with a hammer since that is what all red-blooded boys will inevitably do.  However, I could not bring myself to actually do this.   Instead, this test is more covered by subjective inspection.   The plastic is very solid and well constructed, and the joints look like they would withstand a “Black Cat” firework.   The costumes are, for the most part, going to hold up short of the streamers hanging from “The Macho Man’s” sleeves.  While authentic, these would get ripped off by my 3 year old before he could even eat the hat. 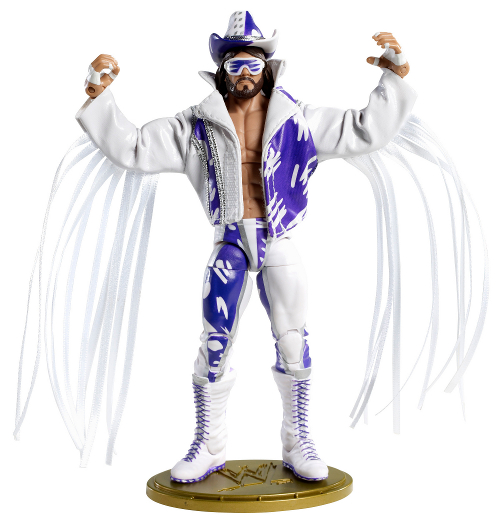 Fun Factor:
Ahh, the all important X-factor that has no solid criteria.  What is it that kids find fun?   Well — for my boys, the WWE action figures are not it.  Try as I might over successive nights, I could not even garner so much as a fleeting interest from my two boys. Perhaps I should not be surprised as the age of action figures has passed, and my 4 year old could care less about who “The Ultimate Warrior” was.   Sadly, this is where the toys failed in my household as kids today learn how to operate entertainment systems to get to Netflix streaming at the age of 2, and battery operated whatever’s will always win out.

While the production quality for these action figures cannot be argued, I am hard-pressed to call it a “kids toy”.   I think having action figures from the early 90’s scratches every itch for a Dad from my generation, but I do not think these will always find a place in the hearts of our children.  Certainly, many kids absorb our enthusiasm like a sponge, and I am not discounting wonderful moments of transferred joy to our kids (like the ending of “Toy Story 3”), but I wil leave it to the reader to determine if they, or their kids, will truly enjoy these action figures.

WWF will always have a place in my heart, and seeing these WWE action figures brings warm feelings into my fast-paced life, which we all lead. These figures are destined for a place in my office, where I worked out a pose with the Ultimate Warrior military pressing Randy as he begins his signature move, “The Ultimate Smash” — cuz you know, that’s just awesome.