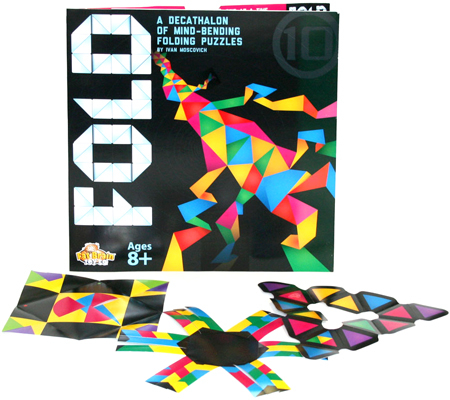 It’s nice to take a break from board, dice, and card games and engage our minds with a puzzle or two. One could argue that puzzles are just like games, since the player is attempting to meet an objective. And like board, card, and dice games, the means to achieve the objective is right in front of you. The path to obtain it is not always clear, however. Unless you are playing Candy Land. In which case, just keep moving forward, kids.

FOLD, designed by Ivan Moscovich and published by Fat Brain Toys, is comprised of 10 paper-folding puzzles. That’s 10 individual puzzles, not one puzzle that can be solved 10 different ways. The paper is thicker and sturdier than your standard printer paper and very colorful. Some of the puzzles have slight creases to help guide the would-be puzzle solver without leading them by the nose. The puzzles come in a flat booklet that is roughly the same size as the classic vinyl record album. After the puzzles are solved or abandoned, they can be flattened and placed in a pocket sleeve found in the booklet.

Depending on which of the 10 different puzzles you select, there might be more than 1 puzzle to solve. For example, the very first puzzle, FlexiTwist, is a 4 x 4 square. The puzzle to solve is simple. Fold the paper in such a way as to create up to 12 different patterns. Only after all 12 patterns have been successfully made can you brag about solving the puzzle.

Similar to the FlexiTwist puzzle is the Mysterious Morphing Magic Square that challenges the individual to fold 12 strips of paper, one at time, to create up to 4 unique images. The challenge is to fold the strips so the images naturally reveal themselves by layering the strips on top of one another instead of weaving them. Sound easy? It’s not. It will make you cry, shout, and want to burn down every forest you come across because this puzzle is made of paper and paper comes from trees. 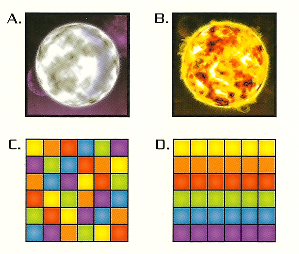 The other puzzles included are as follows:

A square puzzle that challenges the puzzle solver to fold the paper so two images appear to be behind bars at the same time. After awhile, you might feel like you are behind bars, too.

Puzzle solvers must attempt to fold 8 connected octagons so the final fold reveals a single octagon with small color circles in the correct color order sequence. You’ll dislikes colors and octagons by the time you are done with this puzzle.

A surprisingly satisfying puzzle that challenges the puzzle solver to take a 12 connected squares and fold them so that the final result is a 6 x 2 square rectangle that has 6 different colors on each side. Think Rubik’s Cube, but far less frustrating and cube’ish.

Slightly more frustrating than Three by Four Rectangle, this 4 x 4 square puzzle challenges the puzzle solver to create 1 of 4 different 2 x 2 solid colored squares. Luckily, the puzzle solver only needs to worry about making a solid color on both sides of the paper. That’s sarcasm, by the way.

The Strip of Seven

A deceptively simple puzzle, the Strip of Seven challenges the puzzle solver to make a 2 x 2 square with one side being colored  blue and the other side colored magenta. Expect to see red when attempting this puzzle.

Tricky is right. This puzzle is very similar to Three Square, but the puzzle solver is attempting to make triangles of the same color. If it helps, the solved puzzles look a lot like The Legend of Zelda‘s Triforce, which is worth attempting to make.

Lotus of the Heart

The premise of this puzzle is simple. Fold the strips inward in any order you like to create a solid colored 6-sided star. This puzzle is very similar to the Mysterious Morphing Magic Square, but there’s no mystery here. You’ll quickly learn this is one tough puzzle to solve.

A Bit of Help

For the uninitiated or easily stumped, these puzzles can be a grueling mental exercise. It’s alarming how quickly Parent and Gamer Geeks can regress to cranky children when the puzzles start to get “hard”. Child Geeks just walk away or go do something less challenging, like finding the last digit of Pi. The puzzle designer (who is a mathematician and is undoubtedly smarter than everyone on Earth) took this into account and provided a solution for each puzzle. Well, not every puzzle. For example, the Mysterious Morphing Magic Square solution reads as follows.

“You can solve each of the four puzzles in a difficult manner, but if you decipher the secret code and follow its order both forward and backward you will find an “EASY SOLUTION”.

Now before you go sending me email and write comments telling me that I misquoted the game, let me firmly state that I did not. Note the phrase “difficult manner”, which would appear to be a typo. Maybe. I cannot determine if the solution to this puzzle is cryptic or just poorly worded. And why is “EASY SOLUTION” capitalized and in quotes? Is this part of the puzzle or just some stinky red herring? Either way, it reminds me of the “puzzle solution” for Paradox Box. Gods, I hate that box…

To learn more about this paper puzzle that looks down on you, visit the puzzle’s web page. 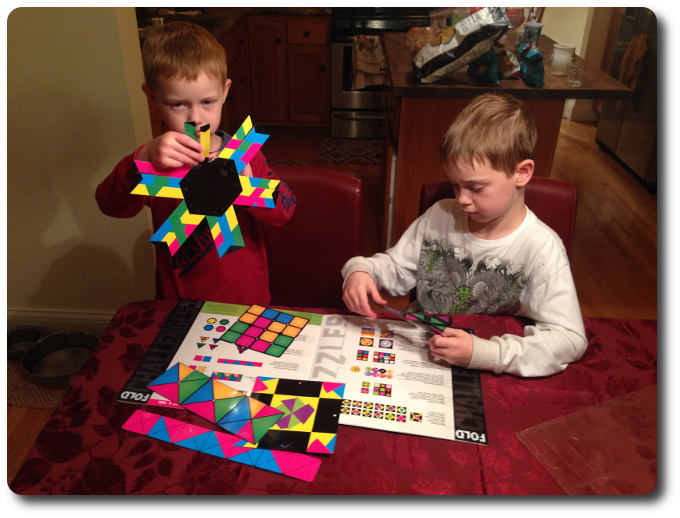 Note the look in their eyes….

The Parent Geeks, specifically the puzzle lovers and non-gamers, rather liked FOLD. According to one Parent Geek, “I think these are rather clever. They are small, can easily be held in a standing or sitting position, and keep you interested. I would work on these while I was watching TV.” Another Parent Geek said, “I don’t see any real value in these other than solving them. I think puzzles are neat, but they tend to be a one person activity and that’s not something I can share with my kids.” All the Parent Geeks agreed the puzzles were well made (despite being made of paper), challenging, and potentially educational if the puzzle solver kept at them. The Parent Geeks’ votes for the puzzles, however, were mixed giving FOLD both a thumbs up and a thumbs down.

The Gamer Geeks liked the idea of the puzzles and gave them a try. After about 5 or 6 failed attempts and unfolding the puzzles to start over, they decided to give it rest and come back to it a later. They never did. A number of the Gamer Geeks were able to solve the puzzles and were most pleased to brag about it. According to one Gamer Geek who declared himself the Puzzle King, “These are hard, but not too hard. I honestly don’t know if I solved the puzzles because I’m that good or because I’m that lucky.” Another Gamer Geek said, “Puzzles are fine, but they are not games. I don’t feel like I’m having fun, but I am being challenged. I need to have fun and be challenged at the same time.” The Gamer Geeks gave FOLD their full approval as a puzzle, but not as a game. As such, they decided not to endorse it.

FOLD is for puzzle lovers, that much is clear. You can be a puzzle lover and a board game player, but I don’t appear to have many of those in my groups. One thing is for certain, the puzzles challenged everyone equally. Age and skill were no match for the puzzle’s enigmatic challenge. Both Child Geeks, Parent Geeks, and Gamer Geeks all said the same thing and were bested by the puzzles in the same way. I’d say that makes it pretty clear that FOLD is either extremely well designed or extremely overly complicated.

FOLD is full of interesting puzzles that is sure to keep the interest of puzzle fans or very stubborn people who cannot abide being bested by a bit of colorful paper. If you are either one of these types of people, or somewhere in the middle, take a closer look at FOLD. Each puzzle is a deceptive little ego killer waiting to make you feel stupid. But if you solve the puzzle, you’ll be on top of the world. Until you try another puzzle, that is.

This puzzle was given to Father Geek as a review copy. Father Geek was not paid, bribed, wined, dined, or threatened in vain hopes of influencing this review. Such is the statuesque and legendary integrity of Father Geek.