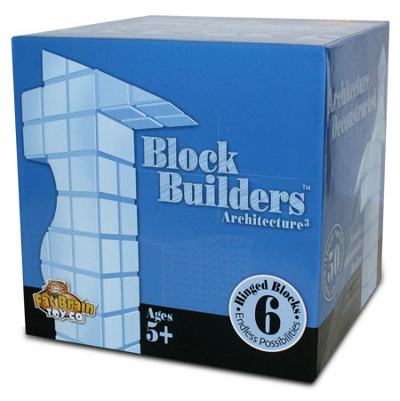 One of the earliest toys many of us played with as kids were simple building blocks. We’d stack them on top of each other to build a tower and giggle hysterically when they toppled over. There was a simple joy in that kind of play that we have a hard time recapturing as adults. In this puzzle solving game, we get a chance to play with blocks again, but this time, there’s a twist. Or better put, a hinge. Get your mind ready and dust off your imagination. It’s time to play.

Block Builders, designed by Tony Morley and published by Fat Bray Toy Company, is comprised of 6 hinged Blocks and 50 Challenge cards. The Blocks are made of solid and exceedingly durable plastic. The Challenge cards are made of typical card stock. The entire game fits in a cubed box with a hinged lid, mimicking the Blocks it contains.

Block Builders is one part puzzle game and one part free-form play. The game portion of Block Builders challenges the player to 50 increasingly difficult puzzles to solve. Each Challenge card (numbered 1 to 50) has two sides. On one side is the puzzle. This side is blue and has an illustration of an  irregular shape (uneven and lack of uniform symmetry). The only other piece of information that is given to the player is the number of Blocks used to create the irregular shape. A series of 3 squares indicates the difficulty of each puzzle (Beginner, Intermediate, and Expert).

On the other side of the card is an illustration that shows each of the Blocks, their relative position to each other, and the hinged position necessary to create the shape. Included is a quote from a famous architect or  a brief historical summary (referred to as an “ArchiFact”) of the architecture being mimicked with the Blocks . For example, on Challenge card #48, the irregular shape is meant to represent the architecture used in the creation of the Hoover Dam.

While the Challenge cards are of interest in their own right, the real stars of the game are the Blocks. Each Block has a hinge. When closed, each Block is a cube comprised of 4 smaller cubes. When opened, each of the 6 Blocks becomes something entirely different. The hinges are free moving, meaning there is no “lock position”. When the players are attempting to solve the Intermediate and Expert puzzles, they will find that the two parts of a Block can be just about anywhere in relationship to the hinge when attempting to solve a puzzle. 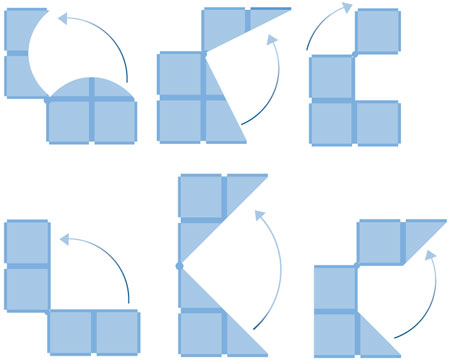 When not used to solve the puzzles presented by the Challenge cards, the Blocks can be used for free-form play. Geeks of all ages can attempt to use the Blocks to create different shapes – many in fact – by rotating the blocks on their hinges to create visually interesting and imaginative shapes. As the game suggests, the possibilities are endless.

There is no winner or loser in Block Builders. The game is meant to be a solitaire experience that challenges the player to think in multiple dimensions at once. This can be very taxing and mentally exhausting. Block Builders is perfect as a group problem solving exercise for this very reason. The different and unique perspectives provided by a group help to strengthen communication, team building, and problem solving.

Block Builders has a compelling design and bits that invite you to pick them up and start building with them. But for how long? Not very, I wager. This game is going to be a hit with the Child Geeks, but only to a certain age. Parent Geeks will appreciate it as an excellent mental exercise and a worthwhile activity to participate in with their Child Geeks, but not at a peer level. The Gamer Geeks are going to applaud the intelligent design, but will have zero interest in it as a game.

If such is the case, let’s focus on the Child Geeks for whom Block Builders is apparently designed for. The minimum age suggested by the publisher is 5-years-old and older. I openly laughed at this when I read it. There is nothing in the game that is a choking hazard. The Blocks are too large and the cards are just thick paper. This leads me to believe that the stated age minimum is meant to represent the minimum mental problem solving capabilities necessary to tackle the very first puzzle. If the Blocks are only used for free-form play, Block Builders would be appropriate for Child Geeks as young as 2-years-old.

The puzzles are difficult. Make no mistake. The difficulty increases at a steady and steep pace. Each Challenge card is best thought of as a layer. The higher the number on the Challenge card, the deeper the layers of difficulty. Indeed, jumping right into the game by attempting to solve Challenge number 50 would be like attempting to run a marathon after sitting on a couch your entire life. In other words, you won’t be able to do it.

When I put Block Builders in front of my 3, 6, and 9-year-olds, they instinctively reached for the Blocks and started to build with them. While the use of the Blocks is very intuitive, the Challenge cards are not. I had to explain how they were used and how the Blocks could be changed to reconstruct the images shown. My 6 and 9-year-old understood immediately. My 3-year-old told me he understood, but had no real interest in the puzzles. He just liked the Blocks. And so, after explaining and demonstrating a few examples of how the Blocks worked and connected, I asked each of my Child Geeks their thoughts on Block Builders so far.

“These puzzles look really tricky, but I bet I can solve all of them if given enough time.” ~ Nyhus (age 6)

All of my Child Geeks appear to be interested and every adult I put the game in front of has remarked how interesting the Blocks are. A good sign. Let’s see if Block Builders is a solid puzzle game or if it falls underneath its own weight.

The Child Geeks all enjoyed Block Builders, but the older they got, the less interesting the game became. My 3-year-old would sit and build over and over again without pause, while  my 9-year-old became disinterested in less than half an hour. The Child Geeks who liked puzzles also had a wonderful time with Block Builders and did their very best to solve every Challenge card. The highest any of the Child Geeks got was Challenge card number 16, which also happens to be the shift from “Beginner” to “Intermediate”. Interestingly enough, when the Child Geeks became frustrated, they started interacting with the  Blocks in free-form play instead of just walking away from the game. After a few minutes, they would attempt the puzzle again and succeed. The free-form play helped them solve the puzzles by working through the problems using exploration and experimentation. When it was time to put the Blocks away, they all agreed to approve Block Builders, with the younger Child Geeks eager to play with it again as soon as possible. 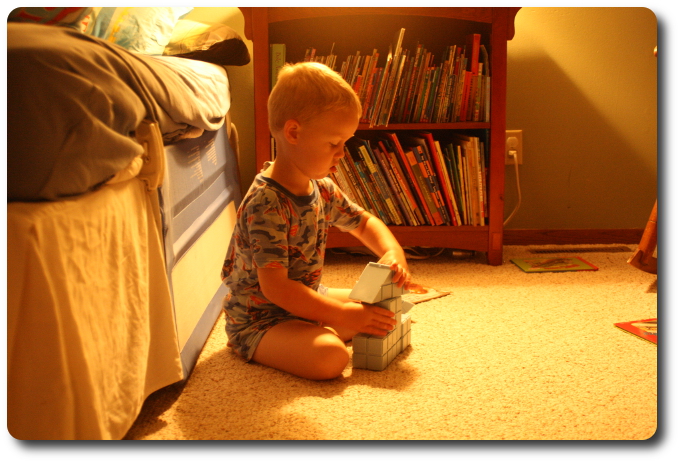 My youngest little geek quietly builds a “Zombie House” before we get ready for bed.

The Gamer Geeks, as predicted, liked the Blocks, liked the idea behind the game, but had no real interest in Block Builders at a Gamer Geek level. As Parent Geeks, they were overjoyed, but the game was simply not something they thought of as a “gamer’s game”. According to one Gamer Geek, “Really neat design, but this isn’t a game I would expect to see on any Gamer Geek’s table.” Block Builders was rejected by the Gamer Geeks.

Block Builders is a very interesting game. I have yet to decide if it’s better as a free-form toy or as a challenging 3D puzzle. Perhaps both, but depending on who you play it with, it always seems to be enjoyed one way or the other. And for what it’s worth, none of our players have figured out Challenge cards 40 through 50. Including me. But I won’t be stopping anytime soon. I’m almost in my 40’s, but I still love playing with blocks and solving puzzles.