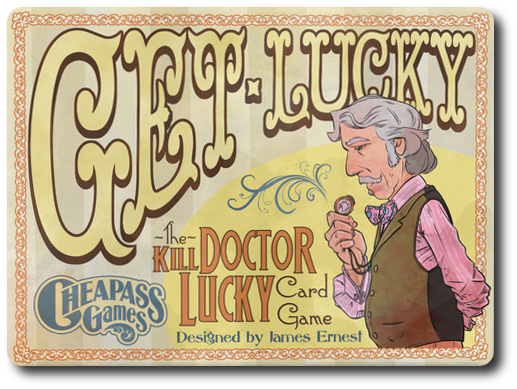 Doctor Lucky is, by all rights, a good man. He has served his country during wartime and gives back to the community whenever and however possible. So why is he the target of murder? Simply put, the man is insufferable. There is just something about him that you do not like. So heated is your disgust that you have contemplated murder, and now, you might actually go through with it if the opportunity presents itself.

Get Lucky, designed by James Ernest, Rick Fish and published by Cheapass Games, is comprised of 72 cards and 1 Doctor Lucky pawn. The cards are as thick and as durable as your standard playing card. The pawn is made out of wood. The cards are very busy. Artists Israel Evans has provided just the right amount of artwork to each card, but the amount of wordage on each card makes it feel rather cramped. I’d go so far as to suggest that 90% of what is on each card has nothing to do with the game and is just there for thematic flavor, pushing the narrative. Which it does.

Second, shuffle the game cards and deal 6 to each player, face-down. This is the player’s starting hand. The cards should be kept secret until played. The remaining game cards are placed in a deck face-down in the Drawing Room. Leave room for a discard pile.

Third, place the Doctor Lucky pawn on the lowest numbered Character card owned by a player (that is, not in the Drawing Room or the absent pile).

This completes the game set up. The player who currently has the Doctor Lucky pawn in front of them goes first.

The Character cards represent the different people in the game who have a murderous grudge against Doctor Lucky. While each comes with a backstory, what matters is the character’s name and the Character card value, which determines turn order. 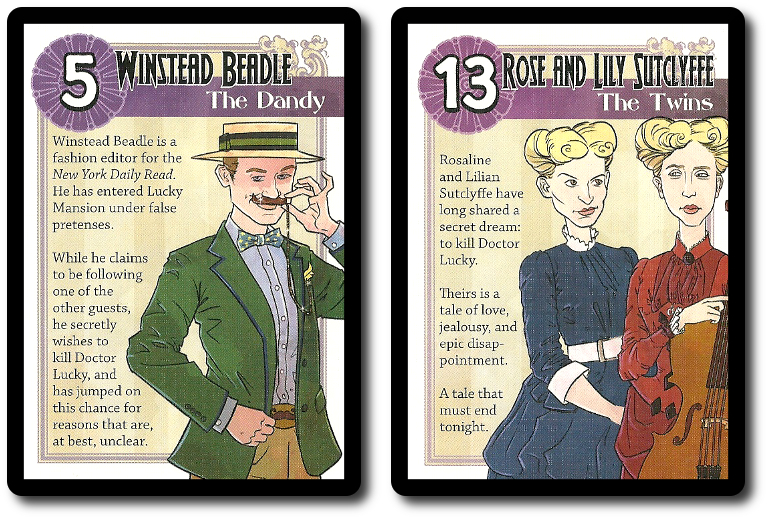 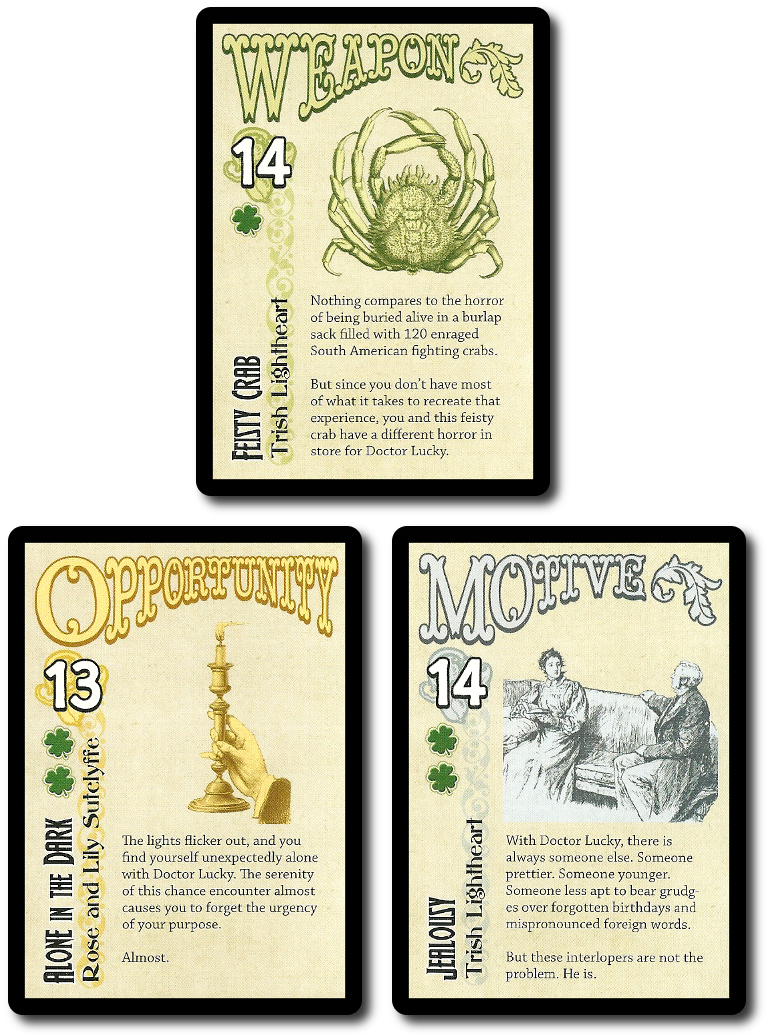 Trials and Tribulations of Murder

Get Lucky is played in turns with no set number of turns per game. A player’s turn is comprised of one action which can only be taken if the Doctor Lucky pawn is located on one of their two Character cards. These actions are summarized here.

The player can play 1 “Upgrade” game card from their hand attaching it to one of the two characters in front of them. Each character can have no more than one weapon, one motive, and one opportunity “Upgrade” game card attached to them. All “Upgrades” are permanently attached to the Character card, but a perfect “Upgrade” can replace an imperfect “Upgrade” of the same type (imperfect weapon can be replaced by a perfect weapon, for example).

If the Doctor Lucky pawn is located on the Character card that is currently active, the player can attempt to murder the good doctor. This is done by the player first announcing to the table they are attempting to put Doctor Lucky into the grave. The player can now sit back and see if they are successful or not.

Starting on the player’s left, each opponent can now discard 1 or more game cards to add Luck that cancels the player’s total Murder points. Opponents can also pass, which means they don’t play anything. Opponents can also discard the perfect “Upgrade” game cards that belongs to the Character card currently attempting to murder the doctor. If this is done, the murder has automatically failed. If the number of Luck points (represented by Shamrocks) is equal to or greater than the number of Murder points, the attempt to take Doctor Lucky’s life has also failed. 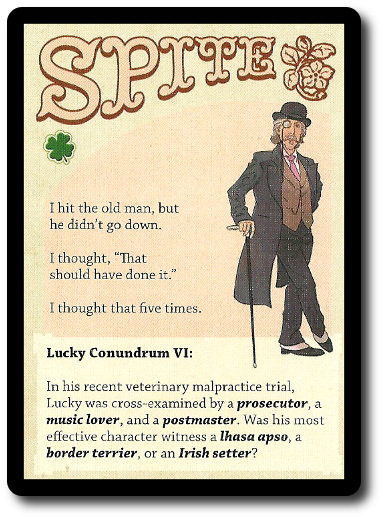 Continuing and Winning the Game

After the player takes their turn, the Doctor Lucky pawn moves to the next highest Character card value. For example, if the Doctor Lucky pawn were on a Character card with a value of “4”, it would next move to “5”, “6”, or “7”, and so on depending on what the next highest value was. If there is no higher value, it goes to the lowest value and starts its rotation again.

The game continues, as described above, until one player can successfully murder Doctor Lucky without being thwarted by their opponents.

To learn more about Get Lucky, visit the game’s web page.

For reasons noted in the Parent Geek paragraph below, not all of the Child Geeks were able to play the game. Those who did had a good time, trying to one-up their opponents and loving every moment when they were able to stop an opponent from winning the game. According to one Child Geek, “It’s kind of a race, but also kind of wait-and-see kind of game.” Which is to say, the Child Geeks quickly learned that outfitting their Character cards early with upgrades might seem like a good idea, but rushing makes for a weak murderer. Another Child Geek said, “It can be frustrating at times, but I like it most of the time.” Attempting to get the doctor and not being able to – consecutively – does make one feel like they are wasting their time. But each loss is only a slight setback, and the Child Geeks seemed bound and determined to get the doctor no matter how many times they failed. In truth, I think each failed attempted fueled their interest and only made their hunt for victory all the more intense. When the games were over, the Child Geeks voted to approve the game.

A game about murder, even a silly little card game, was not met warmly by the Parent Geeks. According to one Parent Geek, “There is nothing fun or enjoyable about murder, even if it’s a card game.” That feeling was held by many, but not all the Parent Geeks. A few even let their children play the game, finding it easy to change the game’s goal (murder) to something much more family friendly. In this case, it was pick-pocketing the good doctor for his pocket watch. Brilliant! The Parent Geeks who did sit down to give the game a chance found it to be light and fun, fast at times and also strangely slow during others. According to one Parent Geek, “Nothing can really happen for several turns when players are just attempting to make their character stronger.” But that didn’t stop the players from enjoying the game as a whole. In fact, the Parent Geeks fully approved Get Lucky (only those who played got to vote) but did want me to note that while the gameplay is family friendly, the game’s theme is most certainly not.

The Gamer Geeks have no qualms about a game’s theme or narrative as long as they get to play it. Having no real issues with Get Lucky, they quickly got it to the table. According to one Gamer Geek, “Simple and to the point. I’d play this game late at night or as a filler, as there is enough strategy and depth to it to make it interesting.” Another Gamer Geek said, “The game is strangely limiting, but it works within the context of the gameplay. Certainly, not a game to take serious and I think I’d only play it once in a very long while.” The Gamer Geeks didn’t find anything particularly wrong with the game, but it didn’t please the elitists. For the most part, all the Gamer Geeks agreed that the game was easy to play, required enough strategy to keep each turn meaningful, and the theme was silly enough to make it entertaining enough to pass the time. They also agreed that the game was a bit too light, repetitive, and limiting when it came to possible tactics and deeper gameplay. As such, the Gamer Geeks did not approve or reject the game, feeling comfortable with a mixed level of approval.

There are similarities to this card game and the board game version (Kill Doctor Lucky), but not enough to make it feel like you are playing the same game. Thematically, they are almost identical. The goal is also the same. Kill the poor doctor. The gameplay is very different, however, making each game feel unique. An individual owning both games can rest easy in the knowledge that they have two different game experiences in their collection that just happen to be murdering the same person. Kind of dark when you think about it.

The most interesting aspect of the game for me was the swapping out of Character cards. You’ll eventually get to a point where the Character cards you have are no longer worth anything due to either too much spite or they don’t have enough Murder points to make a go at Doctor Lucky worth while. Swapping out a Character gives a player a new opportunity to play some perfect cards to commit the perfect murder.

As for me, I enjoyed the card game, and I enjoyed it more than the board game. The card game is faster and less restrictive, making the overall gameplay feel lighter and more satisfying. True, this game won’t make you smarter or a better game player, but it does require the player to think things through. Just not a lot…or often. It’s by no means a game you can play brain-dead, but nor do you need to take your smart pills before sitting down for a game or two. It’s in that perfect sweet spot that makes so many filler games so much fun to play. Light and easy, with just enough depth to keep you immersed but not drowning or dry and bored. Do try this darkly whimsical little card game. I think you’ll find it to be a fun way to kill some time.