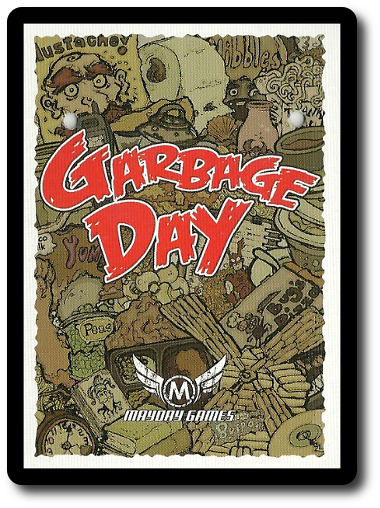 My kids like to play Trash Jenga at home. This is where they stack trash up and over the garbage can until if eventually falls. The kiddo who makes it fall is responsible for cleaning it up. While I’m all for gamification, this type of game never ends well. In this game, you’ll be playing your own version of what my kids do at home. One wrong move and you’re busted.

Garbage Day, designed by Shane Willis and published by Mayday Games, is comprised of 72 Garbage cards, 13 Mischief cards, and 5 Room cards. The cards are as thick and as durable as your standard playing card. The game’s container looks like a garbage can, which is used during the game.

Second, give each player a Room card. Players take their Room card and place it in front of them with the “Busted” side face-down. Place any unused Room cards off to one side of the game playing area. 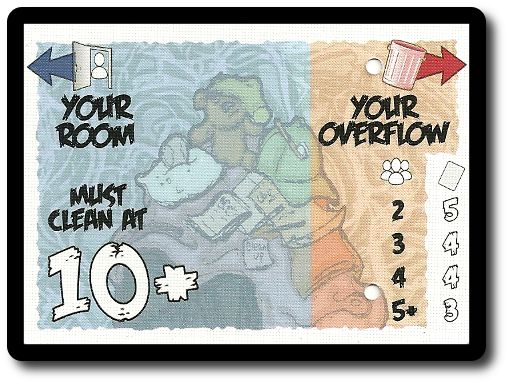 Fourth, shuffle the unused “Clutter” and the rest of the Garbage cards together to create the Garbage deck.

Fifth, deal two Garbage cards to each player. This it the player’s starting hand. Cards should be kept secret until played. Place the Garbage deck face-down and within easy reach of all the players.

That’s it for game set up. The last player to take out the garbage goes first.

Dragged to the Curb

Garbage Day is played in turns. A player’s turn is comprised of 3 steps which are summarized here.

The first thing a player does is draw one card from the Garbage deck, adding it to their hand of cards. This is repeated until the player is holding no less and no more than three cards. This step is skipped if the player has three or more cards in their hand at the start of their turn.

If there are no more cards to be drawn and there are two or more players still left in the game, the first step is skipped.

The player now plays one card from their hand. Cards can be played to three possible spaces which are determined by an icon on the card’s face.

Play to Garbage Can 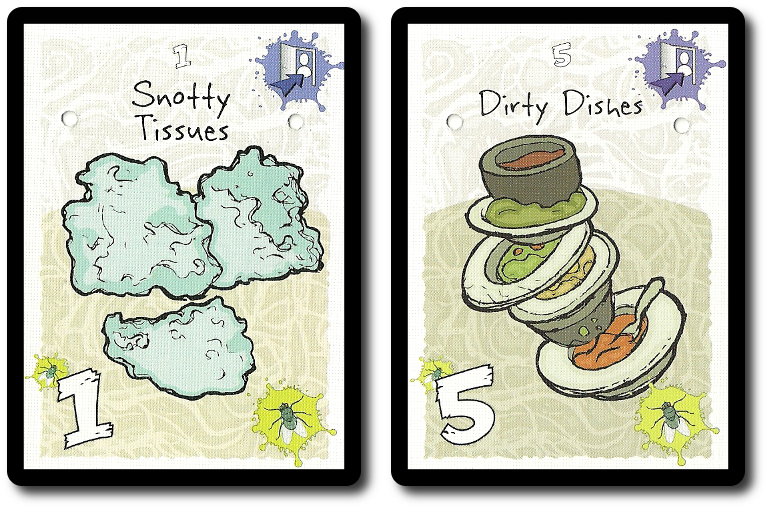 Play to Your Room

The player now checks to see how many total Garbage points they have accumulated in their room. If the total is ten or more points, then the player must “clean their room”. One card at a time, the player must place their cards to the garbage can until all of their Garbage cards have been removed from their room.

If the player’s total clutter is less than ten, then no additional action is necessary. 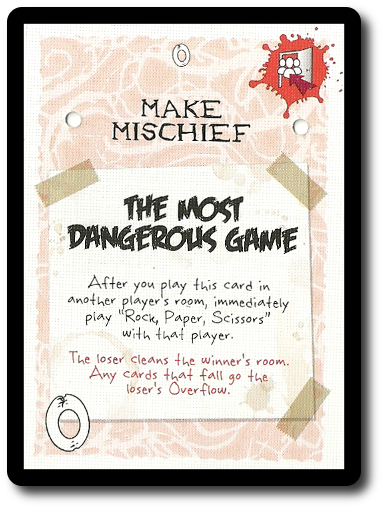 An Avalanche of Trash

If cards should fall due to an opponent bumping the table, the player who is responsible for knocking over the cards collects them. If cards fall and no player is at fault, they are set aside and will be collected by the next player who causes a card or cards to fall.

The game ends when only one player remains who has not been “busted”. If all the cards are on the garbage can, the player with the fewest cards in their Overflow pile wins.

The Child Geeks fell in love with the game right away, finding it fun to not only stack the trash but to watch it all come crashing down, too. According to one Child Geek, “I can’t decide what I like better. Making a really big trash pile or watching it fall down all over the table.” Which is not to say that the Child Geeks knew full well that the object of the game was to NOT collect trash. It’s just that they didn’t take the game seriously and focused more on having fun than actually winning. As one Child Geek put it, “If the object of the game was just to win, I’d be really frustrated because the cards keep falling. But if you just play it to have fun, the game is pretty good.” After the trash was toppled and taken to the curb, all the Child Geeks agreed that Garbage Day was a game they really enjoyed.

The Parent Geeks were not as enamored as their younger gamer counterparts, but they also found the game to be a good time. According to one Parent Geek, “Pretty simple in its execution and playing style. Fun for family game night or just playing with some other adults and kids.” Another non-gamer Parent Geek said, “Reminds me a lot of the game Pick Up Sticks I played as a kid or when I tried a few times to build a house of cards. I like it.” For the most part, all the Parent Geeks agreed that Garbage Day was a fun game to play with the family, but not everyone thought it would be as enjoyable with just adults. A few suggested that a couple of glasses of wine and some beers would make the game a lot more tricky and possibly fun with just an adult crowd. Regardless, they all voted to approve the game, finding it to be entertaining enough to give it their endorsement.

The Gamer Geeks were not as impressed, finding Garbage Day to be pretty one-sided when it came to gameplay and lacking much in the way of overall depth of play. They all found it to be a game that might be appropriate for drinking and a few even suggested that it could be used to determine the winner of other games in case there was a tie. However, the more they played it, the more they liked it. According to one Gamer Geek, “The game grows on you. I mean, it’s stupidly simple, but it’s also kind of fun after a bit.” Another Gamer Geek said, “I might play this as a filler, but the game is just not that interesting until the very end. Even then, you could get knocked out early and you just have to sit there with a thumb in your nose.” When the votes were in, the Gamer Geeks were split, with some believing that Garbage Day was good enough for light and occasional plays and others believing the game was just trash.

I personally found Garbage Day to be light, fun, and pretty silly. I played a game very similar to it during my party days in college and I gotta say, the game hasn’t changed much. You still have to balance cards, hold your breath, and roll your eyes when all the cards come crashing down. The only aspect of the game I do not like is that a player can be knocked out pretty early and have nothing else to do but watch their friends have a good time. I’m not a fan of these kinds of games, as they quickly alienate non-gamers and less experienced gamers. Garbage Day is no exception and it can leave a player out in the cold for a good 10 to 15 minutes.

But if we look past that one error, the game itself is pretty decent. It’s simplistic gameplay hides a challenging game of balance and guile. If you are good at visualizing how cards are connected, you shouldn’t have a problem balancing cards on the garbage can. For those with a shaky hand, the game is going to end quickly. The real trick is a mix of balance and pushing your luck. A good mix that promises to be entertaining most of the time, but only when you are playing.

If you like dexterity games where balance and hand management go together like a pair of dirty socks then do take the time to play Garbage Day.