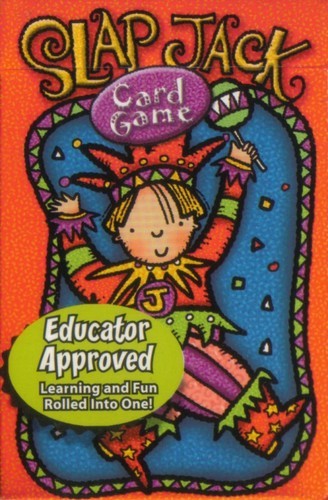 In the game of Slap Jack, each player is attempting to be faster than the other players and collect all the cards. This is done by literally slapping their hand down on a stack of cards when a specific card is revealed. If done correctly, their pile of cards will grow while their opponent’s piles quickly dwindle to nothing. This is a fast game that geeks of any age can play anywhere, anytime.

This game is comprised of either a standard deck of  52 playing cards or as a pre-built custom deck of cards (as illustrated by the product image above). Regardless of what you use to play, the game boils down to two cards: the “Jacks” and the rest of the cards. If you are playing with a standard deck of 52 playing cards, the Jacks of each suit are the “Jacks” to be slapped. If you are playing with a pre-built custom deck, the “Jack” will be noted in the rules, if it is not readily obvious just be looking at it.

To set up the game, take the deck of cards and shuffle them thoroughly (which, admittedly, is a funny thing to even note, because exactly what is the alternative…not shuffling thoroughly? What is that called? Half shuffled? But I digress….), and deal out the entire deck to the players. The cards should remain face down in front of the players at all times. Once the cards have all been dealt, you are ready to go slaphappy. See what I did there?

On a players turn, they take the top card from their deck and quickly flip and place it on the pile for all to see. The idea here is that the person who is playing the cards is seeing it at the same time as the other players. In practice, this doesn’t always happen as the card’s face will sometimes be seen first by the player who is playing the card. Moot point, as each player gets to do the same thing on their turn, but worth noting all the same.

Depending on what the card is, one of three actions will be taken by the players.

Play continues in a circle with each player taking a turn by flipping a card over. Anyone can start the card flipping again after the “Jack” has been slapped and the table cleared. For the sake of sanity, have the person who just slapped the “Jack” flip a card and continue play from there.

The winner of the game is the last player to have cards at the table. However, at any time during the game, if a player is out of cards, they can once again be part of the game if they successfully slap a “Jack” and acquire more cards in the process of doing so. Personally, I sometimes choose not to play with this rule as it can increase the length of the game, but if you are playing with little geeks and other friends, keep the rule if you always want people to participate.

This is an easy game with a silly action element that will be a lot of fun for my little geeks. My two oldest are both very physical and love to jump, run, and wrestle. A game wherein you are required to physically slap the table, hard, is going to be a delight for them. This is mainly due to the fact that their Mother frowns upon random table slapping in general, but in the case of the game, is not only permissible, but highly encouraged.

Add in the easy rules and the fast game play and you’ve got yourself a real winner. So, after explaining the rules to my little geeks and giving them several examples of play, I asked them what they thought of the game. I was not the least bit surprised with the following quotes:

Well, well, well…look who thinks they can beat their old man to the slap! Truly, this will be epic game play.

I believe Robert Brault summarized it best when he said the following quote:

“Enjoy the little things in life, for one day you may look back and realize they were the big things.”

As expected, my little geeks loved the game and so did I. Not because the game provided depth or particularly interesting game play, but because the game was so much fun to play with my little geeks. The only thing louder than the hand slaps on the kitchen table was the laughter. And how we laughed. We spent most of the time either laughing or trying to catch our breath. Very few experiences in life, let alone games, can provide that much pleasure and fun.

The little things, like little games and little geeks, can be and are many times over, “big things”. I am always amazed when my little geeks do or say something that briefly gives me a glimpse of the men they will one day grow up to be. The same can be said about this game. While small, it gave us a huge amount of fun.

And all for the price of a deck of playing cards.