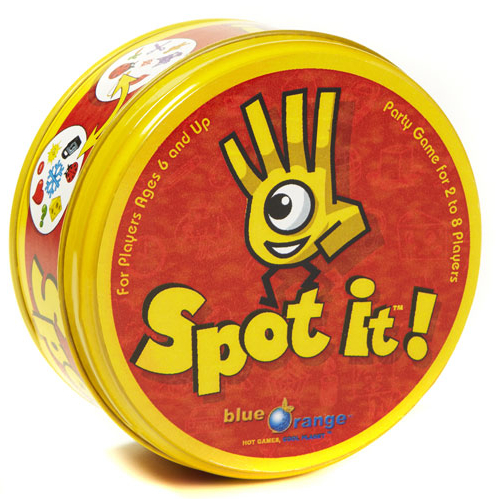 Spot It! is a fun and fast game that requires quick reflexes and a sharp eye. Each card has 1, and only 1, symbol that will match only 1 symbol on any other card in the deck. Players must quickly identify what symbol that is by visually scanning the cards. The game is challenging without being heavy and is accessible to very young little geeks and wizened venerable geeks alike!

Spot It! is a game comprised of 55 cards. Each card has 8 random symbols on it. In total, there are more than 50 symbols in the game. The round cards are made of the same basic card stock as a standard deck of playing cards and will be durable enough to last for many, many games. The game itself, complete with rules, all fits in a small tin box that is light and very portable (fits in the palm of your hand). This makes the Spot It! excellent for trips and getting your game geekiness on whilst abroad. 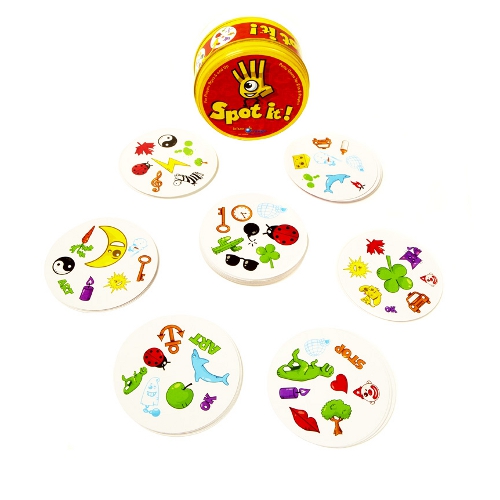 Colorful and fun, my little geeks loved the artwork from the very start!

Five Games in One!

Spot it! comes with five mini games that all play on the same mechanic of single symbol matching. Depending on the mini game being played, the players are either attempting to collect the most cards or discard the most cards. All the mini games are fast and easy to teach. The core mechanic of single symbol matching is in the forefront of each game, but the subtle play style differences makes each mini game feel like a unique experience.

About the Mini Games

Each of the five mini games are summarized here.

As already mentioned, each game is slightly different but all use the same mechanic of symbol matching. This allows you to teach the game once and play it five different ways!

My little geeks love to play games, especially those that allow everyone to laugh and be active at the table. More and more, they want to raid their father’s game collection and play games on their own. LEGO Minotaurus and Monster 4 gets a lot of love as does Rattlesnake. Games that are easy to set up and quick to play are selected often. This is due in part of the lack of patience my little geeks have in regards to the time it takes to put the larger games together as well as their overall attention span (or lack thereof).

When I introduced Spot It! to my little geeks, the first thing I told them was the game was very fast to set up and play. When I demonstrated this by shuffling the deck and dealing the cards to play The Tower mini game, they were instantly impressed! Bing! Bang! Boom! First player go! This appealed specifically to my 4-year-old who wanted to set up the game each and every time. Because Spot It! is an easy game to set up, I was more than happy to give that responsibility to him. He was overjoyed!

After explaining a few of the mini games to my little geeks, agreeing on which one we would play first, and showing them how the symbols match by shape and color (but not necessarily by size or orientation), I gave the cards a quick shuffle. While doing so, I asked them their thoughts on Spot It! based on what they knew so far.

Looks like Spot It! is spot on for my little geeks! (See what I did there?)

Spot It! is a great successes with my family and with my little geeks! What really appealed to them was the basic mechanic of matching coupled with the need for speed. My little geeks are no strangers to memory  and matching games and they quickly caught on to what was required of them. What they found very appealing were the five different games that all played on the same basic mechanic. This provided them the ability to play the game over and over again without getting out a new game.

As luck would have it, my soon to be 2-year-old, Ronan, also started playing the game by matching the different icons together if we put two cards side-by-side in front of him! We’d ask where the dragon was and he’s point them out! He is a long, long, LONG way off from being able to play the game, but it was incredibly thrilling to see a very young little geek mind start to identify and match the symbols without prompting. 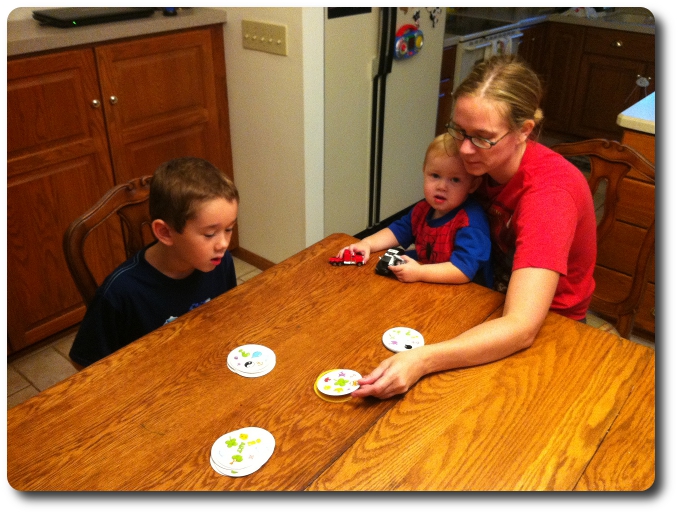 Fast and easy play, everyone at the table was having fun!

Gamer Geeks are going to enjoy this game but only in passing. It will be fun to bring to the table from time-to-time as it is fast and promotes some light competition. Emphasis on the “light”. So light, in fact, that it will become of little interest to the Gamer Geek within a couple of minutes. Not a fault by any means when you consider that the Gamer Geek was most likely never an intended audience. However, it is worth noting that the Gamer Geeks I played Spot It! with did not turn their nose up to it, nor did they embrace it. Spot It! falls short of being a Gamer’s game, but is clearly bringing enough to the table to make a Gamer Geek smile. Lacking strategy and tactics, it does not provide enough “meat” to satisfy a Gamer Geek’s appetite, but Spot It! is an excellent appetizer for an evening of fulfilling game play.

Parent Geeks are going to love playing this game as are the non-gamers. It promotes friendly light competition, laughter, and keeps all the players engaged. The non-gamers I played the game with became rather focused and had a great time playing. Often we’d play several rounds, changing the mini game after each game was completed. This made each new game we played feel fresh. Add in the fact that the Spot It! is small and can be played easily on a tiny surface area and the Parent Geek has a game that can be packed in a purse or bag and brought out to play at the restaurant , on a coffee house table, or on the floor of the tent with ease.

Child Geeks simply love this game. My 4-year-old and 7-year-old were evenly matched and had a blast. Fast and easy, social and engaging, the Child Geek will seek the Parent Geeks out to play and will have no problem teaching it to their peers. I have also observed that my little geeks have made up their own mini games. I think the five mini games provided were enough to keep the game interesting, but I wasn’t about to tell my little geeks to stop thinking of new ways to make the game even better! The round cards also seem to greatly appeal to the Child Geeks, which are not only visually interesting but also makes the cards easy for little hands to hold.

In summary, I am very pleased with Spot It! The game is exceedingly light but has a special charm to it that makes it fun to play casually or seriously, quickly or at a slower pace. Spot It! easily adjusts to your needs and changes gears seamlessly from one mini game to another. Simply just a great family and little geek’s game!

8 Responses to Spot It! Game Review