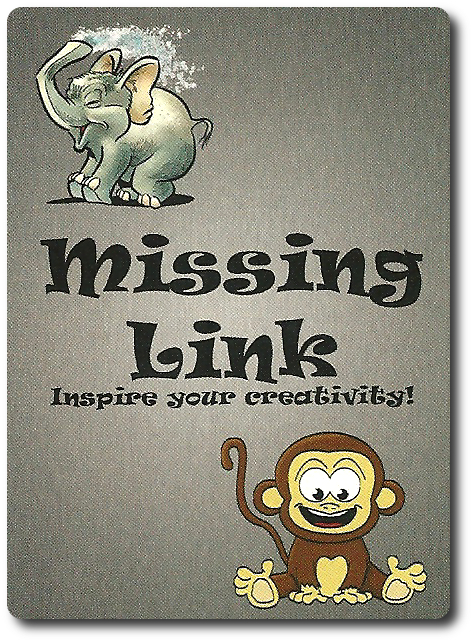 Buddhism teaches that all life is interrelated on levels that are both visible and invisible. There is always something that connects you to the person next to you, to a rock halfway across the world, and to the universe as a whole. Pretty deep. In this game, players will be asked to identify what is common and not so common between knowns and unknowns. When you see what’s missing, you’ll see the answer.

Missing Link, designed by Duncan Davis and published by Sherwood Games, is comprised of 108 Object cards and 4 Rule cards. The cards are as durable as your standard playing card. Not included with the game, but possibly necessary in order to play, is a time tracking device (smartphone, sand timer, etc.)

Each Object card in the game depicts 1 common thing. An ice cream cone, dog, chair, and so on. Th name of the each object represented is printed on the card. This is meant to ensure that the reader understands what is being portrayed. While helpful, it not necessary to read the name to identify the object. 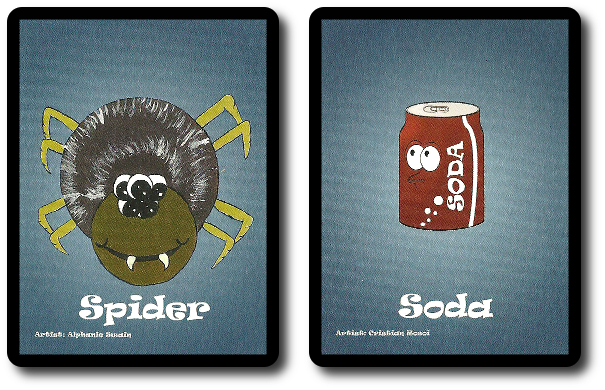 Missing Link can be played several different ways. Each game mode is summarized here. Game set up is always the same. Shuffle the deck of Object cards and place them face-down in the middle of the playing area. Depending on the game mode selected, additional set up steps might be required.

Free for All: Basic

This game made is played in turns. When it’s their turn, the active player drawing 2 cards, making certain not to reveal them to the guessers. The active player then views both, secretly, and reveals 1 of the 2 cards by playing it to the table, face-up. The other card is kept hidden.

The active player now gives hints that suggest what the hidden card is by making factual statements about characteristics both the revealed object and the hidden object have in common. The guessers attempt to name the hidden object based on the hints provided. 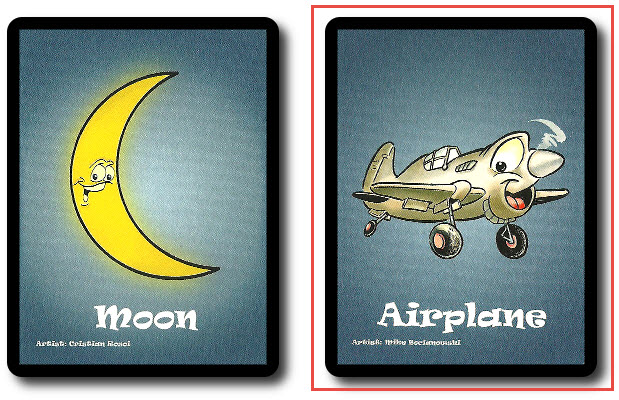 If that doesn’t sound helpful, keep in mind that the guessers will now start naming objects. Answers and negative responses given will help a player listening for clues start to piece together a better picture of what the hidden object is. The active player wants the hidden object to be named so they can earn points. It’s in their best interest to provide as much information as possible by always providing factual statements that are true for both the known and unknown object. Based on what the guessers say, the active player can provide more information.

Free for All: Turn Time Limit

Free for All: Ask Questions

Same as the basic version of the Free for All game mode, but guessers can ask questions. Questions must cover both the revealed and the hidden object. For example, “Do both of the objects live in the water?” The active player must, as always be truthful in their response, but they need not go into detail. The questions should be phrased so they can be answered with a “Yes” or a “No” response. This game mode can be mixed with the turn time limit.

The Sleuth Mode introduces a completely different way to play the game. While the Free for All is turn based and has all the players working against each other, Sleuth Mode slows the game down and challenges the players to not only guess, but to do so by extracting clues from shrouded statements.

Before the game begins in earnest, the top-most Object card is drawn and revealed. This is the Mole’s card. Everyone should take a moment to really study it so they can remember the object on the Mole card with as much detail as possible. Then place the Mole card face-down and draw additional Objects cards so the total number of drawn cards (including the Mole card) is equal to the total number of players in the game. Shuffle these Object cards together and deal 1 card to each player, face-down. Finally, draw and reveal the top-most Object card from the deck and place it face-up in the middle of the playing area. This Object card is referred to as the “Victim”.

One player in the game has the Mole card and is now referred to as the Mole. The Mole does not want to be caught and should remain hidden. Starting with the dealer and continuing clockwise, each player will make 1 factual statement that describes both their hidden Object card and the revealed Victim card, either explaining how they are similar or different.

After everyone has had a turn, the players can talk among themselves for a short amount of time to further discuss the facts. At no time should any face-down cards be revealed and no additional information about cards can be shared. Then the players vote to determine who the majority believe to be the Mole. The Mole does get to vote. After the voting is completed, the player who was voted as the Mole reveals their face-down card.

Children as young as 6-years-old can play this game, but not as easily as their older peers. Your results may vary, of course, but it’s worth noting that a player need not know how to read in order to play. All that’s required is paying attention. If the younger Child Geek would rather always be one of the guessers, the game does not suffer for it. Do not play the game with the turn time limits, but do allow all the players to ask questions.

Older players will also have to “play nice” with younger players, as this is a Real-Time game. You could play in turns, but that kills the game’s energy. Players are meant to actively be involved, jump to conclusions, shout out answers, and grumble loudly in confusion. A smaller voice from a younger player can be lost in the noise and the energy at the table. Be aware of this while playing and I don’t think you’ll have any problems.

The game was initially frustrating to the Child Geeks until they started to understand the meta game within Missing Link. I was at first concerned that the most complicated aspect of the game would be finding common characteristics, but very few of the Child Geeks showed any sign of misunderstanding. The real trick was listening, learning, and putting together the pieces of the puzzle as they were slowly revealed. According to one Child Geek, the hardest part about the game is listening for not only what is said, but what is also not said by the other players.” Better put, if one player phrases a question that asks the active player if both card objects share the same specific color, you can assume that the questioner has already figured out a number of other things. For example, common characteristics like size, ability to fly, and so forth. Or maybe not. That’s the meta game of Missing Link. Another Child Geek said, “I was having trouble at first understanding how to phrase questions and give hints, but you learn pretty fast.” Yes, you do. The learning curve would first appear to be a bit complicated, but every one of our Child Geeks got the hang of it within 2 or 3 turns. When all the games were over, the Child Geeks gave the game the only thing they thought it was missing. Namely, their full approval. 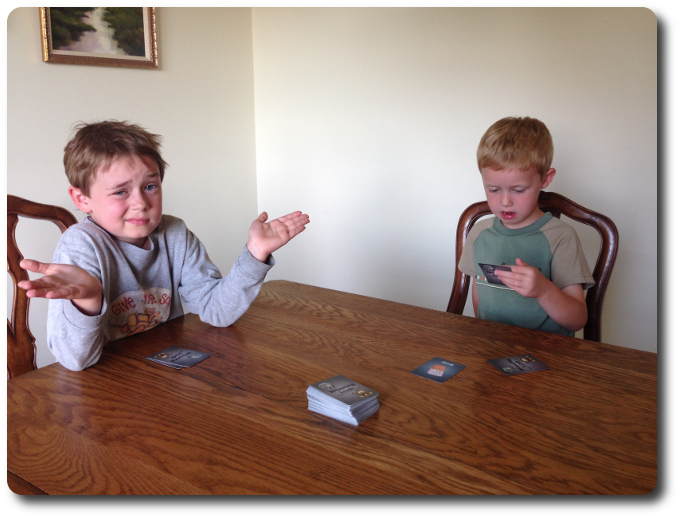 An older Child Geek shrugs his shoulders, not at all clear what the missing link between the cards are

As you have come to expect, the Gamer Geeks were much more critical and unforgiving. None of the Gamer Geeks liked the game’s artwork. According to one Gamer Geek, “No offense to the game’s artist, but it looks like all the artwork in this game came from a clip art library.” Another Gamer Geek said, “The production value is pretty blah. Good thing you put this in front of me otherwise I never would have seen it.” Moving past the game’s looks, the Gamer Geeks focused on the game play. To their surprise, they didn’t hate it. Nor did they love it. According to one Gamer Geek, “The game’s concept is simple, and yet, I have to smile at the game’s hidden level of complexity. This is a game that will challenge players.” Another Gamer Geek said, “A neat concept and an easy one to grasp, but there is just not enough game in here for me. I like that I’m challenged, but I’m not having fun. I must have both.” And yet one more Gamer Geek said, “No, this is not a bad game, but it’s not a game for gamers. I can see this being perfect for families and casual gamers. Especially for those who want a Party game that takes a bit more creativity and brain power than the normal trash out there.” When the votes were in, the Gamer Geek did not approve Missing Link, but they did give it a respectful nod.

This is a game where the players have to bide their time. If they guess too soon, they’ll give their opponents important information. If they guess too late, they’ll miss a chance to score a card. All the while, everything that is said (and not said) is important. How important is going to depend on how the player interprets the information, but one thing is for certain. This is not a game where you will waste words or time. Nothing is obvious, but everything does become more clear. Sometimes clarity comes in a heartbeat and other times too late. When both cards are revealed, side-by-side, the answer will seem really obvious. Expect to feel a bit dumb when you learn the answer was right in front of your face the entire time.

I found Missing Link to be an entertaining Party game presented in the dullest way possible. I am not a fan of the illustrations, but they work well within the context of the game. My preconceived notions of Missing Link were smashed and I am a better player and person for it. I am also just a bit more humble, as Missing Link will have you believe that you are missing your brain most of the time. The end result is a game I enjoyed playing with family and friends. Not too shabby.