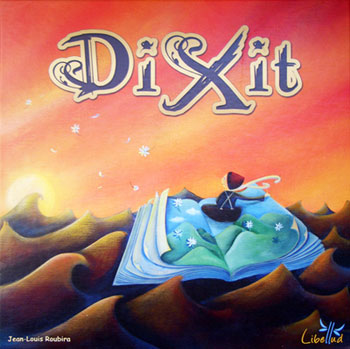 In Dixit, players take turns telling a short story, a description, or even making a sound based on colorful illustrations. This games requires all the players to listen, communicate, be imaginative, and have their wit at the ready.

The game is comprised of 84 colorful and beautifully illustrated cards that depict whimsical and magical places and things, a small wooden “Bunny” for each players that is used to keep score, numbered tiles 1 though 6 for placing votes, and a built-in-the-box score track. All the game components are of high quality and sturdy ensuring hours of great game play for your little geeks, friends, and you.

The illustrated cards are beautiful to look at, which is fantastic, considering they are at the heart of the action. There is nothing to read on these cards which makes it a wonderful game your young little geeks can play, too. Each card shows a whimsical illustration with no context to what is on the card or anything you might consider “descriptive”. Defining the context and what is being shown on the card is the player’s job, but more on that in a moment.

The built-in-the-box score track and the “Bunny” player pieces are also colorful. In fact, even the vote markers are colorful. Shoot, everything is just “beautiful” about this game. The art design was spot on with every aspect of the game, including the packaging . The only bland thing about the game is the single, two-sided instructions, but even that is illustrated! 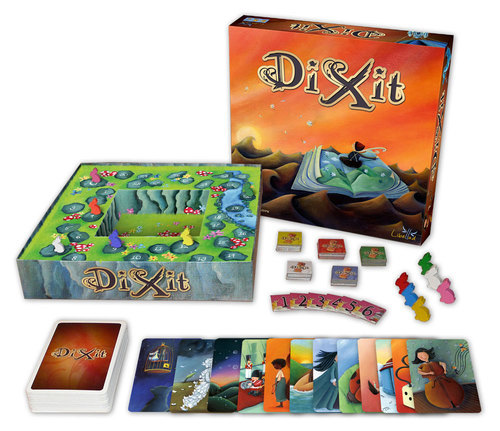 Beautiful and consistent art direction from box to bits!

In this game, all the players participate. There is no down time, but the roles of the players shift. Depending on the role the player has, the goal of their turn is different. There are only two roles, which will make it easy to remember and to play. The roles are “Storyteller” and “Everyone Else”. See? Easy to remember.

If the player is the Storyteller, they look at their cards and think of a single sentence, a sound, a quote from a poem, movie title, or whatever they can think of that would describe one of their cards. This is a little more complex than I am making it sound. First, the illustrations do not provide the player with any clues about what the illustration is about. This is intentional because the Storyteller must not only use their imagination to craft a description, but their description must also not be so descriptive as to actually make it easy to identify the card. Essentially, the Storyteller must balance their description between explicative and purposely misleading. The reason for this will be clear when it comes times to score points.

After all the players have placed a card on the pile, the Storyteller collects the cards, shuffles them, and places them in a line in front for all the players to see. The first card placed is number 1, next is number 2, and so on until all the cards are played. The other players now look at all the other cards and do their best to determine which card is the Storyteller’s. When they think they have figured it out, they select the vote tile that has the number that matches the card they want to vote on and then place the tile in front of them, number side down.

Once all the players have placed their vote tile, they are all flipped and placed on their corresponding cards (vote tile “1” goes on card “number 1”, and so on). The Storyteller reveals which card was the “real card” and points are scored.

After the points are totaled, the “Bunny” player pieces are moved that many spaces ahead on the score track. All the cards played are collected and set aside. One new card is dealt to all the players for a maximum of 6 cards in their hand. Lastly, the role of the Storyteller is passed to the next player. A new round is ready to begin.

The game continues until the very last card is drawn and the players are unable to maintain 6 cards in their hand. The winner of the game is the player who has collected the most points.

Dixit is one of those rare games that can be played with a mixed age and skill group with little to no difficulty. It is because of this that this game is  a big hit in my family. Whenever we have guests over with kids (or even without kids), Dixit makes it to the table. This is also a great game for the non-gamers in your life. The rules are not complex, there isn’t a high level of difficulty, and all that anyone really needs to play is good listening skills and an imagination.

Another benefit of this game is the ability to see how my little geeks interpret stories and images. Many times over, I have been blown away with some of the very imaginative stories or how they intrepidity the stories told to them. What we do when we play (with just the family), is go through each of the cards after they have been played which allows the players to describe what they were thinking. In some cases, this is even more entertaining than the actual game. Hearing my kids tell the story as they understood, it is very insightful and somewhat magical. The imaginative mind of a child is truly incredible.

But the magic of Dixit doesn’t end there. This game is also very playable in any language. Even sign language. Children and adults with speech and hearing difficulties can join right in the fun. Teachers and educators can use this game to stimulate short story writing, impromtu speech practice, or as a psychology experiment to demonstrate how people think based on what they hear. Truly fantastic.

Have I sold you on the game yet?