You are a highly skilled rogue who can steal anything. Of this there is no doubt. But when you are at a table with similar fellows, the best rogue is not the one who steals the most silver, but the one who has the silver tongue.  Continue reading →

The art of storytelling has been around for a very, very long time. As far back as when the human race was still living in caves and being hunted by big cats. We no longer have to hide in bushes and lurk in shadows to avoid man-eating felines, but we do continue to tell stories to both entertain and to educate. In this game, you will compete with others to tell the best story. The winner is the one who knows their audience best. Continue reading →

Legendary graphic novel writer Alan Moore said, “It may be true that the only reason the comic book industry now exists is for this purpose: to create characters for movies, board games and other types of merchandise.” One cannot deny that comic books are a great source for ideas. Full of color and creativity, they inspire us to imagine the impossible. In this game, you’ll get to create your own creative comic. Continue reading →

English-American film director, screenwriter, and producer, Christopher Nolan, said “Superheroes fill a gap in the pop culture psyche, similar to the role of Greek mythology. There isn’t really anything else that does the job in modern terms. For me, Batman is the one that can most clearly be taken seriously.” Batman is a loner, a rebel, and dedicated to his ideals. He’s a hero to many and now you can join him on his adventures. Continue reading →

Mark Twain said, “Truth is stranger than fiction, but it is because Fiction is obliged to stick to possibilities; Truth isn’t.” In this game, players must tell stories that border on the fictional and the factual, but always told with a truthful or dishonest point-of-view. Listeners must pay attention to the details and determine if what they are being told is true or the Storyteller is attempting to pull their leg. Continue reading →

Friedrich Nietzsche said, “The irrationality of a thing is no argument against its existence, rather a condition of it.” In this game, you’ll be asked to describe the impossible to battle the probable. You must talk fast and think faster as conditions change and new story elements are introduced. In the end, what will determine victory is not rational thinking, but creative logic. Continue reading →

Ready! Set! Action! Roll the cubes and tell a story, but this time, the focus is on the actions that take place in the story, not just the who or the where. With 54 actions depicted on the cubes, the stories told around your gaming table will never be short of motion and commotion! Continue reading →

Roll the cubes and tell a tale! Each story will be random and there is never a wrong way to go about telling it! With each new shake, new possibilities will emerge allowing creativity and imagination to go wild! From the very young to the very old, Rory’s Story Cubes will engage and inspire everyone at your gaming table! Continue reading → 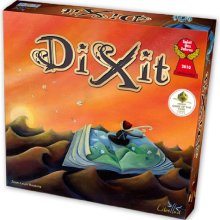 In Dixit, players take turns telling a short story, a description, or even making a sound based on colorful illustrations. This games requires all the players to listen, communicate, be imaginative, and have their wit at the ready. Continue reading →