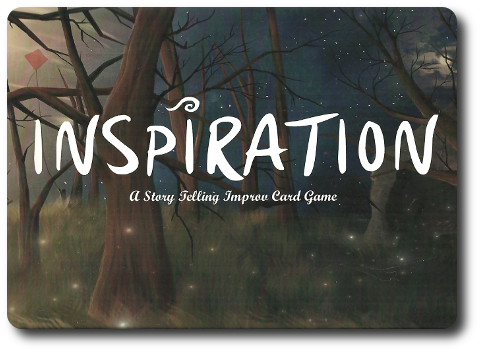 The art of storytelling has been around for a very, very long time. As far back as when the human race was still living in caves and being hunted by big cats. We no longer have to hide in bushes and lurk in shadows to avoid man-eating felines, but we do continue to tell stories to both entertain and to educate. In this game, you will compete with others to tell the best story. The winner is the one who knows their audience best.

Inspiration, designed and self-published by Owen Camber and Crystal Banks, will reportedly be comprised of 60 Art cards, 32 Subject cards, 1 30-second sand timer, and 15 Point tokens. As this is a review of a prepublished game, I cannot comment on the game component quality. The artwork in the game is dark. Think skulls, haunting imagery, and hints of violence thematically delivered using science fiction, fantasy, and horror motifs. Nothing overly graphic or terribly kid-unfriendly, mind you, but the game definitely has a gloomy vibe throughout.

To set up the game, first shuffle the Art cards and the Subject cards into separate decks.

Second, deal 5 Art cards and 3 Subject cards to each player, face-down. Players should keep their cards hidden until played. Place the Art and Subject draw decks face-down and to one side of the game playing area. Place the Point tokens in a pile next to the draw decks.

That’s it for game set up. Time to spin some tales.

Tell Me a Story

Inspiration is played in rounds and turns. There is always one “judge” per round who will evaluate the other players’ stories. The player taking their turn telling a story during the round is referred to as the “active player”. A round of game play is summarized here.

The first thing the active player does is select 2 Art cards from their hand and places them face-up in the middle of the playing area so all players can easily see them.

The Art and Subject cards being used are collectively referred to as the “Story cards”. There should now be 3 Art cards and 1 Subject card visible to all players.

Step 2: Time for a Story

The judge for the round says “go” and the active player now has 30 seconds to tell an entertaining story that uses the face-up Art and Subject cards. The active player must stop as soon as the judge says so, regardless of where they are at in their story.

The Story cards are then put in a pile and handed to the Judge who may use them as reference later in the round.

Steps 1 and 2 are now repeated for the next player in turn order sequence, always skipping over the judge. Repeat steps 1 and 2 until everyone but the judge has told a story.

The judge now decides which of the stories told was the “best”. As determining the best story is highly subjective, there are a few rules that should be considered to help narrow down what story should be selected.

To put it another way, the “best” story should be the one that is the most entertaining, the most interesting, and the one that uses the cards.

After the judge considers all the stories, they select the one they think was the best and give the storyteller 1 Point token.

This concludes the round. All the cards are collected and shuffled again, with new cards being dealt to each player. The player directly to the left of the previous judge now becomes the new judge. The judge can select the first active player and begin the new round when ready.

The game continues as described above until one player has been awarded 3 Point tokens. This player is the game’s winner.

To learn more about Inspiration, visit the games website or Kickstarter campaign.

The Child Geek enjoyed the challenge of creating fun and entertaining stories, as well as listening to the stories told by their peers. None of the Child Geeks seemed to tailor their stories to the specific judge, preferring to instead tell a story they thought was the most entertaining. According to one Child Geek, “What I like best about the game is the ability to use your imagination to win the game.” Stories ranged from creepy monster tales to high-adventure fantasy. In all cases, it was obvious that the Child Geeks were enjoying themselves and the game. As one Child Geek put it, “The best part of this game is playing it. Who cares if you win or not?” When all the stories were told, the Child Geeks voted to approve the game.

The Parent Geeks were just as creative as their children, but they tailored their stories to the judge. This is actually an excellent move, since it’s the judge who determines which storyteller is awarded a Point token. By telling their story in such a way as to appeal to the judge, they set themselves apart from the other stories, making theirs more personal and rememberable. According to one Parent Geek, “There are two tricks to this game. The first is being able to tell a good story. The second, and I think more important, is telling a story the judge will like.” All the Parent Geeks agreed that Inspiration inspired them to not only be creative, but also crafty. The end result was a game that all the Parent Geeks agreed was a good time.

The Gamer Geeks disliked Inspiration a great deal. According to one Gamer Geek, “There is nothing inspiring about this game whatsoever. In fact, I’d like to suggest they [the game designers] did nothing more than reuse other game concepts.” Another Gamer Geek said, “I would rather judge a game off its playability and fun. I think this game is both fun to play and easy to learn, but I’m not overly thrilled by it. It is just another version of the same games I have played.” The Gamer Geeks all agreed that the rules and game play for Inspiration were fine, but none of them believed that Inspiration was a game that was overly unique, interesting, or worth their time.

The game designers readily admit that Inspiration is the love child of Dixit and Once Upon a Time, two storytelling games that go about the same type of game play slightly differently. Where one game has players guess who the author of the story is and the other tasks the players to compete in storytelling, Inspiration takes both concepts and fuses them into one. The result is a game that is the best of both worlds, but also feels overly familiar to a point where players who know both Dixit and Once Upon a Time found Inspiration to be a ripoff. For those players who were not familiar with either Dixit or Once Upon a Time, they herald Inspiration as “ground breaking”. It all depends on your personal gaming background experience.

As for me, I found no fault with Inspiration. I don’t mind it when a game takes different concepts from other games to create something new. The problem I have is that nothing about Inspiration feels new. It’s just another storytelling game from my point-of-view that brings nothing unique to the gaming table, but keep in mind that I’ve played a lot of storytelling games. The important aspect to focus in on is that the game itself is well-designed and fun to play. If you have not played a storytelling game before or are not readily familiar with them, then Inspiration would be a good game to play with your groups.