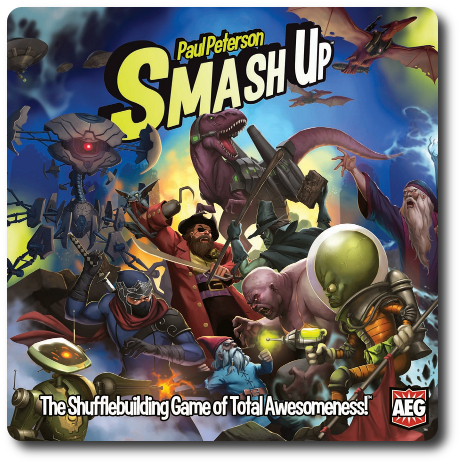 The premise of Smash Up is pretty simple. Take two of the eight Faction decks (that represent iconic heroes of geek culture) and shuffle them together to create a 40 card deck. Use Minions and Actions from that deck to attack and destroy the Bases before your opponent’s do. The faster you destroy a Base, the more Victory Points you earn. The first player to accumulate 15 Victory Points wins the game.

To set up the game, first separate each faction into its own Faction deck and place the eight Faction decks on the table. The factions represented in the game are Aliens, Dinosaurs, Ninjas, Pirates, Robots, Tricksters, Wizards, and Zombies.

Fourth, each player shuffles their two Faction decks together. The Base deck is now shuffled and one Base card is drawn for each player plus one. For example, in a 3-player game, there will be 4 Base cards. These Base cards are placed in the center of the table.

Fifth, each player now draws five cards from their deck, leaving the remaining cards face down in front of them. Players should keep their cards hidden from their opponents at all times. If a player doesn’t draw any Minion cards, they can discard and draw another five cards. The second hand must be kept.

That’s it for game set up. Let the fun begin!

The entire game is only comprised of 3 different card types. Those card types are summarized here.

Each of the Faction decks is comprised of 2 types of cards, Minions and Actions. Minion cards are used to attack the Base cards by being placed beside the Base card in the middle of the table. A player’s Minions and their opponent’s Minions on the same Base card combine their strength to try to destroy the Base. In addition, some of the Minions have abilities that can be activated when brought into play. 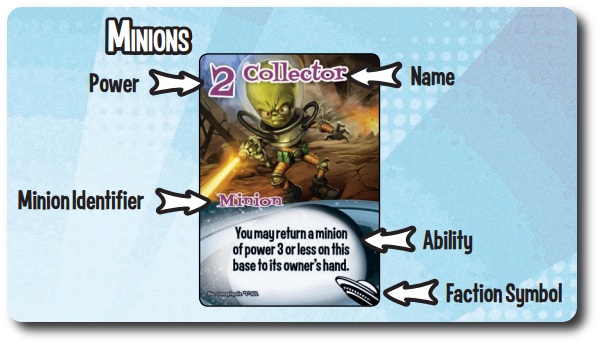 Action cards are typically one-time abilities that are used and then discarded. Actions range from moving Minion cards from one Base to another, destroying Minions, providing the ability to play additional Minions, or an ongoing effect that stays active as long as the card is in play. 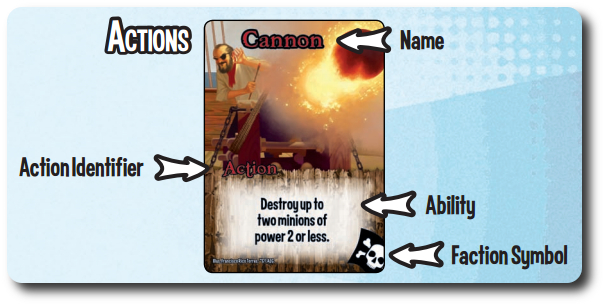 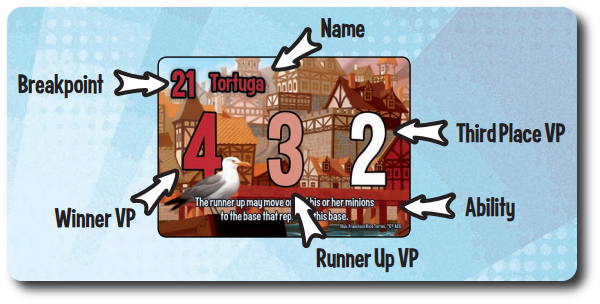 Note: The game play is only summarized here. Review the game’s rule book for complete details.

On a player’s turn, they will first determine if they have any effects or abilities that are triggered.

Then the player can decide to play one Minion card, one Action card, or one of both. Minions are played to a Base card. Actions are revealed to the table and then the Action is resolved. Actions are then placed in the player’s discard pile, unless it has an ongoing effect.

After playing their cards, the player checks each of the Base card’s Breakpoints. If the Breakpoint has been exceeded on the Base, it is scored.

The last thing a player does is draw 2 cards from their Faction deck. The maximum number of cards a player can have in their hand is 10 after drawing their 2 cards. If the player has more than 10 cards, they must discard down to 10.

But right before the player’s turn ends, any “end of turn” abilities or effects are triggered! Play then passes to the left.

After every Base is scored, check to see if any player has 15 or more Victory Points. If so, the game is over and that player is the winner.

To learn more about Smash Up, visit the game’s web site.

At its heart, Smash Up is a simple card game along the lines of Fluxx (we’ve reviewed Cthulhu Fluxx and Oz Fluxx, if you are interested), but not nearly as chaotic. You play an Action, play a Minion (or both), and then draw two cards. The goal is to always gain Victory Points by destroying Bases. The strategy of this game is focused on trying to synergize two faction decks with each other for maximum damage, as each faction plays differently. For example, Dinosaurs are very powerful and have high strengths, Zombies are weak but keep coming at you by special actions that allow additional Zombies to be played from the hand and the discard pile, and Pirates can easily move from Base to Base. This adds to the replayability of the game since you can mix two different factions each time you play. One drawback is that some faction combinations seem to be stronger than others, resulting in some balancing issues that cannot be avoided.

Of all three geek groups, I think Smash Up works best with the Child Geeks. Kids are drawn towards dinosaurs, wizards and aliens. As soon as the box is opened, they will be very intrigued by the game. The art style is very cartoony and child friendly so there is no need to worry about images of scary zombies. As stated before, the rules are simple and as long as the kids can read and understand the cards, they can play the game. Smash Up is highly recommended for this group and was eagerly approved by them.

For the Parent Geeks, Smash Up is a quick game to learn and easy to play. The game play is very casual and light. There’s enough strategy to keep people interested, but it’s not so deep that it will lead to long periods of analysis paralysis. In fact, if you are thinking a lot on your turn, you are most likely playing the game wrong. The Parent Geeks approved of Smash Up with a smile. 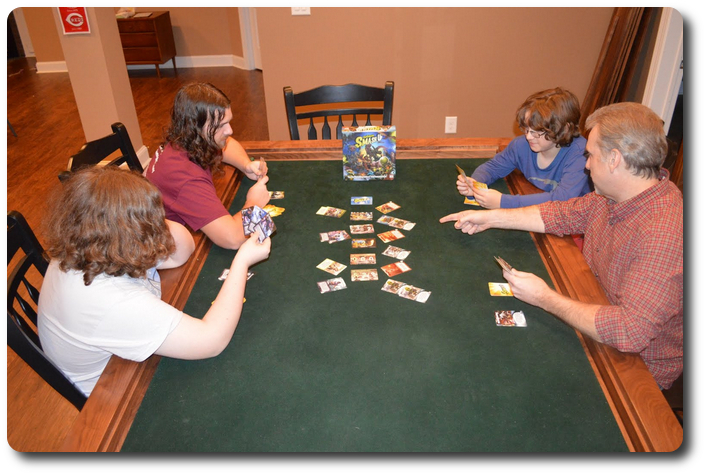 The Gamer Geeks also approved of Smash Up! They found it to be the perfect box of choice to slap on the table when a quick, fun game was needed. All the Gamer Geeks agreed that Smash Up was an excellent game filler or the perfect mental break between heavier games. A very light game indeed, but an enjoyable one to play. No deep strategy or tactics here, but what it lacks in depth is makes up for in speed and fun.

Smash Up is a game that tries to answer those questions geeks have debated for years. What would happen if you mix aliens and zombies? Wizards and robots? It’s a pop culture mashup…err…smashup. Don’t try to reason why these factions would team up in the first place, because that is not the point. Just combine them, give the Faction deck a shuffle, and enjoy the ride. And who knows, maybe the MOTHER OF ALL QUESTIONS that asks who is the greatest, Pirates or Ninjas, will finally be answered!

Unless they team up and fight side-by-side…hmmm…

[Note from the Editor: Dang it, Marty! Now I’m going to be thinking about a Pirate Ninja army all day! Gah!]

10 Responses to Smash Up Game Review