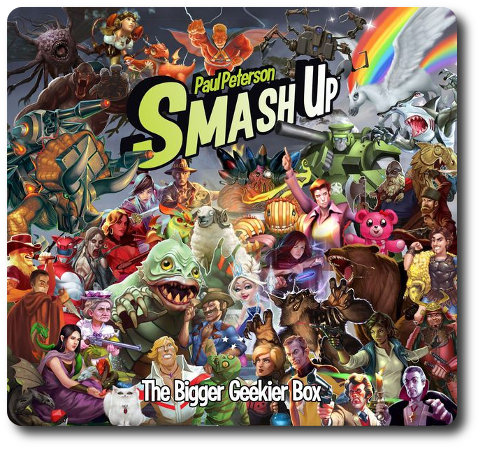 English writer, H.G. Wells, said “The crisis of today is the joke of tomorrow.” For many lovers of board games who have many titles on their multiple shelves (me included), the ongoing crisis is storage. Individual games, no problem. Games with expansions? Many expansions? How the heck do we keep the core game and its expansions in one place? AEG, the publishers of Smash Up, have a BIG solution.

Smash Up: The Bigger Geekier Box, designed by Paul Peterson and published by Alderac Entertainment Group (AEG), is comprised of one very big box, 20 “All-Star” Faction cards, 20 “The Geeks” Faction cards, four Base cards, 58 plastic Faction dividers, and most certainly worth mentioning, one comprehensive rule book that covers all the expansions to date. The quality of the product is excellent. The dividers are heavy and thick, larger than the cards, making it easy to read and to determine what faction it’s dividing. The box is very sturdy, made of thick cardboard. The card troughs in the box (four in total) are deep and wide enough to easily hold the game cards if they are sleeved.

Note: This is a review of a game expansion. You must have the core game, Smash Up, to play. We will not be discussing how to play the game or how it was received by our players here. If you want to learn more about the game, take a look at the review.

The core Smash Up game comes with eight factions and enough room to store a number of additional expansions if you take the inserts out. The thing is, Smash Up, as of this review publication, has more than ten expansions and there is no sign of AEG stopping production on future expansions. Clearly, the core set box won’t do the job if you want to hold all the expansions in one spot. You are going to need a bigger box to contain everything (if you buy everything), unless you are OK with the game being split into multiple boxes.

Are you asking if another “big box” was released for Smash Up? Yes, there was. Good memory.

In 2014, Smash Up: The Big Geeky Box was released that came with a new faction (The Geeks) and enough room to store all the expansions up to the release of the Big Geeky Box. It was well received by the Smash Up fan community. I heard a few people suggest the rule book storage was still an issue, but the general consensus was that the Big Geeky Box was a good purchase for those who had the game and all of the expansions available at that time. Especially after loading the box up with all the available expansions and quickly seeing room for even more. This, of course, had everyone speculating that AEG would release more expansions.

Most importantly, centralized storage. No longer will you have to suffer through the horrible plight of dragging multiple boxes to the gaming table. Now you can plunk down one very large box that holds everything (to date) and promises to store a lot more in the future. If nothing else, you gain a bit of efficiency and can rest easy in the knowledge that you have it all in one place.

Included with the box (which can hold the core set and all the currently available expansions…with sleeved cards), is The Geeks and All-Stars factions, as well as one very big and comprehensive rule book that covers all the factions released to date. That’s right! Put all those rule books away that came with the expansions. All of the expansions to date and the complete rules are now included in one big book.

The Geeks faction (originally released with the Big Geeky Box) is all about changing rules of the game. By itself, not great. Mix it with another faction, and you have a very annoying and possibly unstoppable team. One random faction of your choice to do the heavy lifting and the other, The Geeks, to make all that heavy lifting lighter. No, it won’t break the game if you play with this faction, but do expect a lot of grumpy opponents. 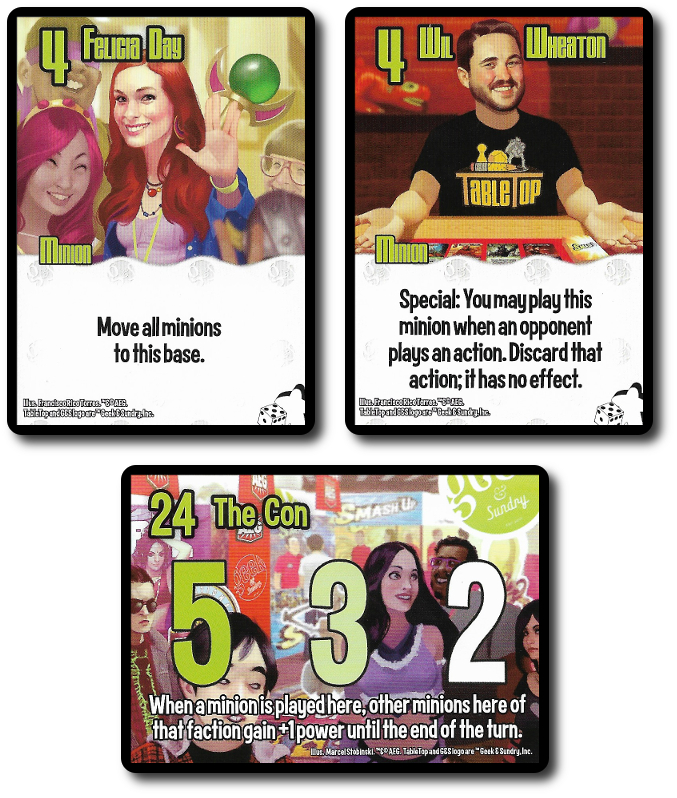 The All-Star faction (originally released as a standalone expansion and available as a prize) is a collection of minions from previously released expansions. It’s a smash up of Smash Up. If you are one of those individuals who hurts their brain trying to determine what the perfect combo of factions is, you can stop that silliness right now. The All-Star faction puts it all together in one spot. Is it the best of the best of the best? Nope. But it certainly is fun to play with. 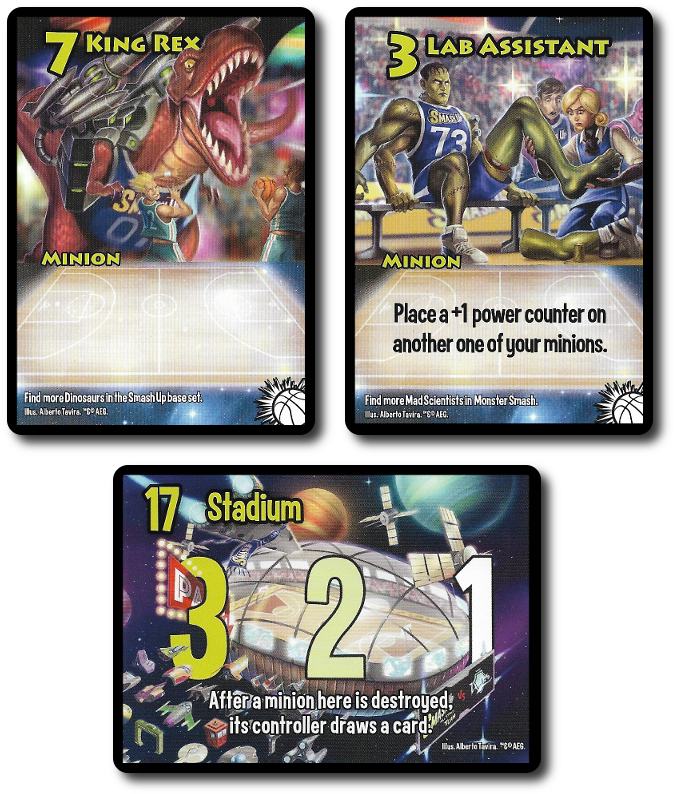 Each faction has a solid plastic divider. There is even one for the Base cards. The dividers are great stuff. Thicker than the cards and bigger, too, making it easy to spot what faction you want to play with and to put it back once you are done destroying your enemies.

Foam pieces are also provided, which might not sound like something to be interested in, but take another look. The foam pieces are intended to help keep everything in the box secure and fill in empty spaces in the card troughs. Move the foam around to make certain that cards stay in one place. Which isn’t really an issue, as the box itself makes certain the cards won’t be flying around.

All the cards go on the bottom. On top is a pull-out tray for any and all tokens. A nice touch, as AEG could have just said “put the tokens in one of the unused card troughs.” Which would have worked, but goes against the idea of why the card troughs exist in the first place. The rule book fits right on top of everything or can be sandwiched between the card and token tray. Your choice.

Yeah, But Is It Really Worth It?

That depends, my friends.

For those who really like the game and want to keep expanding it, you betcha. For those who are happy with just the core set and a few of the expansions, you don’t need this. It’s overkill for all but the most devoted and fully invested fans of the game. That being said, this is a top quality product, clearly designed as a love letter from the game publisher to the game players. Solid construction and room to expand for years and years to come.

If you are a fan of Smash Up and want to show the world that love, do get Smash Up: The Bigger Geekier Box. If you haven’t played the game, you’ll want to start with the core set and take it slow. You have years of catch up to do if you want to get all the expansions. The good news is that not all the expansions are “must haves” and this really big new box certainly suggests that AEG has plans for many expansions in the future. This box will help you contain your geeky game passion as your collection grows, even as your wallet slowly shrinks.