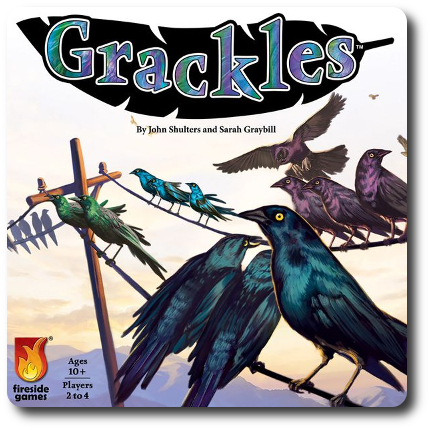 I remember looking out the car window when I was a kid as my family traveled from one end of the United States to another and seeing a long line of birds sitting on a telephone wire. I thought to myself, “what are they waiting for?” Years later, I would watch Hitchcock’s The Birds and know the horrific truth. In this game, you’ll be helping to organize a gaggle of grackles on multiple telephone wires. Lucky for everyone, these birds are here for fun, not for human blood.

Grackles, designed by Sarah Graybill, John Shulters and published by Fireside Games, is comprised of 25 Board tiles, 180 Bird tokens (in four different colors, 45 per color), 20 Rotate tokens (in four different colors, five per color), and four player aids. The Board tiles and Rotate tokens are made of solid cardboard and very durable. The Bird tokens are made of solid plastic. There is little to discuss regarding artwork, as Grackles is an abstract strategy game, and as such, focuses on pure input to the gamer’s mind, rather than candy for the eyes.

Second, find the two starting Board tiles. Each has a half-diamond shape. Place the two Board tiles together in the middle of the playing area, face-up, so that the two-halves of the diamond become one.

Third, shuffle the remaining Board tiles and place in a face-down stack. This is the draw stack for the duration of the game.

Birds On a Wire

Grackles is played in turns with not set number of turns per game. On a player’s turn, they can take one of four different actions, which are summarized here. 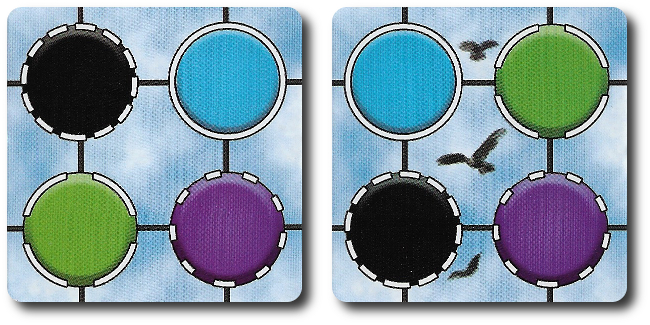 The only limitation when placing the Board tile is that it cannot be placed in any spot where it would remove any possibility of creating a five by five grid of Board tiles by the end of the Game. That is to say, if there is a row of five Board tiles in play, the player could not place a sixth to that row, as that would mean the final grid with all the Board tiles could not be five by five.

The lines on the Board tiles represent telephone wires and the colored circles represent the spaces where birds will sit. The player takes one of their Bird tokens and places it on one empty circle space that matches their Bird token color and one other Bird token, placing it on another unoccupied space on the line that also matches their color. All colored circle spaces that do not contain a Bird token that reside between the two newly placed Bird tokens are now filled, but only on the line (up, down, left, or right) using the telephone wire lines as a guide. The goal is to fill all the circle spaces that are not occupied by a Bird token, but the player can only do so in a straight line. Previously played Bird tokens of another color and Bird tokens of the player’s color stop the player from creating a chain of birds sitting on the telephone wires.

Extend the Line of Bird Tokens

As the game progresses, opportunities will arise that will allow the player to extend previously placed Bird token lines. The player must be able to extend lines in the direction they are going (horizontal or vertical) and only from one end of the existing line at a time.

Rotate One Board Tile

A player may rotate a previously played Board tile that does not have any Bird tokens located on it. This can be done up to five times per game. The new orientation can be anything the player likes, but the Board tile itself cannot change its position in the grid. After rotating the tile, the player places one of their Rotate token near the playing area, indicating that they rotated a tile and showing their opponents how many times they have rotated tiles in the game. It is important to note here that a player rotates a Board tile as a possible last action. This means they are setting up for their next turn, as they cannot place any more Bird tokens on their current turn.

To learn more about Grackles, visit the game’s web page.

The Child Geeks quickly learned the rules and got into the game. According to one Child Geek, “The game is easy to play but not easy to win. You need to be careful about where you place your birds.” Very true. The game is deceptively simple in its approach and description of play. Once you start playing it, however, you realize that there is much more to it than simply placing a token. Since each Board tile only has one space per Bird token color, players have to constantly consider how the tiles are lining up if they hope to place as many tokens as possible. As one Child Geek put it, “I keep my eyes on the tiles more than I do on the birds.” Well said and good advice. When all the birds had landed, the Child Geeks voted to approve Grackles.

The Parent Geeks appreciated the game for its simplistic rules and strategic game play. They found it to be a game they enjoyed both their peers and with their families. One Parent Geek said, “I like games like this. Simple, to the point, and fun to play. A game should be judged on how it makes you feel and how it makes you think. This game made me consider my moves and made me feel like I was accomplishing something every time I placed a token.” Another Parent Geek said, “The game appears to play just as well with adults as with kids. Better yet, a really skilled player doesn’t seem to have any advantage over a new player, which makes the game a lot more fun to play.” When all the birds had flown away, the Parent Geeks voted to approve the game.

The Gamer Geeks appreciated what the game was about and the level of thinking it took to be competitive, but that’s all they agreed with. From there, the camps split almost evenly. Roughly half suggested that Grackles was a “good game”, but was too casual and straightforward to be an elitist’s game. According to one of the Gamer Geeks, “I think the game has merit, but I wouldn’t seek this game out. It lacks the kind of depth and intricate game play I want. It is to repetitive for my taste.” Roughly the other half suggested that Grackles had the best of both world: light fun with strategic game play. According to one of these Gamer Geeks, “The game is simple in its execution, but that is where its simplicity ends. The challenge is right there in front of you and appears to be easy to grasp, but you’ll see that this is a game that constantly makes you reevaluate, ponder your next move, and explore new opportunities.” When all the votes were in, the Gamer Geeks gave Grackles a mixed endorsement.

Grackles is super easy to teach. You might need to demonstrate to the youngest of players, but that’s about it. In fact, we “demonstrated” the game by taking the first turn. That’s all it took and all our players jumped in without any additional help. The only time I saw trouble was when it became obvious that some of our players didn’t see the value in rotating the Board tiles. This is a mistake. At first glance, all the Board tiles look the same. That is, they all have four colors on them. But look again and you’ll see a very important difference. The placement of the colored spaces is different, which means that each tile, while similar in color, is not similar in its layout. Rotating Board tiles is essential to success.

I liked the game and feel it fits nicely with the Gamer Geeks as a game filler and works perfectly for a family game night. My only discouraging remark is that a few of our color blind players had some difficulty with the color scheme, but this only slowed them down. It did not stop them from playing or having fun. Or even winning, for that matter.

Do try Grackles when time allows. Its simplistic approach to strategic game play will make your brain take flight and soar with creative problem solving ideas.