American actress, producer, and designer, Sarah Jessica Parker, said “A squirrel is just a rat with a cuter outfit!” Feelings towards squirrels tend to be polarized and can shift rapidly. For example, a person can admire a squirrel in the wilderness and then be hellbent on destroying them if they find out they are in their house. Such is the dangerous life of a squirrel that you now get to live.

Squirrel or Die, designed by Seppy Yoon and published by Fight in a Box, is comprised of 28 wooden tiles and 1 cloth bag. The wooden tiles are very durable and excellently cut. Quality through and through.

The End of Summer

To set up the game, first remove a predefined number of tiles. The number removed is based on how many players are at the table. The removed tiles are out for the duration of the game and help keep the “Death to Squirrel ration” at a fixed point.

Second, place the remaining tiles in the cloth bag and mix them around. Draw 1 tile, and without looking at it, place the tile face-down in the middle of the play area. Then draw 3 more tiles and place them face-up and adjacent to the face-down tile to create a 2×2 square tile grid.

Third, each player draws 3 tiles out of the cloth bag and places them face-down in front of them. Players should look at their tiles, but keep them hidden from opponents.

When all player have their 3 tiles, pass the cloth bag to the first player and begin.

The Start of Autumn

Squirrel or Die is played in turns with no set number of turns per game. The first half of the game is referred to as “Autumn”, where players will be building the grid in front of them and trying like crazy to remember where tiles are placed. Plays starts with the first player and continues clockwise.

On their turn, the player draws 1 tile from the cloth bag, looks at it, and then places it to the grid, face-up. The tile can be placed adjacent to any previously placed tile in the grid. The dimensions of the grid are defined by the number of players in the game. Players cannot place a tile if it would make a row or column exceed the maximum length or width. For example, a 4-player game is limited to a 5×5 square tile grid.

If all the tiles are in play (meaning there are no more to draw), the player skips drawing from the cloth bag and swaps out 1 of their tiles for a face-up tile in the grid. When there are no more face-up tiles to swap, the player places 1 of their face-down tiles anywhere on the grid, face-down, and within the predefined limits of the grid dimensions.

The player’s turn is then over.

When all the tiles have been played to the grid, Winter arrives. Autumn is now over and the players have hidden their nuts, fruits, and seeds. Among the food are traps and dangers. The players will now use their memory to help them survive. All tiles should now be face-down and in the grid.

Starting with the first player and continuing in turn order sequence, each player will select 1 tile from the grid, reveal it, and then place it in front of them. What they reveal is very important.

If a player draws a “Food” tile, they get to eat and survive one more day. Their turn is now over after successfully finding a meal.

If a player draws a “Danger” tile, they become badly hurt. The squirrel skulls on the tile indicate how bad off the player’s Squirrel is. If the player ever collect 3 or more Squirrel skulls during the game, they have lost.

The game continues until only 1 player remains. This player is the winner and has survived a harsh winter. If there is a tie, the player who collected the most “Food” tiles wins.

Two game variants are provided that allow the players to get a bit nutty with the game play.

This game variant puts the Birdhouse tile in the middle and face-up during game set up, along with 3 other face-up tiles. The Birdhouse remains face-up during the entire game, giving players a visual reference point to help keep track of where tiles are located when placed face-down.

This game variant places the tiles in the middle of the playing area face-up. On a player’s turn, they take 1 face-up tile and create their own grid in front of them, placing the tile face-down. When all the tiles are have been selected, players pick 1 tile from any opponent’s grid for their turn. Thematically speaking, each player is creating their own backyard.

To learn more about Squirrel or Die, visit the game’s web page.

The Child Geeks were both frustrated and entertained by this tile game. A number of them very quickly determined that the best course of action was to always put the bad tiles to one side of the grid from their point of view. This worked until the other players caught on. According to one Child Geek, “The most frustrating part of this game is getting a bad tile, but it’s fun to watch the other players get them.” A mixed bag? It certainly seemed so at first, but the Child Geeks enjoyed themselves more and more. As one Child Geek put it, “The first time I played this game I thought it was a kids game, but it’s like walking through a midfield as a squirrel.” Interesting imagery. After all the games were over, the Child Geeks thought the game was fun. Fun enough to give it their approval. 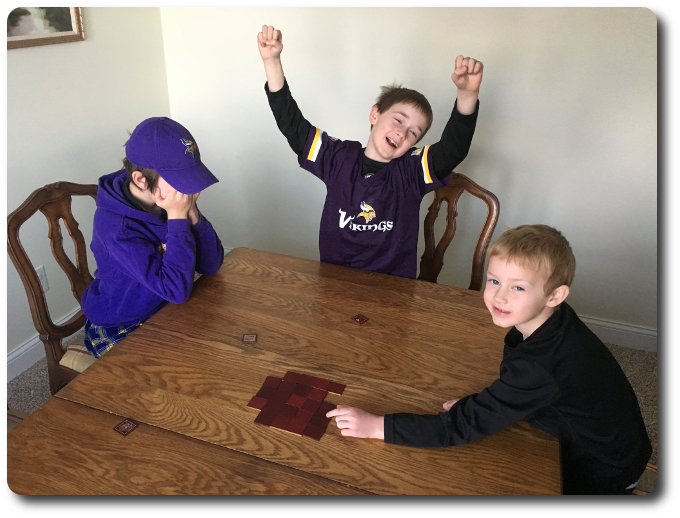 Winning any advantage in the game was celebrated, but also lamented

The Gamer Geeks didn’t think much of the game, finding it to be too simple and lacking depth of play. According to one Gamer Geek, “All I’m asked to do is memorize tile locations, but what’s the point? To last longer? I’d rather just die and get it over with.” Another Gamer Geek said, “I’m not a fan of Memory games in general and this one hasn’t changed my mind.” What the Gamer Geeks didn’t care for the most was the overall feeling of being helpless. What little information they were given didn’t amount to enough to win the game. What it did do is allow players to stay in the game longer, which none of the Gamer Geeks wanted to do. The Gamer Geeks rejected Squirrel or Die.

I was introduced to Squirrel or Die as a light filler game with a mixed group of people who wanted to eat up some time. The place happened to be a pub and we didn’t have much space. Squirrel or Die worked beautifully and was well received. When I played the game again a few months later at someone’s home, it was again introduced as a light filler. Here it did less well, although it had all the space it needed (and then some). The playing group was more or less comprised of the same folks, too.

So why was it well received in one location and not another? Does location make a difference for games? As it turns out, yes, but it rarely makes a huge difference. Squirrel or Die is a game that feels perfect when it fits the situation. I tested this and played the game on a very small table in a crowded room. As I thought, it was well received. The same game played on a big table, not so much. I personally find this fascinating and wonder if marketing teams take this into consideration.

Squirrel or Die is neither a difficult or overly engaging game. It requires memory, to be certain, but having the sharpest of memories won’t save you from the high level of random tile placement and removal. It’s a very casual game that focuses more on the players at the table than challenging them. It’s a game that wants to be social and wants the players to be social, too. Nothing wrong with any of that, but as I already stated, the game tends to sink or swim based on the environment it’s played in. It seems to play best in loud and crowded locations.

Good game? Bad game? Neither, I’d say. It entertained some of us and disappointed others. We found it to be the perfect side game in crowded areas and forgettable in quiet rooms with large gaming tables. I’d recommend the game for those who frequent coffee houses and pubs, or need a quiet game for a select few in the corner of a noisy room. It’s also a game that would travel easily, being completely contained in a cloth bag and consisting of nothing more than a small number of wooden tiles.

I didn’t go nuts for the game, but nor did it drive me nuts. I felt entertained enough to smile and hate squirrels just a little bit less, as a result. Give it a try.