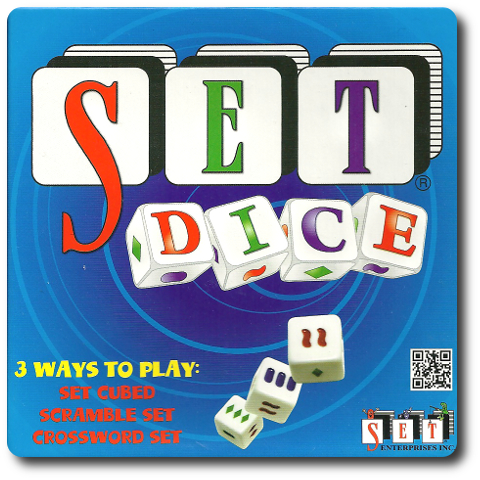 Dutch graphic artist, M.C. Escher, said “We adore chaos because we love to produce order.” Which is to say, as we seek order in our own lives, we also seek out those pockets of disorder to tackle. Balancing our checkbooks is a good example. In this game, random outcomes will challenge players to find order betwixt the chaotic results of rolling dice.

Set Dice, designed by Marsha J. Falco and published by SET Enterprises, is comprised of 42 large custom six-sided dice, 1 game board, and 1 cloth bag. The dice are solid and have a good weight to them. The game board is thick and durable. Not included with the game, but necessary to play, is a pen or pencil and a piece of paper to keep track of scores.

What Is A Set?

All a player needs to do is answer “Yes” to the following three questions.

If you can match the 3 rules above, you have a set. The one exception to the above rules are the “Wild” dice values which can represent any symbol, any color, and any number.

Set Dice is 3 games in 1. Each are summarized here.

This game is for 2 to 4 players and uses the game board. All the dice are placed in the cloth bag and then players grab 5 dice each. All dice are rolled and players simultaneously attempt to identify a set using their own dice. The first player to see a set and announces it gets to place their 3 dice in the middle of the game board.

Each player, in turn order sequence, then can attempt to place up to 3 dice on the game board, creating sets by using previously placed dice. Each set created is worth 3 points. Some spaces have bonus point values. If a player place their dice on these spaces, that earn the indicated number of bonus points. 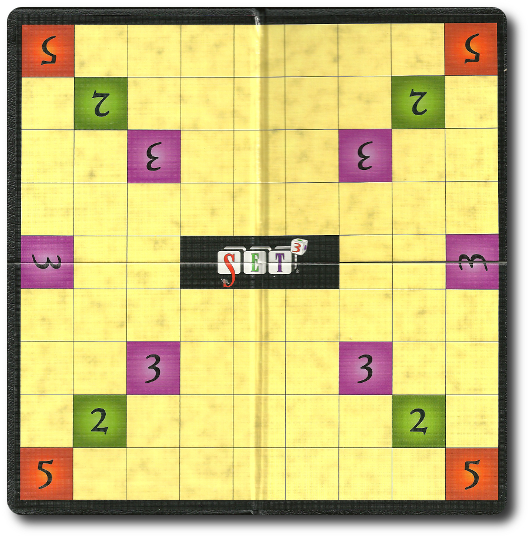 If a player is unable to create a set, their turn is skipped. A single round of game play is completed when everyone has had a chance to place dice to the game board. At the end of the round, each player grabs enough dice to bring them back to 5 dice to roll. Play continues until 1 player has run out of dice and cannot draw additional dice from the cloth bag. The round is then completed and the player with the most points wins the game.

To begin, take all the dice in the bag and roll them to the middle of the playing area, rerolling any dice that are stacked on each other. On the word “GO!”, all players scan the dice to complete a set, calling them out when they see them. When the set is called, the player can take the dice and place them in front of their playing area. Other players can check the set if required.

There are no turns in this game (all players look for sets simultaneously) and game play continues until all the dice are taken or all players agree that no additional sets can be made using the dice that remain.

Players now take the dice they captured and attempt to make as many sets as possible. No die may be used in more than 1 set and any “wild” dice can represent any die with any feature. The sets are counted for each player and recorded. A new round now begins by taking all the dice, putting them in the bag, and repeating the same steps to find as many sets as possible.

After 5 rounds, the players tally up their scores. The player with the highest score wins the game

This game challenges players to take 10 dice and arrange them in front of their playing area so sets are created using rows and columns like a traditional crossword. All 10 dice must be used and a single die can be part of 1 or more horizontal and vertical sets. 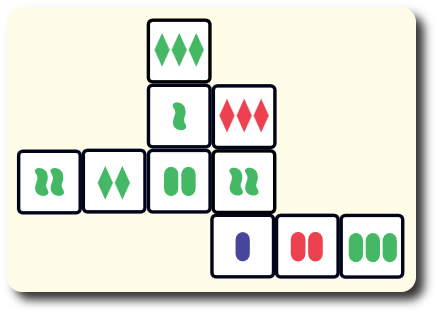 Example of rows and columns with 10 dice

“Wild” dice can only be assigned 1 specific feature in a set.

Players can never reroll their dice, but they arrange them as many times as they like. There are no movement limitations or restrictions.

The winner of the game is the first player to use all their dice to create multiple sets using the crossword structure.

A number of Child Geeks have played Set before and some of the them dreaded sitting down to play Set Dice. The game can either suck you in or chew you up. The 3 different games gave the Child Geeks some flexibility. This helped ease some of the stress, but not all of it. According to one Child Geek, “I don’t care if it is dice or cards, these games are hard!” Set Dice is not a game you give to Child Geeks when they are sleepy or hungry. The game requires a lot of concentration and the real-time game playing keeps everything moving at a breakneck speed. This was found to be too much by some Child Geeks and a blast by others. According to one Child Geek who was having a great time, “I like this game because you have to be really fast and it feels awesome when you find a set!” When all the votes were in, the Child Geeks gave Set Dice a mixed level of approval. 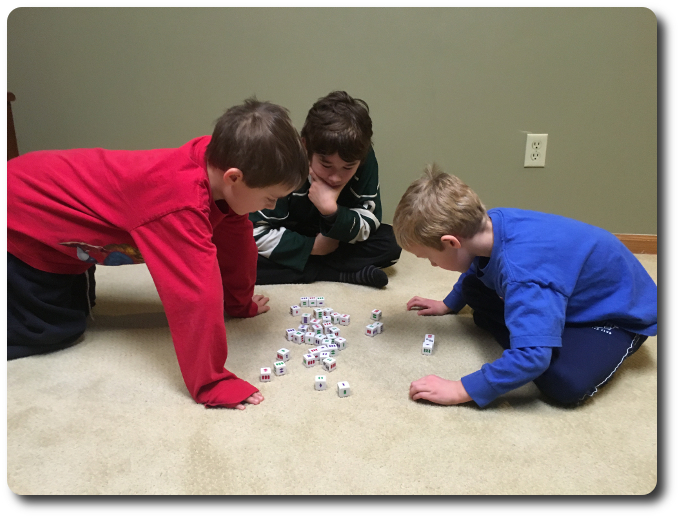 I normally tell my kids to “keep the dice off the floor” (having stepped on many), but it works for this game

The Parent Geeks found Set Dice to be an engaging and challenging thought exercise that kept them glued to the table. They were just as frustrated as the Child Geeks, but their frustration never manifested into temper tantrums or storming off. Instead, the Parent Geeks displayed their frustration by massaging the bridge of their nose, breathing out sighs of frustration, and exclaiming the occasional curse.  According to one Parent Geek, “It can feel maddening at times to race and find something that you hope is there. My eyes hurt after a bit, but it’s fun.” Another Parent Geek said, “A challenging bunch of games and I love how the dice are used. I think this will do great with the families and with adult friends.” When all the games were over, the Parent Geeks voted to approve Set Dice.

The Gamer Geeks were not impressed with the game. The knew all about Set and everyone had played it a number of times before to quickly understand what the games were about. One aspect of the game that really bothered the Gamer Geeks was the use of “Wild” sides for the dice. They felt this was unnecessary and actually caused more problems. According to one Gamer Geek, “If I use this Wild for a red squiggle I now have to remember that for the rest of the game. I’d rather just keep looking for a red squiggle.” A few of the Gamer Geeks also felt that Set Dice was unnecessary. According to one of these Gamer Geeks, “The card version is fine and plays well enough. Using dice is interesting, but it just feels unnecessary and doesn’t seem to add much of value other than something different that is actually the same.” When all the games were over, the Gamer Geeks voted to reject Set Dice.

Set Dice is a game that will force you to think and think fast, but not all the time. The 3 different games each approach the same challenge differently, giving players an opportunity to find a game that is more their speed. I found this to be a very good thing, as the original card game threw everyone in the same situation. Set Dice does that a little bit, but it has built-in moments where players can pause and regroup. The games are still frustrating at times, however, so don’t go thinking that Set Dice is going to take it easy on you.

Frustrating? Sure, you bet. I wanted to walk away and punch a pillow once a twice. But the game kept me involved and engaged. Each roll of the dice offered a new opportunity to jump ahead, but it was just as likely that the dice wouldn’t help you advance. It’s all up to the player and how quickly they can scan and identify patterns. Very challenging at times, especially when you know that everyone else is doing the same. If you have enjoyed Set in the past or are looking for a new game for family and friends that will challenge everybody, do take a look at Set Dice.