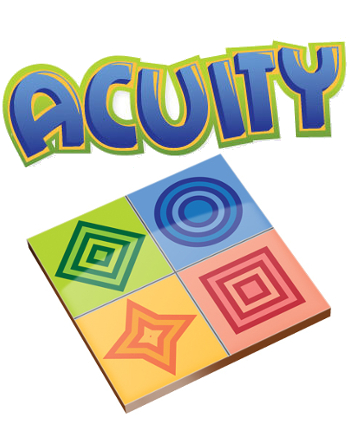 The definition of acuity is “sharpness or keenness of thought, vision, or hearing.” The game is aptly titled as you need sharp eyes to spot patterns, a quick mind, and a keen ear. This is not a game that is played seated down, but you will most likely want to sit down and rest after playing it.

Acuity, designed by Rebecca Bleau, Nicholas Cravotta, and published by Fat Brain Toys, is comprised of  70 Acuity tiles. Each tile is thick, durable, and colorful. A very well made game and not much to it.

To set up the game, first randomize the Acuity tiles and put them into a stack.

Second, randomly deal 36 Acuity tiles to create a 6×6 grid. When placing the Acuity tiles, make sure they are face-up. Orientation of the tiles is not important, but do leave enough room between each tile so as to allow players to easily pick them up.

Third, leave the remaining Acuity tiles in a stack and place them to one side of the game playing area, face-down.

That’s it for game set up. Time to see how fast your brain and eyes are.

Acuity is played in rounds and is a Real-Time game (everyone plays at the same time). A typical game will consist of 34 rounds. Don’t let the high number of rounds frighten you off; this is a very fast game. Each round consists of matching 1 Acuity tile from the stack to the Acuity tiles in the grid. A typical round is summarized here.

Any player can start the round. Simply draw and reveal the top-most Acuity tile from the stack and place it down so that all the players can see it.

All the players now attempt to match the revealed Acuity tile pattern to one or more Acuity tiles in the grid. A player can make a match as follows. 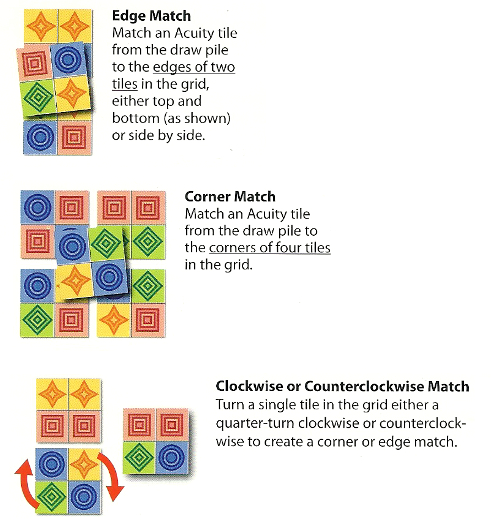 The first player to make a match wins the Acuity tile. The round is over and a new round begins starting with step 1 above.

Is It Really That Easy?

In short, no. Some matches are quickly identified, while others are not .Players will need to rotate the tiles and rotate themselves to attempt to make a match. Do expect players to get up from the table to look at the Acuity grid from a different angle. It surprisingly helps.

It’s also possible, because the Acuity grid is always randomly built, that a match is impossible to make. If a player believes that a match is either impossible or too difficult to find, they can “challenge”. Once the player “challenges”, all the other players have 30 seconds to make a match.

The game ends after the last Acuity tile in the stack has been collected. All the players now count their collected Acuity tiles. The player with the most Acuity tiles wins the game.

A few Child, Parent, and Gamer Geeks thought it would be great fun to shout “CHALLENGE” as soon as the Acuity tile was revealed. More times than not, this actually allowed them to win the tile. However, this also broke the game. We created a house rule that forced players to wait at least 30 seconds to challenge the round.

To learn more about Acuity, visit the game’s web page.

Acuity is going to be a game a player either really enjoys or highly despises. What is going to determine the player’s love or hate for the game is their own level of frustration when attempting to match a tile. This game is deceptively simple when you explain how it’s played. Once the game starts, I expect to see players sit forward with excitement or pull back out of growing disgust.

For the Child Geeks, I expect mixed results at best. This is not a game the Child Geeks will be able to win if they are playing with older and more experienced players. That’s going to frustrate them to no end. For the Parent Geeks, I think they’ll find the challenge and casual game play to be a perfect mix. The Gamer Geeks might find the game’s level of difficulty and focus to be interesting, but the repetitive nature of the game play might turn them off.

Teaching Acuity is best done by building the grid and then walking players through the 3 different ways to match a tile. After players understand how the matches are made, let them play a practice round or two. This is a great way for the players to experience the intensity of the game play without it negatively impacting their score. Note that the game doesn’t require any reading, but it does require a lot of concentration. There is no reason why a younger Child Geek couldn’t play if they understood the goal. Players who have difficulty distinguishing colors will be able to play Acuity without issue. Each color has a unique symbol that can be just as easily matched as the colors.

And so, after teaching Acuity to my 3 little geeks, I asked them their thoughts on the game so far.

My 4-year-old says he understands how the game is played, but I have my doubts. As I stated, the game requires its players to really concentrate. That level of focus might be too much for my 4-year-old to maintain. Let’s play and see if Acuity is a match made in heaven for our players.

To be clear, my 4-year-old could play Acuity. He just couldn’t play it competitively. The game was too fast for him and that left my 4-year-old frustrated and flustered. When he played the game with just me, he had a great time. I’m not going to suggest the age range be as low as 4, however. My 6-year-old had no problem and that matches the publisher’s suggested age minimum. For those Child Geeks who played it, they had mixed feelings about the game after it was put away. According to one Child Geek, “That was a challenging game! I’d play that again, but I need my brain to cool down first.” Another Child Geek said, “I never want to play that game again. I could never find a match.” As predicted, the Child Geeks found Acuity frustrating. That was enough for some Child Geeks to dislike the game and others to simply acknowledge it was a difficult game to win. The end vote resulted in a mixed approval from the Child Geeks. 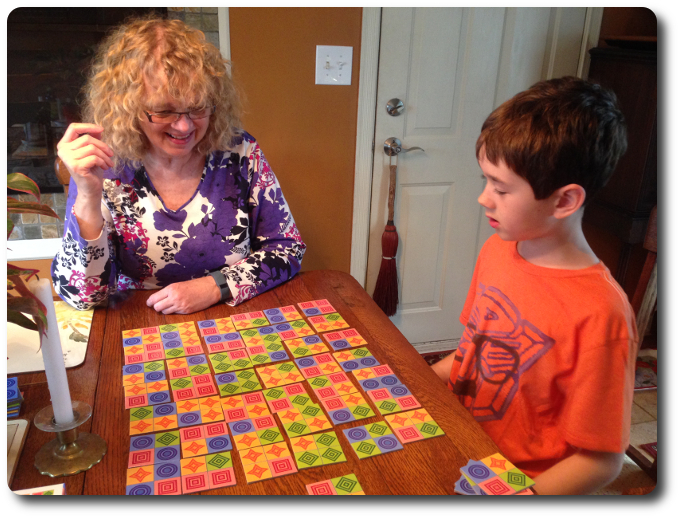 A game in progress – seconds later, my 9-year-old would shout “CHALLENGE!” and win the tile

The Parent Geeks found the level of focus and quick bursts of play to be enjoyable and a bit chaotic. They liked how easy the game was to set up and how fast it was played. According to one Parent Geek, “The moment the round starts I’m all like, OH NO! I admit that it’s a relief when the round is over. Feels even better if I make the match!” Another Parent Geek said, “This is a challenging game. Sometimes the pattern match jumps right out at me and other times I don’t see it, even if someone points it out.” All the Parent Geeks voted to approve Acuity.

The Gamer Geeks liked the game’s level of intensity and challenge, but as expected, not the 34 rounds of the same thing. Reducing the tiles to be won helped, but the overall reaction to the game was mixed. According to one Gamer Geek, “I like this. It’s a pretty fast and intense game. I’d play it again.” Another Gamer Geek said, “Hell. No. Never again.” From what I observed, it would appear that a Gamer Geek liked the game if they enjoyed intense game play and were highly competitive. If a Gamer Geek enjoyed slower games with more strategy and tactics, Acuity failed to impress. The end result was a mixed level of endorsement from the gaming elitists.

I’m also a bit mixed when it comes to this game. I like the concept, but find the game play to be too intense to be fun. Each round feels a bit like a chore and can be stressful. I’m always scanning the same grid for 34 rounds and that feels monotonous at times. Overall, I think it’s an OK game, but not one I will want to play too often.

If you enjoy intense Puzzle games and Real-Time games mashed together to create an experience that might give you a nosebleed, do take a look at Acuity.