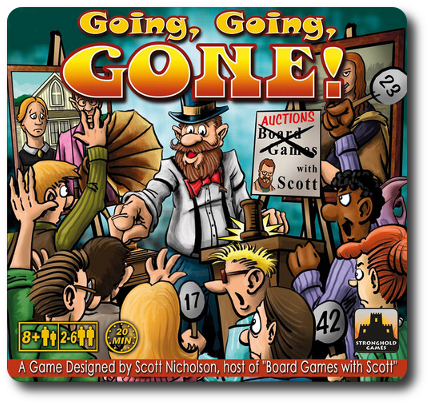 Marcus Aurelius said, “Look beneath the surface; let not the several quality of a thing nor its worth escape thee.” We are immediately drawn to BIG, BOLD, and FLASHY things. Kind of like a moth to a flame. It’s only after our mania subsides that we take stock and realize that all that glitters is far from gold. In this game, expect to be swept up in the excitement of the bid and then immediately feel buyer’s remorse.

Going, Going, GONE!, designed by Scott Nicholson and published by Stronghold Games, is comprised of 240 Buck cubes (in 6 different colors, 40 per color), 5 Bidding cups, 10 “10 Buck” chips, 49 Item cards, and 1 Auction paddle. The Auction paddle doubles up as the game’s rule book. The cubs are made of wood, the Bidding cups are made of plastic, and the Item cards are about as thick as your standard playing card.

To set up the game, first have each player take 25 Buck cubes of a specific color. Each player should have different colored cubes. All remaining cubes should be placed to one side of the game playing area.

Second, place the 5 Bidding cups in a circle in the middle of the playing area. All the players should be able to easily reach the cups from their sitting or standing position.

This completes game set up. Determine who will be the first Auctioneer and begin.

On the Auction Block

Going, Going, GONE! is played in rounds. This is a Real-Time game, meaning all players participate at once. A single game round is summarized here.

Players will take turns being the Auctioneer. The Auctioneer randomly deals 7 Item cards, face-up, to the Bidding cups. No more than 2 Items can be attached to a Bidding cup at anytime. This means that some Bidding cups will only have 1 Item card.

The Auctioneer now starts a countdown from 10 to 0 at any speed they like, but the pace must be steady. That is, the seconds (or lack thereof) between the numbers must always be called using the same cadence and ends with the Auctioneer shouting “GONE!”. At which time, they place the Auction paddle over the cups. 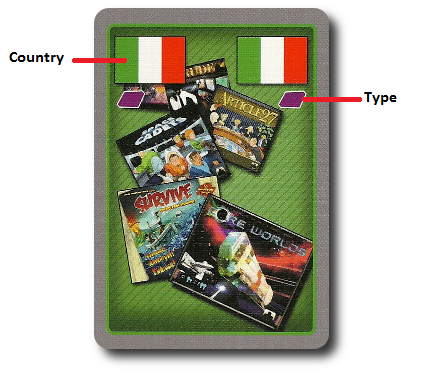 Oh, I see what you did there, Stronghold Games…

Players who lost the bid have all their Buck cubes returned to them. Any item cards not claimed are removed from the game.

At the end of the round (or before it – the rules do not really state), players can sell their Item card collections. Collections are based on either Item card type or country, not both. The more Item cards in the collection the player has, the more it’s worth. For example, 1 Item card is worth 2 Buck cubes, but 7 Item cards is worth 44 Buck cubes. If the player is worth more than there are Buck cubes, use the “10 Buck” chips. Any Item cards sold are out for the duration of the game.

This completes the round. The next player in turn order sequence is the Auctioneer for the next round.

The game continues for a total of 7 rounds. After the 7th round is completed, players determine the value of their collections, organizing them in whatever way they think will make them the most valuable. Note that Item cards can only count towards a collection once. Then the players count up the number of Buck cubes they still have. The player with the highest combined value of collections and Buck cubes is the winner.

Keep all collected Item cards and sold collections face-up throughout the game. This allows players to keep track of what cards are have been collected and are no longer available. Useful information for those looking to collect specific Item cards.

The rules do not state when players should be allowed to sell collections. We decided that the best time to do this would be after the Item cards are revealed for the round and before the bidding began. This gave our younger and less experienced players a chance to breathe, reflect, and sell collections in hopes of obtaining an advantage.

I’ve been looking forward to getting this game to the table, but have been unable to find the right moment. Going, Going, GONE! is a game that sounds easy to teach, fast to play, and could lead to a lot of heartache. The game can be fast or crazy fast, depending on how quickly the Auctioneer counts down. That might be a bit too chaotic for some of our younger and less experienced players. However, chaos oftentimes means fun, especially when everyone at the table is swept up with it. I predict the Child Geeks will enjoy the game (but not really understand the subtle strategy and tactics of the game play), enjoyed by the Parent Geeks, and found agreeable by some (not all) Gamer Geeks as a novelty game.

Teaching Going, Going, GONE! is best done by first explaining the game’s goal, which is to make money. Make sure the players understand that the Buck cubes are what they will spend, but also what they want to keep. This can be a bit tricky for younger and less experienced players to grasp at first, as it’s contrary to the game’s goal. Why get rid of what you want to keep? The answer is simple: because you have to spend points to make points. This is when you introduce the Item cards and explain how they should be collected and what a collection is worth. You’ll be blinded by the number of light bulbs that flicker on above your players’ heads as they suddenly understand the game in its entirety.

After teaching Going, Going, GONE! to my two oldest little geeks, I asked them their thoughts on the game so far.

No, you certain may not, but it’s going to happen. Especially in the last frantic seconds of the bid. Hopefully the cubes won’t travel far. Let’s appraise Going, Going, GONE! and see if it has any value.

The Child Geeks had a wonderful time with the game and really didn’t seem to care if they lost or won. They enjoyed the frantic nature of the game play and the amount of energy it created at the table. They jumped up and down excitedly, carefully inspected the Item cards, and dropped cubes into the cups like pros. I didn’t observe anything to suggest that there was much strategy behind what items they collected, but they did have their favorites. The Child Geeks tended to collect that which they liked. Toys, video games, comics, and such. Oddly, that was more than enough to help many Child Geeks either win the game or come very close. When Going, Going, GONE! was put away, all the Child Geeks voted to approve it.

The Parent Geeks also found the game to be a great deal of fun, but their bids were much more methodical in nature. The Parent Geeks not only watched their bids, but also their neighbors. This is where Going, Going, GONE! goes from being a silly “drop the cube in the cup” kind of game to “how can I skunk my dearly loved friends” kind of game. Put another way, it was obvious to me that some of the Parent Geeks were collecting Item cards they really didn’t intend to build upon, gathering them instead to ensure their opponents didn’t have an opportunity to create large collections. Not a bad strategy, but ultimately somewhat unnecessary. Every Item card is worth points, no matter how many are in the collection. Still, the overall value of a collection jumps quickly the more cards it contains. According to one Parent Geek, “This game is a lot of fun, fast, and makes me smile. I can’t believe how fast it goes.” Fast and fun? That was the gist of it. All the Parent Geeks voted to approve the game. 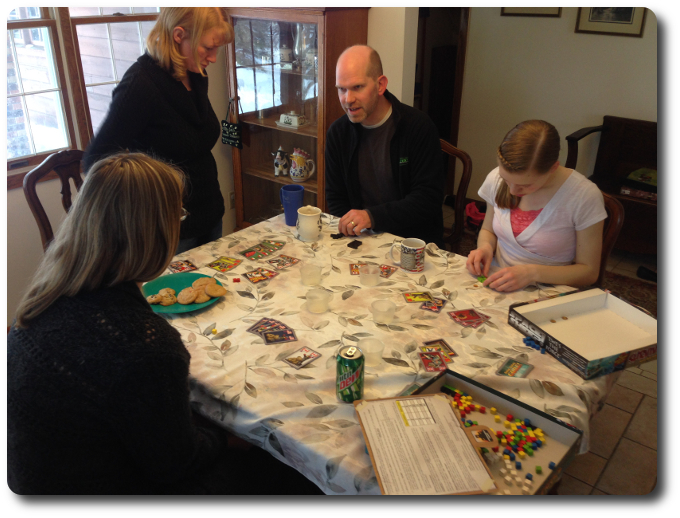 The Gamer Geeks understood the game immediately and took to it with a smile. Their first game was a great success, but they didn’t feel the need to play it again. According to one Gamer Geek, “This game is fun, but not something I would want to return to. It felt repetitive towards the end.” Yes, each round is the same, but there are only 7 and the game takes less than 20 minutes to complete. The Gamer Geek shrugged indifferently to my comment. Another Gamer Geek stated, “This is a great game that I would gladly play with whomever was around.” A number of other Gamer Geeks also agreed, finding it to be a good candidate for a game filler or a quick energizing game to get the blood and mind flowing after a long game playing session. When the votes were tallied, the Gamer Geek approval was mixed. Some thought it was a great deal of fun and some thought it was just a distraction.

I enjoyed my time with the game and found it to be a great deal of fun to play with my family and peers. Not as much fun with the Gamer Geeks, but there were a few that seemed to enjoy it as much as I did. The defining moments for me were when one of the Parent Geeks threw his Buck cubes up in the air above the Bidding cups like so much confetti and when my wife, knowing she was tied with another player, sped through the auctioneer round with a countdown that broke the sound barrier.

I would classify Going, Going, GONE! as an Action / Dexterity “family game” and something of a novelty. It’s different enough to be feel unique, but that feeling of playing something new and exciting goes away by the time the game ends. As such, I don’t see the game hitting the table often with my normal Gamer Geek crowd of players, but it remains an excellent candidate for dinner parties, family gatherings, or when I have an itch to play a very fast set collection auction game.