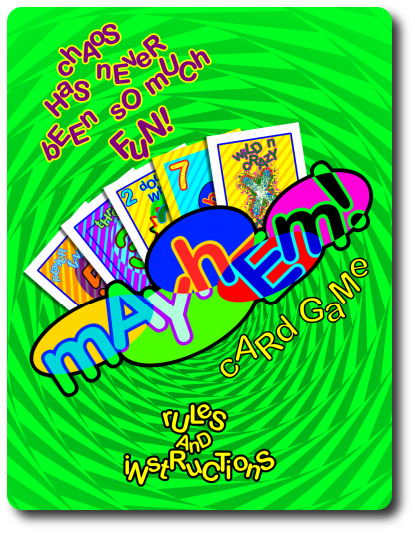 “Fast and furious” is oftentimes used to describe activities that require quick reflexes and an insanely focused presence of mind. Blink and you’ll fall behind or, worse yet, crash and burn. It’s this mayhem that gives many a rush, as the thrill of winning far outweighs their fears of failure. In this game, failure won’t cost you an arm or a leg, but you’ll most likely beat yourself up for mentally not being fast enough to play a single card to the table.

Mayhem!, designed by Jon Moorman and published by Time Flies Games via the Game Crafter, is comprised of 12 “Just Me” Player Number cards, 30 Pick ‘EM cards, and 66 Actin’ Up cards. All the cards are colorful and contain minimal text. Each card is the same size as your standard playing card and just as durable.

To set up the game, first separate each of the 3 card types into different decks. Each card type has a different card back color.

Third, shuffle the Pick ‘Em deck and place it face-down to one side of the “Just Me” Player Number card row.

Fourth, shuffle the Actin’ Up deck and deal to each player 5 cards, face-down. Players should look at their cards, but keep them hidden from their opponents until played. Place the remaining deck face-down to the other side of the “Just Me” Player Number card row. When completed, your playing area might look like the following. 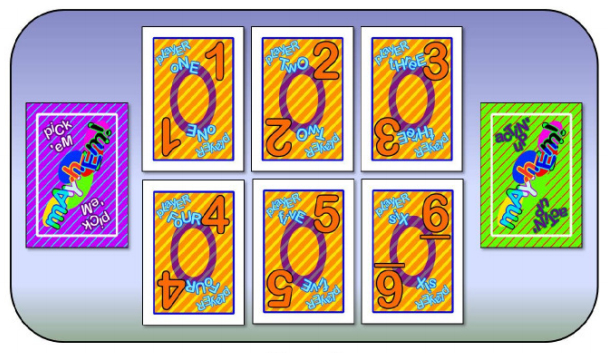 Example of a 6-player game set up

That’s it for game set up. Let’s get crazy.

Mayhem! is played in turns with no set number of turns per round. The turn order will shift constantly during the game. A typical game turn is summarized here.

If it’s the player’s turn, they will draw the top-most card from the Pick ‘Em deck. Each Pick ‘Em card will have a number value and an arrow. The Pick ‘Em card is placed so that the arrow is pointing to one of the “Just Me” Player Number cards in the middle of the game playing area. The player who owns that number is referred to as the “Chosen Player”. The player placing the Pick ‘Em card cannot select themselves. 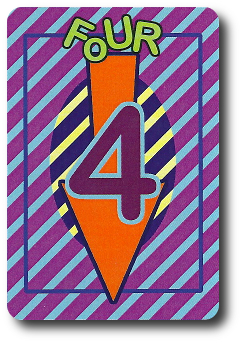 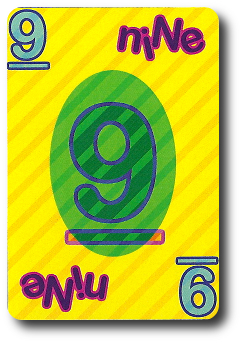 Note all Actin’ Up cards just have numbers. Some are considered “special cards” and have additional effects when played. 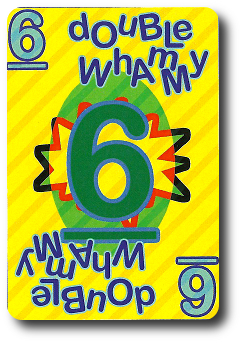 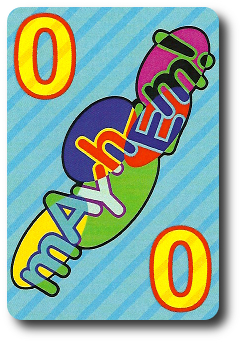 To learn more about Mayhem!, visit the game’s web page.

Mayhem! sounds a lot like UNO to me, which isn’t bad, but does immediately have me cringing. I’m fairly certain the gaming elitists will not care for Mayhem!, but to be fair, I don’t think they’d enjoy it even if it wasn’t like UNO. The game itself is primarily focused on simply playing cards faster than your opponents. What cards you can play is dependent on what cards were played before yours. This means you cannot strategize or use tactics to get the upper hand (pardon the pun). For the Parent and Child Geeks, I don’t think we’ll see any problems with one exception. If the Child Geeks feel like the game is moving too fast, they’ll vote Mayhem! down very quickly.

Teaching Mayhem! is not as easy as it might sound. The card special effects tripped up our players right from the start. Honestly, I think the players were thinking too hard about the game. I don’t consider Mayhem! a complicated or even deep game, but it is played very quickly. Do take the time to go over each of the Actin’ Up special card effects, spend the majority of your focus describing how players should go about placing cards when Mayhem has been played. You should also make sure that players know that the numbers “wrap”. For example, a player cold place an “8” or a “0” if the Pick ‘Em card’s value is a “9”.

Note that the Mayhem! does not require its players to read, but players must be able to recognize small numbers and quickly determine number values in order to play the game.

After teaching Mayhem! to my family, I asked them their thoughts on the game so far.

“I think the special effects will trip me up, but I understand how the game is played.” ~ My Mom

I encourage your players to NOT worry about the special effects. The owner of the game should be familiar with all the special effects and can help resolve them at the end of the turn. The primary focus for all players should only be about playing cards because the entire goal is getting ride of everything in your hand. Let’s play Mayhem! and see if it’s crazy fun or just plain crazy.

Mayhem! was a mixed back almost from the start with our Child Geeks. The level of enjoyment an individual Child Geek had appeared to be based on two important aspects. The first was the Child Geek’s overall level of confidence in their hand of cards. Specifically, knowing which cards they had and when to play them. The second was the Child Geek’s natural speed and ability to quickly scan the table, select a card, and slap it down. It should be noted that NONE of the Child Geeks played cards based on their special effects. They only focused on the number values, which is exactly the right thing to do. According to one Child Geek who really enjoyed the game, “I like it because you can quickly skunk the other players!” Another Child Geek who did not enjoy the game said, “I don’t like it because it moves too fast.” When the games were over, the vote was fairly split leaving Mayhem! with a mixed endorsement from the Child Geeks.

The Parent Geeks rather enjoyed the game and saw it as a light and casual card game that required them to sit up and pay attention in short bursts. This proved to be just enough to keep them interested and engaged, but not enough to overwhelm them as it did with some of the Child Geeks. Overall, the Parent Geeks found Mayhem! to be a better family game than a game they would want to play with their peers. According to one Parent Geek, “I like this game for three reasons. It’s fast, it’s fun, and it’s a game I can play in less than 30 minutes.” Best of all, the Parent Geeks thought it to be a game that reinforced simple math and quick thinking, which is always a bonus. All the Parent Geeks voted to approve Mayhem! 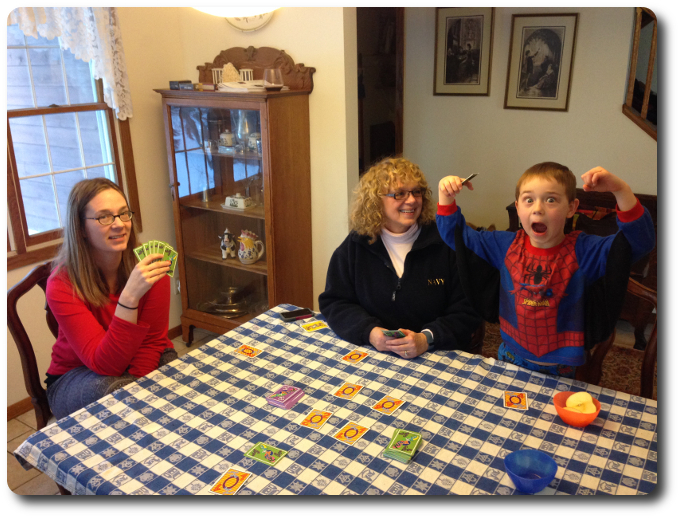 The Gamer Geeks humored me with a single game. They played it like pros, of course, and had no problems with the game whatsoever. When it came time to collect their thoughts, they used words like “unimaginative” and “boring”, but not all of them. One Gamer Geek felt that Mayhem! did a good job of doing exactly what the game designer intended. According to this Gamer Geek, “This isn’t meant to be a deep or complex game. It’s meant to be fast. It’s the kind of game you take on a camping trip or you throw on the table when you want to play a game with people who are not gamers.” To which all the Gamer Geeks agreed, but it was still rejected by the gaming elitists.

Mayhem! is a fun card game for the family and for “whenever” a card game is a good choice for a mixed group of players. There’s enough to the game to make it fun, but not remarkable. Too often I heard comments about Mayhem! being like UNO (despite it playing nothing like UNO), but never did I hear it was better than UNO. To me, this puts Mayhem! squarely in the alternative game selection shelf. Its ease of game play and almost instant familiarity with players makes it a game that I can get to the table with little effort, but it’s not a game that will hit the table often. If you are looking for fast-paced family card game, Mayhem! is certain to please.