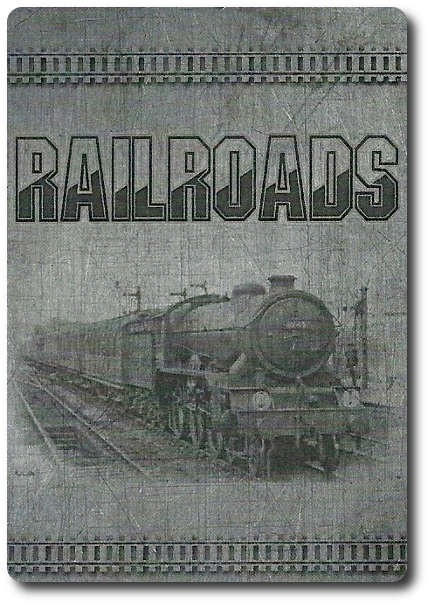 Supply and demand is an easy concept to grasp. If a person wants something, they are willing to pay for it. Being profitable is the real trick. To be successful, you must keep track of trends and anticipate wants and needs. If you do it right, you can make a lot of money. Do it wrong and you can lose everything. In this game, knowing your market is the key to success! All aboard the money train!

Railroads, designed by Chris Leder and published via the Gamer Crafter, is comprised of 8 Station cards, 38 Railroad cards, and 4 Reference cards. The artwork on the cards is nothing more than Photoshop images, but the icons used in the game are meaningful and kept to a minimum. The cards are made of typical cardstock used by most standard playing cards. It’s worth noting that this game was a finalist in the Micro Game Challenge hosted by the Game Crafter and sponsored by All Us Geeks and Father Geek.

To set up the game, fist determine who will be the Dealer. The Dealer should give each player a Player Reference card.

Fourth, the Dealer either takes the top card from the draw deck or the face-up card in the discard pile.

This completes the game set up and the game now begins.

There are only a few card types in Railroads. Knowing how each card type works is essential to having a profitable railroad business.

Consider the following example. The Station card on the left shows the player that they need 2 “Track” Railroad cards and an unspecified type of “Cargo” Railroad card. The player knows that the Station card will award them, at the very least, 2 points. If the player can guess the right cargo that is needed, they could gain many more points than what is listed on the Station card! Once the card is flipped over (as seen on the right), the player will either make a little or a lot of points based on the cargo they sent to the station. 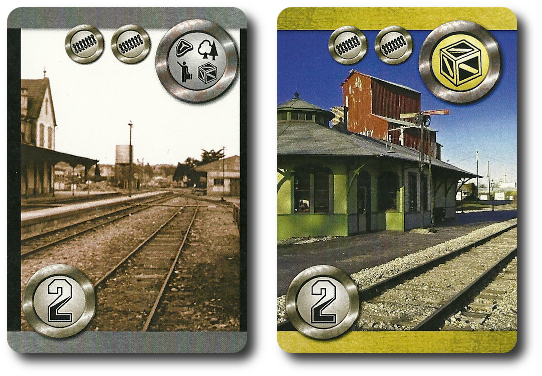 These Railroad card types represent the goods that are being shipped and delivered to the stations. There are 4 different types of cargo. They are “yellow” Crates, “red” Livestock, “green” Timber, and “blue” Passengers. In addition to the cargo icon, the “Cargo” Railroad card will also have a number value. This number value is used when scoring. 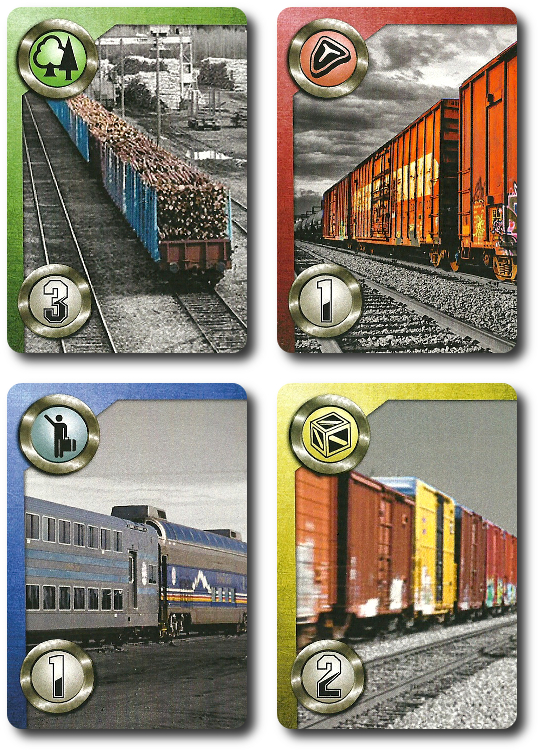 Railroads is played in turns with no set number of turns per game. On a player’s turn, they will complete the following sequential steps.

This step is optional.

A “train” consists of the following cards:

A player is always welcome to add more cards than the minimum required, but they cannot play any more than 6 cards in total.

For example, the player wants to score the top most Station card. It lists 2 track icons. The player places the following cards down in front of them.

The player now passes one card, of their choice, to the next player in turn order sequence. Note that a player must ALWAYS pass a card, which means they cannot play all 7 of their cards during step 2 of their turn!

The last action the player takes on their turn is discarding their hand down to at least 5 cards. The player is welcome to discard all their cards, if they like, but their final hand total cannot be anymore than 5 cards in total. Keep in mind that the order in which the cards are discarded is important as the player’s opponents can draw cards from the discard pile!

Ending and Scoring the Game

The game ends as soon as the last Station card has been scored. All the players should now go through their Score piles and add up the number values noted on their Station and matching “Cargo” Railroad cards. The player with the most points wins the game!

To learn more about Railroads, visit the game’s web page on the Game Crafter.

This is a very easy game to learn how to play, but it’s essential that all players understand four important points before they begin.

The Gamer Geeks will most likely give Railroads a mixed endorsement at the worst. The game is not that deep, but you must be thoughtful to play it. A player needs to use strategy and tactics, too, but not very complicated ones. Essentially, there is enough of a “game” here to keep a Gamer Geek interested and engaged, but I think only the most casual of Gamer Geeks will enjoy it.

After I taught Railroads to my two oldest Child Geeks, I asked them their thoughts on the card game so far.

“Looks like an easy set collection card game. Should be fun.” ~ Liam (age 9)

Let’s get this game going and see if it’s an enjoyable journey or a very bumpy ride.

The older Child Geeks and those Child Geeks who played a lot of card games, did very well with Railroads. It took them a few games to really get the hang of keeping track of what Station cards were scored, but they always demonstrated a clear understanding of how the cards worked together. As predicted, the game frustrated the younger Child Geeks. It was not uncommon for a Child Geek to think they knew EXACTLY what the Station card needed, only to be very disappointed when they revealed it. The first couple of times this happened to a Child Geek, everyone laughed it off. It became less funny and fun the more times it happened. Railroads is one of those games that actually becomes easier to play as the game progresses, but harder to score points as a result. This created more grimaces than smiles at times. According to one Child Geek, “I like how the game is played, but I hate not knowing if my cargo is going to be taken by the station.” Vote wise, the Child Geeks were split fairly evenly. The more mature and older Child Geeks very much enjoyed Railroads, while the younger and less experienced Child Geeks did not. However, since the younger Child Geeks were younger than the listed minimum age for the game, their vote of disapproval was not included in the final tally. This resulted in Railroads getting the Child Geek vote of approval. 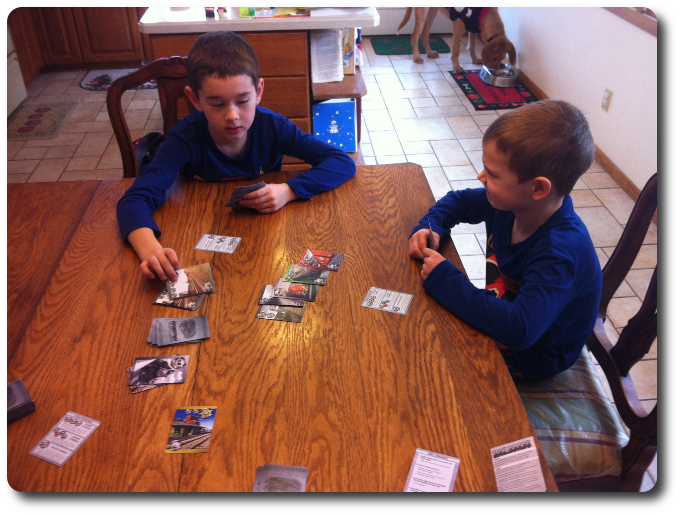 My oldest flips over the Station card as his younger brother looks on, ready to claim victory!

The Parent Geeks adored Railroads and enjoyed playing it with their family and peers in equal measure. They found the game to be casual, fun, and engaging with just the right amount of thought behind every play to keep things interesting. According to one Parent Geek, ‘This is the best train card game I have ever played.” Another Parent Geek, who loves Ticket to Ride, said “This game does a great job of capturing the fun part of train games without watering it down.” None of the Parent Geeks had anything negative to say about the game and eagerly gave it their vote of approval.

The casual Gamer Geeks enjoyed Railroads and all gave it their collective thumbs up. According to one Gamer Geek, “This is one of those card games that is deceptively simple. You really have to watch your cards to score enough points to win.” This was also a bit of a negative according to a few Gamer Geeks. One Gamer Geek who thought so said, “This game can run away from you making it impossible to catch up to a player who either guessed right or was simply lucky. I don’t like games that you can’t work hard to win if you fall behind.” A good point, but the majority of the Gamer Geeks found that the point spread was pretty even. The more hardcore Gamer Geeks voted to reject Railroads because they found it to be too basic and too much luck in the first couple of hands. According to one of the elitists, “A good card game, and one I’d play if in the right mood, but I don’t like how cornered a player gets without any opportunity to make use of meaningful tactics and strategies to get the upper hand.” In the end, the Gamer Geeks were split.

I very much enjoyed Railroads and think that Mr. Leder has done a great job of creating a fun and casual train card game. I enjoy Train games, in general, and Railroads has captured enough of what I enjoy about them to make every game playing session a very satisfying experience. Do sit down and play Railroads when the opportunity presents itself. A great game for family, friends, and aspiring railroad barons!