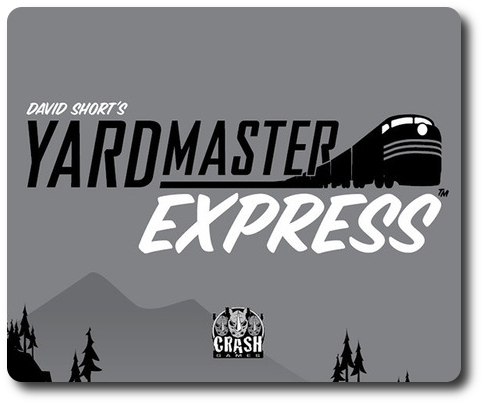 Anyone who has worked on the railroad will tell you that it’s not how long your train is, but what you are hauling that counts. In this game, players will be making a train of the same length, but it’s how the railcars are coupled that will make the difference. The player who can build a train on the line that has the most of a common good will become the master of the rails!

Yardmaster Express, designed by David Short and published by Crash Games, is comprised of 32 Railcar cards, 5 Engine cards, 4 Caboose cards (an included game expansion), and 1 Starting Player token (that is a meeple sized locomotive). The cards are square with rounded edges and are as durable as your standard playing card. The meeple locomotive is made of wood and you cannot have it. It’s awesome. Artists Darrell Louder and Dan Thompson give Yardmaster Express a clean and colorful look.

To set up the game, first deal 1 Engine card to each player. Players place their Engine card so it’s in front of them and slightly to their left (or right). Place any Engine cards not used back in the game box. 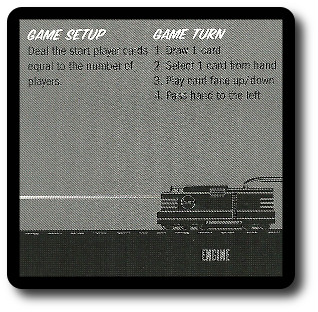 Second, find and place the Caboose cards to one side of the game playing area. You won’t play with these unless you want to use the expansion (see “Game Variants” below).

Third, if playing with only 2 players, find and remove any Railcar card that have the purple Automobile cargo on it (should be a total of 8 cards). Removed Railcar cards go back in the game box. Regardless if cards were removed of or not, organize the Railcar cards so all the colored sides are facing the same way and then shuffle the deck.

Fifth, place the rest of the Railcar cards in the middle of the playing area, colored side face-down. This is the Railcar draw deck for the duration of the game.

That’s it for game set up. Time to get cracking on the track!

Yardmaster Express is played in rounds and turns with a set number of round in a single game. It’s also played very quickly, but not so fast as to suggest a player doesn’t have the time to think about what they want to do on their turn. On a player’s turn, they will complete a small number of sequential steps beginning with the Starting Player and continuing clockwise.

The player draws the top-most card from the Railcar draw deck and adds it to their hand of cards.

The Railcar cards are double-sided. One side has colors and represents two specific types of cargo cars (automobiles and coal, for example). The cargo is actually unimportant and is only there for thematic reasons. What is important are the colors and numbers. The other side of the Railcar is colorless (actually, it’s “grey”) and each cargo car is referred to as a “Wild car”. Given these two sides and the cards the player has in their hand, they must now make a choice.

But recall that each Railcar card also has a wild side. The “Wild Car” side can be used and can connect to any other Railcar card since it does not have any specific color.

The left Railcar card was attached to the train.The “Wild Car” can attach to it regardless of color or number value.

After placing 1 Railcar card, the player takes the rest of the cards in their hand and passes them to the opponent on their left (the next player in turn order sequence).

This completest the player’s turn. The next player in turn order sequence now goes starting with step 1 noted above. When the turn order comes back to the Starting Player, a single round of game play has been completed.

Arriving at the Station

At the conclusion of the final round, all players count their points.

First, add the number values on all the Railcar cards attached to the player’s Engine card. This is the player’s Train score.

Second, determine which cargo type has the longest cargo run in each player’s train. This is done by counting the total number of cargo cars that are adjacent to each other that share the same color value without another cargo car color breaking adjacency. Whatever cargo car has the longest run (be it 1 or more) will count as the player’s Longest Cargo Run value. The player with the Longest Cargo Run is given 1 point per cargo car in their run as bonus points. Players who tie get the bonus points and do not have to share them. “Wild Car” Railcar card sides are not counted.

If this player had the longest cargo run, they would receive four bonus points

The Train and Longest Cargo Run scores are now added together. The player with the most points wins the game.

Several game variants are offered to those who want to play the game with a twist. Each is summarized here.

During game set up, deal 1 Railcar card to each player. When it’s a player’s turn, they draw a new card at the END of their turn before passing instead of at the beginning.

The Child Geeks enjoyed themselves, finding Yardmaster Express to be more of an exercise in “picking what is useful now” instead of “what do I need to get later”. In fact, none of the Child Geeks felt like they could make any real choices other than the immediate concern to pick the best card at the moment. According to one Child Geek, “I know what cards might come back to me, but I cannot depend on that to happen. All I can do is pick the best card now and hope a better card is available when the cards come back to me.” Another Child Geek said, “I like how fast the game is and how easy it is to pick and play cards.” The “Wild Car” Railcar card was used a great deal and intelligently so. The Child Geeks only used it when they found no other solution. But the fact that they always had ways to score points filled them with ease and helped them have fun. When all the games were over, the Child Geeks approved Yardmaster Express. 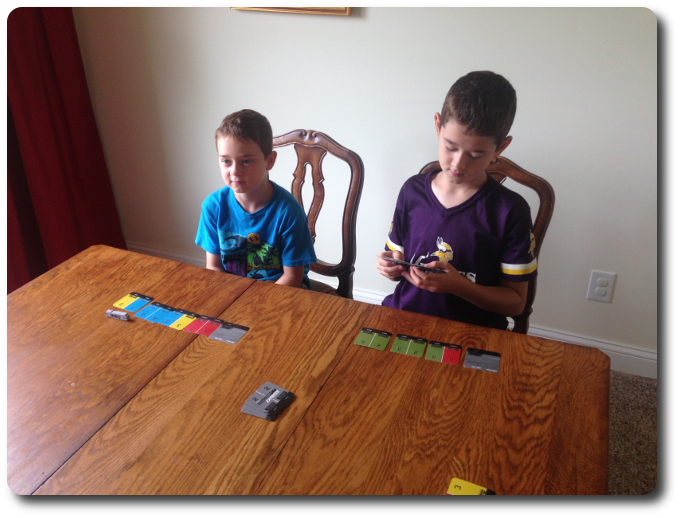 Downtime between turns was filled with conversation, jokes, and getting food

The Parent Geeks also enjoyed the game. The casual and non-gamers were delighted with how the game was played and again remarked how much they enjoyed games with card drafting rules that make each turn unique (see Sushi Go! for another example of such a game). According to one Parent Geek, “This is a light game that is easy to learn and quick to play. I would play this again with friends and family without question.” The game was found to be particularly good in noisy rooms and with kids running around, since the game itself only requires the player to fully concentrate on their turn. This made Yardmaster Express feel like a very casual game, but not one that could be taken lightly. If players didn’t pay attention on their turn, they could be left hurting. As one Parent Geek put it, “You have a lot to choose from, but only a few really good choices to consider. The challenge is creating the Longest Cargo Run, since everyone makes points during their turn.” When all the games were over, the Parent Geeks voted to approve Yardmaster Express.

The Gamer Geeks didn’t find anything particularly wrong with the game, but were not that impressed with it either. According to one Gamer Geek, “I like how the game plays, but not how it scores. Everyone makes points every round, which makes me feel that making any points at all is really not that exciting.” Another Gamer Geek said, “A solid game, but it lacks a certain sense of risk and challenge. I never felt like I could do anything other than pick the best card at the moment and then just pass the cards again. It started to feel like a game of hot potato.” And finally another Gamer Geek said, “For a game that has zero strategy, is very random, and completely luck based, I can’t say I hate it. I just don’t much care for it.” In the end, the Gamer Geeks felt like Yardmaster Express just didn’t have enough depth to be of any interest. They gave it full marks as a game they would possibly consider as a filler, but not necessarily one they would request to play.

I sympathize with the Gamer Geeks concerning this game. There really isn’t much to Yardmaster Express in the way of strategy or tactics. Every turn is the same with the only exception being the cards you get to select from. That can get pretty uninteresting for a player who likes a challenge and the need to consider multiple routes to victory using critical and tactical thinking. But that’s where my sympathy ends. I found Yardmaster Express to be a great casual game that I can play just about anywhere and with anyone. Perfect for those times when I’m drinking coffee with other parents, I have a mixed group of players who want to play a game, or whenever I just want a quick game to kill some time. Yardmaster Express is perfect for this.

If you like casual card games and trains, where the choices you make may or may not come back and haunt you, and there is always a way to score a few points, then do take a look at Yardmaster Express. It might not challenge you, but it will certainly entertain you.