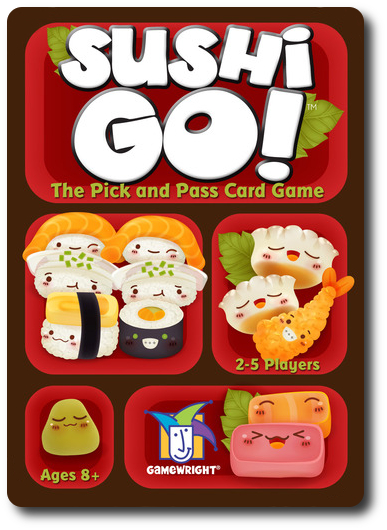 Sushi has been referred to as “art” and “dead uncooked fish on rice”. It’s both, if the truth be told. Some visibly turn green when asked if they would like a bite and others just cannot eat enough. Regardless of which extreme you tend to lean towards, sushi is best in moderation. Pick your pieces with thoughtful consideration and take the time to enjoy each bite. Then, devour the pudding!

Sushi Go!, designed by Phil Walker-Harding and published by Gamewright, is comprised of 108 cards. The cards depict all things sushi. This includes, but is not limited to Tempura, Sashimi, Maki rolls, and several different versions of Nigiri. Chopsticks, dumplings, wasabi, and pudding are also depicted. The cards are as durable as your standard playing cards and very colorful. The illustration by Nan Rangsima are outstanding and make the game a pleasure to look at. Not included with the game, but necessary to play, is a pen or pencil and something to write on to keep track of players’ scores.

Getting Ready to Eat

To set up the game, first shuffle all the cards.

Second, deal out cards to the players, face-down. The number of cards dealt is dependent on the number of players in the game.

Third, place the remaining cards face-down in the middle of the playing area. You’ll use these later in the game.

That’s it for game set up. Time to eat!

There are two special cards that need to be explained a bit in detail before the game is played. 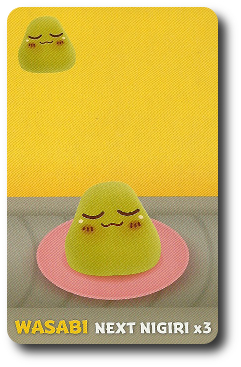 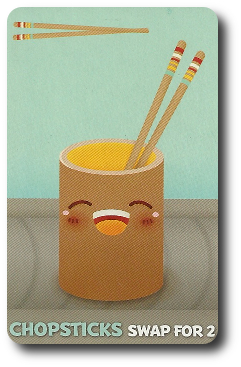 The Art of Eating Sushi

Sushi Go! is played in rounds and turns. Each game will consists of 3 rounds in total. A round of play is summarized here.

End of the Round Scoring

After the last card has been played and revealed, it’s time to calculate the score. 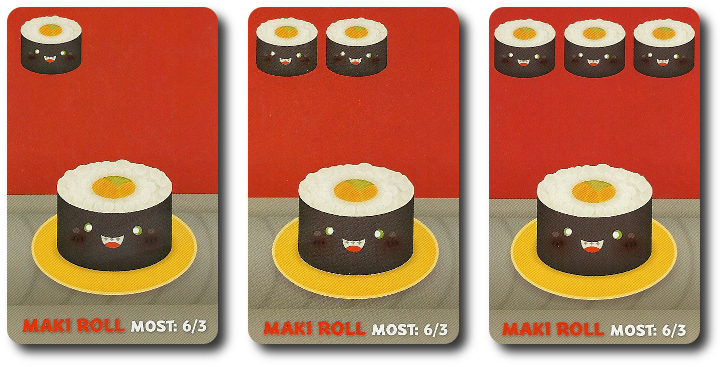 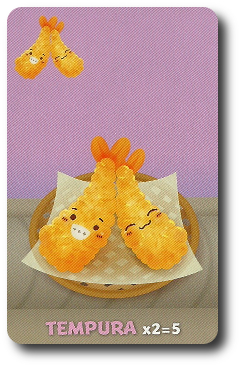 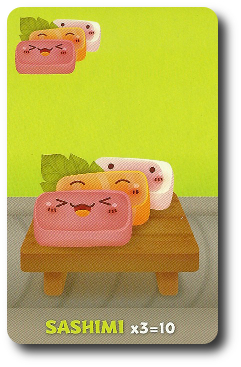 The player’s aren’t done yet! It’s time to get to the dumplings! Players now group their Dumpling cards and count the total number of Dumpling cards they have collected. Points are awarded as follows:

Now those are some tasty dumplings! 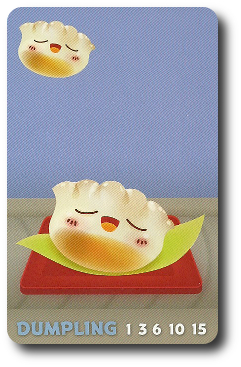 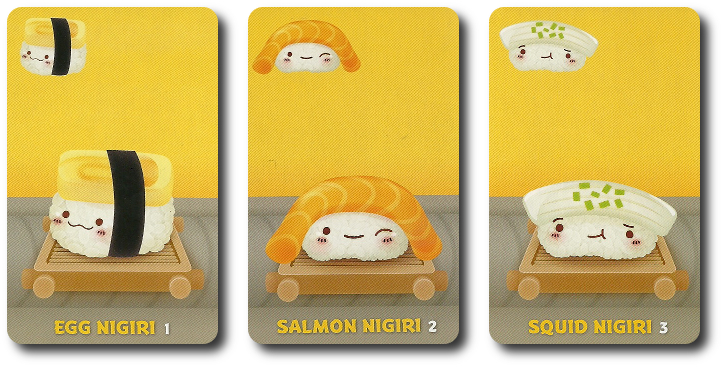 Note that a Wasabi card not paired with a Nigiri Roll card is worth zero points.

Pudding cards are not scored during the round, but they will be scored at the end of the game. Chopsticks cards, if the player has any, are worth zero points.

All played cards are now collected, except the Pudding cards, and discarded. Pudding cards remain in front of the player for the entire game and are only counted when the third and final round is completed. Players are now dealt a new hand to start the next round.

End of the Game Scoring 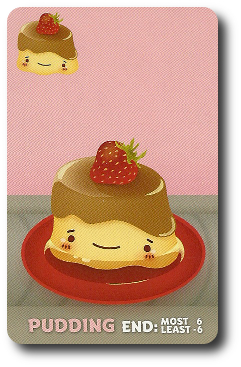 The puddin’ points (as I like to call them) are then added to the score. The player with the most points wins the game.

Sushi Go! comes with two game variants you can choose to use or completely ignore.

Sushi Go! is normally played with a minimum of 3 players. This game variant allows 2 players to enjoy the card game when a third friend is nowhere to be found. In summary, a “dummy hand” is created and players take turns playing the dummy hand to the table. The catch here is that a player gets to play 2 cards on their turn (1 for themselves and 1 for the dummy player), but they get to draw 1 card from the dummy hand before they make their choice. Control of the dummy hand changes every turn during the round. Other than the use of the dummy hand, the game is played as described above. It’s perfectly possible that the dummy player scores more points than a real player. Which, as you can imagine, really makes the ego sting.

The Child Geeks, even the younger ones, immediately understood how to play Sushi Go! According to one Child Geek, “This is just a set collecting game. I can totally play this!” And play it they did, but not as well as they should. I observed several cases where Child Geeks either forgot what cards they had seen or simply didn’t care and just collected the cards they wanted. Which, in one Child Geek’s case, was absolutely true. According to this Child Geek completest, “I think it’s fun to get a whole meal before the round is over.” A worthy goal, but not one that brings victory. Only the older Child Geeks were visibly making thoughtful choices, taking their time, and clearly had a plan. Unfortunately, looking at their younger opponents’ played cards provided little information to suggest what they should or should not play. One older Child Geek said it best when he mumbled, “It’s impossible to tell what my younger brother is thinking.” All the Child Geeks voted to approve Sushi Go!, finding it to be a fun game to play and a joy to look at. 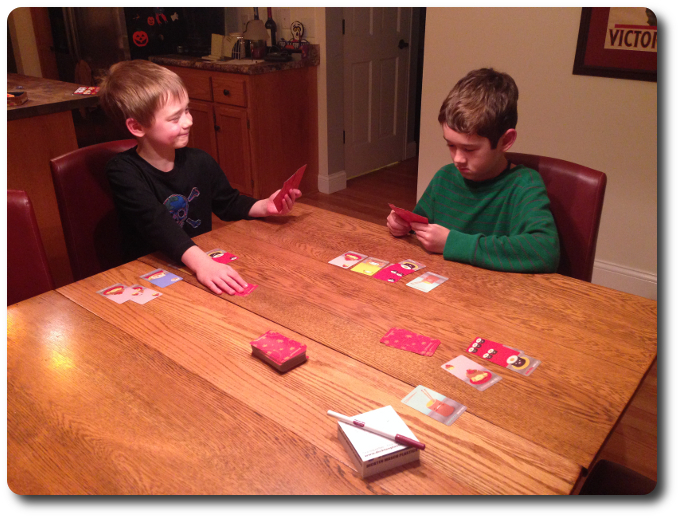 The Parent Geeks, both non-gamers and casual gamers, adored Sushi Go! One Parent Geek said, “What I like best about this game is how easy it is to teach and to play. I can enjoy the game with my kids and my adult friends all at the same time.” Indeed! Sushi Go! proved to be a game that challenged all its players, but never excluded anyone based on age or skill. Another Parent Geek said, “What I like is how fast the game plays. I have played other games like this that take too long to explain and play. I can play this game while I’m waiting for the pizza to bake with time to spare.” Finally, another Parent Geek said, “Good game. Simple and fun. A good game to bring to the table whenever a game is requested.” All the Parent Geeks voted to approved Sushi Go!

The Gamer Geeks were very familiar with the game’s mechanics and quickly jumped in. The first round took less than 5 minutes, the second took about 6, and the last round took about 5 minutes. When the first game was over, a second was immediately started followed by a third. After several games, the Gamer Geeks quietly reflected. One Gamer Geek said, “I think this is a solid game, would make for an excellent game filler or starting game, and should be played more often. I give it my thumbs up.” Another Gamer Geek said, “A good game with solid game play, but I found it to be too light for me. I want a meatier game with more to think about.” Another gamer Geek chimed in saying, “I don’t think this is a game I would want to play every night, but I would play it again and most certainly with family and friends who are not gamers.” Finally, one unimpressed Gamer Geek said, “All I did was pick cards each round and count scores. That’s not fun or interesting.” When all the votes were counted, the Gamer Geeks gave Sushi Go! a mixed endorsement. The more hardcore Gamer Geeks disliked the game and the more casual Gamer Geeks loved it. Everyone agreed that the Pudding card was adorable.

I’ve heard it said that Sushi Go! is like a watered or stripped down version of 7 Wonders. I cannot disagree with this comparison. Sushi Go! and 7 Wonders share the same game mechanics, such as simultaneous card selection, card drafting, and set collecting. But that’s where I think the similarities end. If an individual wanted to teach younger players how to play 7 Wonders, introducing and playing Sushi Go! would be an excellent first step. Much in the same way that one must learn how to crawl before they run. But knowing how to play Sushi Go! does not mean a player knows how to play 7 Wonders. They are two different games.

As for me, I really liked the game. It’s light enough to be enjoyed without much fuss and quick enough to keep everyone engaged without taxing a player’s interest. Best of all, the game play isn’t fluff. Competitive players will have to think and remember which cards they have seen and match that to the cards they see on the table. Not that you need to do that in order to play, but the door is open to those who want to take Sushi Go! to a deeper level.

My biggest hope for Sushi Go!, oddly enough, is to play it enough times so my Child Geeks are no longer interested in it. I want to expand their game playing experience by introducing the “next level” of card games that Sushi Go! perfectly prepares them for. Specifically, 7 Wonders and Lost Legends. Sushi Go! introduces and uses the core game mechanisms of these more complicated games beautifully. To a point where I would gladly sit down and play Sushi Go! with anyone because it delivers a solid game playing experience. Not as robust and deep as I would like, but I have yet to walk away from a single game not feeling happy. Do try this adorable card game. I think you’ll find it to be worth your while.

Finally, and in hopes of showing you just how strange and wonderful the interweb can be, I want to share this video with you. When you are dong watching it, you will know why pudding is worth getting excited about.