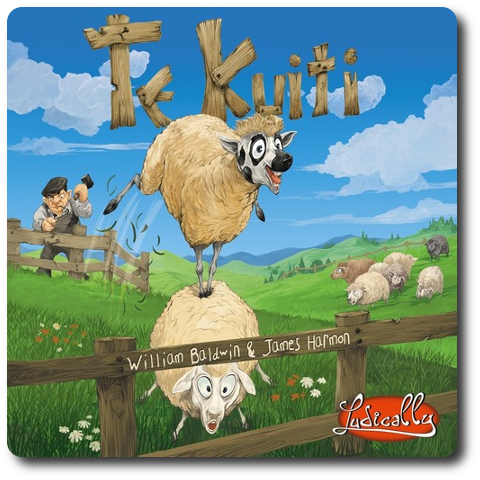 Te Kuiti, New Zealand is the self-proclaimed “Sheep Shearing Capital of the World”. With more sheep than people, it takes a lot of energy to make sure animals stay where they should. Miles and miles of fences stretch to keep the sheep safe and secure. Sheep, however, are not big on fences…

Te Kuiti, designed by William Baldwin, Jim Harmon, and published by Ludically, is comprised of 25 Sheep tiles and 30 wood Fence pieces. The tiles are thick and sturdy and the wooden fences are thick enough to not snap easily. Not that you’d want to try. Vincent Baulanger provided the illustrations of the sheep that range from a raging ram to what I am pretty sure is a docile sheep high on marijuana. The following image is an example of all the Sheep tiles that are to be collected in the game. You tell me which one looks a little “dazed and confused”. 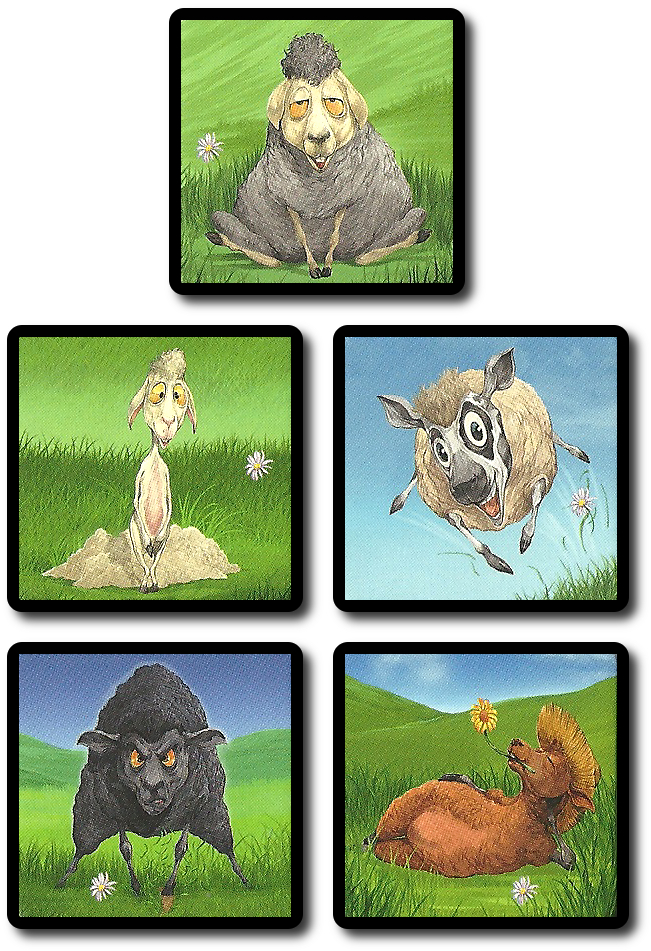 Now that I think about it, all the Sheep look a little “off”…

Note: Te Kuiti can be played with 2 players or 1 player. The solitaire game variant is described the “Game Variant” section of this review.

To set up the game, first separate the Sheep tiles from the Fence pieces.

Second, place all the Sheep tiles face-down (sheep are not visible) and shuffle them about.

Third, arrange the face-down Sheep tiles to form a 5 x 5 square grid making sure to leave enough room between each Sheep tile for 1 Fence piece. This area is referred to as “the field”.

That’s it for game set up. Time to fence those sheep in!

Te Kuiti is played in rounds and turns. There are a total of 2 rounds per game. Actions available to the player are dependent on their current role in the round. The first player of every round is always the Shepherd.

The Shepherd’s job is to keep the sheep secure by enclosing them with the Fence pieces. This is done by building fences around the Sheep tiles. 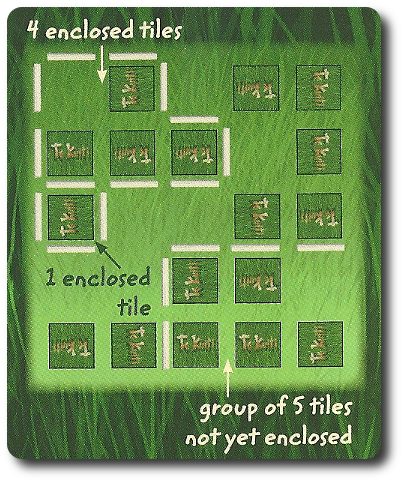 After the Shepherd has taken their turn, the Sheep player takes theirs. Two tiles are flipped over that are NOT enclosed in a fence. All Sheep tiles enclosed by a fence now belong to the Shepherd player. Depending on the results of the two flipped Sheep tiles, the following will occur.

The Shepherd player scores 1 point for every Sheep tile they have enclosed in their fence line, revealed or not.

After the second round ends and points are scored, the points earned during the first and second round are added together. The player with the most points wins the game.

Te Kuiti can be played as a solitaire game if another player is nowhere around. When playing solo, the goal is to remove all the Sheep tiles before they are enclosed by Fence pieces. Game set up is the same as a 2-player game, but the game play is not. The player reveals 1 Sheep tile at a time until they have a match. Whenever a Sheep tile is revealed that has a white flower, a Fence piece is added on the side of the Sheep tile where the white flower is located. 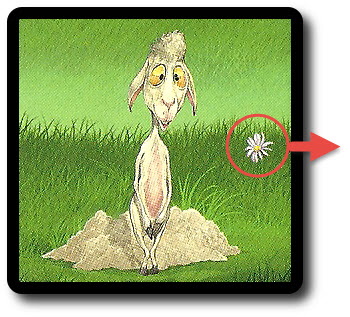 To learn more about Te Kuiti, visit the publisher’s website.

The Child Geeks enjoyed the game, but only the youngest of the Child Geeks kept playing it. The older Child Geeks have long since surpassed the basic game play Te Kuiti provides, finding it to entertaining for a few games and then rather boring. According to one older Child Geek, “This is the kind of game I would have loved to have played when I was a kid.” He’s 11-years-old. A younger Child Geek said, “I like this game! It’s like a memory-battle-race game!” In a way, yes, it is. The Child Geeks also liked that the roles of the game switched, giving both players a chance to flex their memory and area control muscles in a single session. When all the votes were over, the Child Geeks all agreed that Te Kuiti was a game they enjoyed playing. 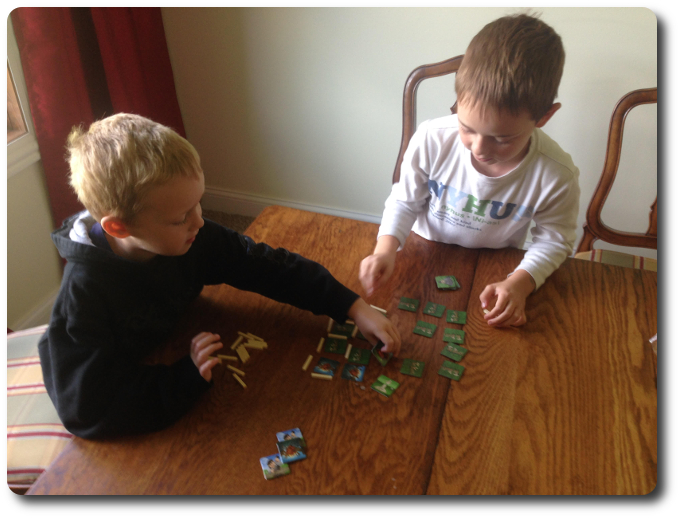 The Parent Geeks didn’t care for the game when they just played it with their peers. While Memory games are just as demanding for adults as they are for children, Parent Geeks have long since learned tricks to help them memorize things quickly and have a more disciplined mind. This made the memorization portion of the game pretty easy, but the area control portion was just as challenging for the Parent Geeks as it was for the Child Geeks. According to one Parent Geek, “I rock as the sheep, but have a really hard time as the shepherd.” Another Parent Geek said, “This is an interesting game. One part memory and one part boxing. I like it. It feels like a fresh new take on two old games.” While Te Kuiti scored little points with the Parent Geeks among their peers, it earned their admiration when playing the game with their Child Geeks. All the Parent Geeks agreed that Te Kuiti was a game great for the family and kids, but wasn’t a great game for just adults. They all voted to approve Te Kuiti.

The Gamer Geeks were not impressed with the game. One Gamer Geek said, “This is just a mash-up of two different games. Alone, they were bad. Together, they are still bad.” Another Gamer Geek said, “This is obviously a kids game. There is no way a serious gamer would sit down and play this with another serious gamer unless they had absolutely nothing else to do.” Despite their dislike for the game, all the Gamer Geeks agreed that there was nothing technically wrong with it. It provided enough of a challenge and had a high enough level of engagement to make it worth while, but not nearly enough to make it of any interest to the gaming elitists. The Gamer Geeks rejected Te Kuiti.

Te Kuiti is two games in one. Specifically, Memory and Boxes (we reviewed a nice all-wood version), with a few player abilities thrown in. Overall, not very exciting to a gaming elitist and borderline boring for an adult, as our groups reported and we observed. The game is targeted towards younger players and on that mark, it hit the bullseye. Te Kuiti is a great game for the Child Geeks, but the amount of time they will spend on it will greatly depend on their overall gaming experience. For example, my youngest Child Geek is still working through his first games and he enjoyed Te Kuiti a great deal, as did his older brother. The oldest of 3 brothers, who comfortably plays games like Cthulhu Wars, played one game of Te Kuiti and said he was bored. It will also come down to temperament. Memory games can be frustrating for some, especially Te Kuiti, since the available Sheep tiles quickly begins to dwindle thanks to the Shepherd’s fences, adding a new level of stress and possibly frustration.

But this is exactly why I like the game. Not as a Gamer Geek or a Parent Geek, but just as a “gamer”. I like the idea that a player has to quickly find matches while at the same time feeling pressured to work as fast as possible. You cannot randomly guess or you will lose. Instead, the additional pressure to perform due to the growing number of Fence pieces helps you focus, sharpen your concentration, and challenges you to work as efficiently as possible.

In contrast, the Shepherd player has a much easier job, but not a simpler one. The Shepherd player can really blow it if they don’t put some critical thinking into their Fence piece placement. They need to watch what Sheep tiles are shown and start working immediately on making it difficult for the Sheep player by reducing their options.

I am most pleased with Te Kuiti. I think it does a great job for whom it was intended for. This is not a game designed for adults or elitist gamers. This is a game designed for a very special audience of young gamers who want to play games that are both fun and challenging. Te Kuiti is a game I can see my youngest Child Geek playing for some time and will be the game responsible for his success in the many more complicated games to be played in the future. If you have a Child Geek who likes to play games or you want to introduce games to a Child Geek, do take a serious look at Te Kuiti.