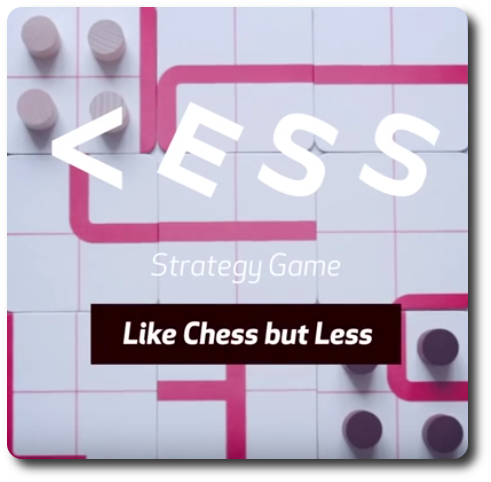 The decisions we make in our lives are always based on immediate or future concerns. Should I turn left or right to get to the store? Should I save 25% of my paycheck for retirement or only 20%? Life is full of forks in the road. In this game, players must constantly make decisions on how best to move forward, while at the same time deciding their next 2 to 10 moves in the future.

Less, designed by Aleksandr Starovojtov and to be published by Invented 4, will reportedly be comprised of 12 Board tiles and 8 Player pieces (4 white and 4 black). The Board tiles will be as thick as a your typical beverage coaster, suggesting it will be thick and very durable. I know ours were. The Player pieces will be made of wood, but the colors of the pieces we were provided were more like “dark brown” and “tan”, instead of “black” and “white”. Being an abstract game, it should come as no surprise that the art direction for Less is exceedingly minimal, favoring clean lines and good use of space, rather than vibrant colors and expressive imagery.

Note: The following game set up is for 2 players, but up to 4 players can play Less. The 4-player game variant is summarized in the “Game Variant” section below.

To set up the game, first shuffle the Board cards and deal out the first 9 to form a 3×3 square grid. The Board cards should be dealt face-up, but not rotated when placed to the table. Any Board cards not used are returned to the game box.

Second, give one player the black Player pieces and the other player the white Player pieces. Each player now places their pieces on opposite corners of the grid, occupying the 4 square spaces on each Board card. This area is referred to as the player’s “Base”. 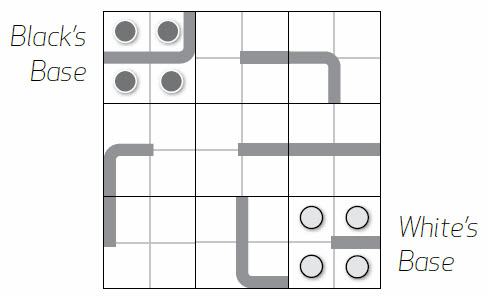 That’s it for game set up. Determine who will go first (normally the person controlling the white Player pieces) and begin.

Less is played in turns with no set number of turns per game. Each player has 3 movement points on their turn. A player can spend their movement points among their 4 pieces however they choose.

Possible moves include the following: 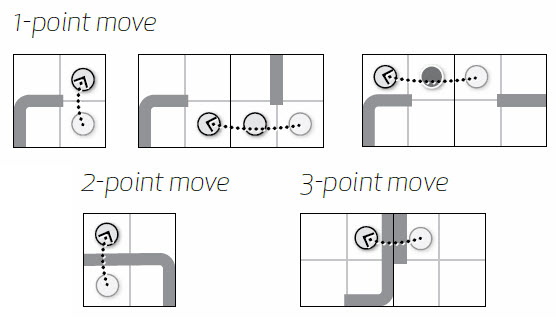 After the player spends their 3 movement points, the next player takes their turn. This continues until the game is won.

If only playing 1 game, the first player to get all their pieces to their opponent’s Base wins the game. Since a single game is played very quickly, players can keep track of the points earned over a course of 2 or more games, resetting the game by dealing out a new 3×3 square grid at the start of a new game. The player with the most points after the games are over is the winner.

Less can also be played with 4 players if two copies of the game are put together. Instead of a 3×3 square grid, a 4×4 square grid is created. Players work together as a team based on their piece color. The players controlling the black Player pieces will place their pieces in adjacent corners of the grid on the same side, while their opponents will do the same on the opposite side of the grid. The first team alternates moves with the second team (white, then black, then white, etc.). If a team member has moved their 4 pieces into their opponent’s Base, their teammate can use their moves during their turn.

To learn more about Less, visit the game publisher’s website or visit the Kickstarter campaign.

The Child Geeks had zero issues learning how to play the game and jumped right in. Less is not a very complex game to teach or to grasp, making it an easy sell to the Child Geeks who oftentimes stay away from games with lots of rules. According to one Child Geek, “I really like this game. It’s easy to understand and a lot of fun to play. I especially like how the board keeps changing.” Another Child Geek said, “The hardest part about this game is not letting your opponent’s progress get to you. You just need to keep your head down, focus, and do your best.” The Child Geeks really enjoyed themselves and always shook their little fists in frustration when they lost or pumped their fists skyward in jubilation when they won. Less is a game that both challenged and entertained the Child Geeks, which lead them to fully endorse Less. 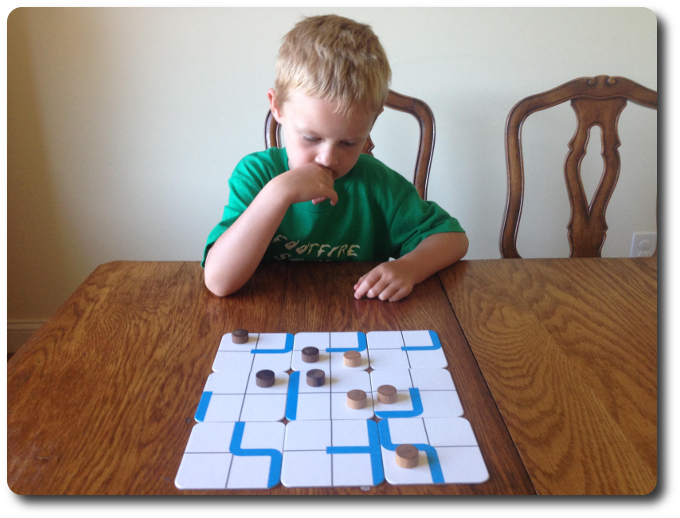 The Parent Geeks also enjoyed the game, finding it to be an excellent exercise in critical thinking and problem solving. According to one Parent Geek, “I think this game is the perfect transition between Checkers and Chess. The player has to think several moves ahead, which is exactly what you want to teach younger gamers to do.” Another Parent Geek said, “I am surprised how much I am enjoying this game. It’s exceedingly simple in its execution, and yet, I find myself thinking much harder about my moves than I would have thought. This is a really fun game.” The Parent Geeks, be they gamers or non-gamers, all found Less to be entertaining and challenging, mixing critical thinking and strategy together to produce a worthwhile experience. All the Parent Geeks approved Less, finding it to be much more than what they originally thought it would be.

The Gamer Geeks appreciated the game for what it was, but that was about it. According to one Gamer Geek, “I have no problem with this game and think it’s a good one. It’s just way too easy for me and doesn’t provide any real challenge. It’s not fun because it doesn’t push me.” Another Gamer Geek said, “This is a great example of a game that is perfect for families and younger or inexperienced gamers. For elitists like me, this game offers nothing.” To be clear, none of the Gamer Geeks found any fault with Less. What they didn’t like was the fact that it didn’t engage or challenge them. In some respects, this is not too surprising, as the game itself is not overly complicated. For the Gamer Geeks, it came down to expectations. A game must challenge and force the Gamer Geeks to rethink their strategies to be worth their time. Less did not. As such, the Gamer Geeks rejected the game.

Less bills itself as “like Chess, but less”. I cannot agree with this statement. Less is nothing like Chess. If anything, Less is like Checkers with walls. Which is not a bad thing, but I don’t want you to be mislead. Chess is a game rich with strategy and tactics, of give and take, ploys and plots. Less has none of this. The object is clear and the players do not engage each other aggressively at anytime. Nothing is captured or removed. Instead, Less is about smart logistical moves, where timing plays second fiddle to positioning. Less is a game about mentally working out how best to logically maximize movement in as few moves as possible.

I found Less to be a game perfect for the Child Geeks and their Parent Geeks who wanted to play with them. And that’s about it. For Chess enthusiasts, Less would disappoint, but for individuals who have played Checkers and want a more challenging game, Less is perfect. Here is a game that always gives the player a new puzzle to solve, but the rules never change. This provides a solid base for new players to learn from and to begin to understand how important thinking several moves ahead is. This is not a game where you react to your opponent. This is a game where players must map out in their head the path they want to take and then rapidly move towards their goal in hopes of beating their opponent to the punch.

But the game’s biggest strength is also its greatest weakness. Less is rather linear. Players must challenge themselves to move as far as possible as fast as possible. And that’s it. An opponent’s piece might block their way or be used to jump over, but nothing else will block their progress. Every game is the same with the only changes being the Board tile placement and the opponent’s piece movement. The game feels static after a few plays, resulting in sequential boredom.

Is that a bad thing? Not in the least, but it does seem to limit the game some. But one must ponder the importance of such limitations, especially when the game takes less than 8 minutes to play. Less is not a game designed to trump Chess or Checkers or meant to be the game you play for hours on end. I find Less to be a game that works well in short bursts, offering aspects of both critical thinking and strategic foresight, resulting in an engaging and entertaining Abstract Strategy game. It’s a nice diversion and worth a few plays. If you are a fan of games where thinking ahead is the goal, then do try Less. What it lacks in bulk, it makes up for in streamlined logistical game play.