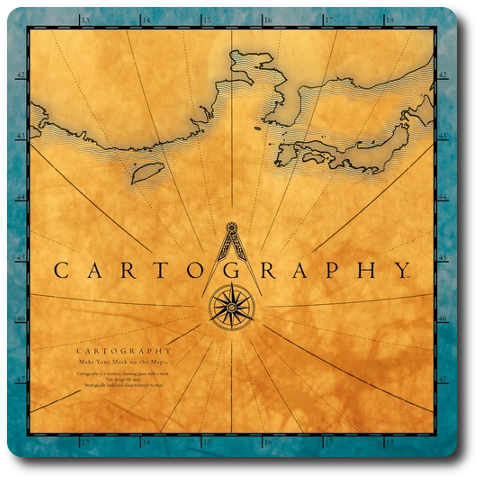 Military strategist and philosopher, Sun Tzu, said “All men can see these tactics whereby I conquer, but what none can see is the strategy out of which victory is evolved.” In this game, very little remains in shadow. This forces players to hide their true intentions in plain sight of their foe. While that is difficult in and of itself, the true challenge lies in knowing when to strike.

Cartography, designed by Jon Adams and published by Playford Games, is comprised of 48 Region tiles and 60 Castle tokens (30 orange, 30 blue). The Region tiles are made of thick cardboard, which are triangular in shape, and depict the landscape using minimal details, only revealing significant land obstacles such as rivers. The Castle tokens are made of wood and abstractly represent the different strongholds of Shu Han or Cao Wei, the most dominant warlords during the Han Dynasty in China.

Second, determine how many Region tiles each player will use during the game. The more tiles used, the longer the game play. The recommended starting number is 4 Region tiles per play, increasing the number of Region tiles for a more advanced game.

Third, organize the remaining Region tiles by type, face-up. This will be “Rivers” and the “Standard” Region tiles. Once stacked, players take turns selecting the Region tiles they will use during the game from the stacks.

This completes the game setup. The player who selected the orange Castle tokens goes first.

A Country at War

Cartography is played in turns (referred to as “seasons”). Each player’s season consists of 3 sequential steps. If the player is unable to take any of the steps, they announce “Pass”. A season is summarized here. 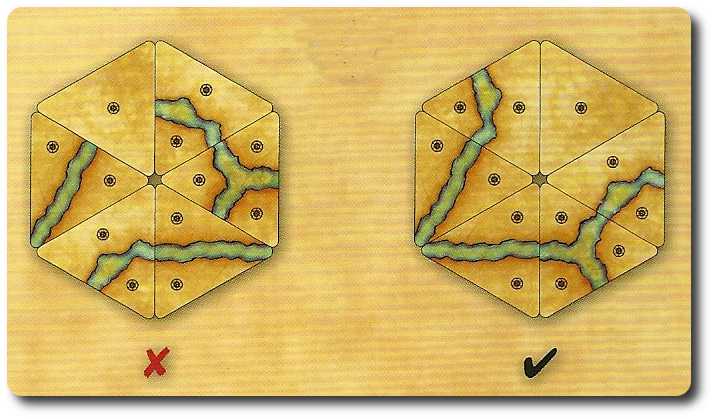 If the player does not have any Region tiles remaining to play or is unable to legally play a Region tile at this time, they skip this step without penalty.

A Castle token cannot be placed in the same spot as a previously removed Castle token after the last Region tile is in play. This rule ensures players do not get locked into a state of indefinite repetition.

If the player is unable to claim land at this time, they skip to the next step without penalty. 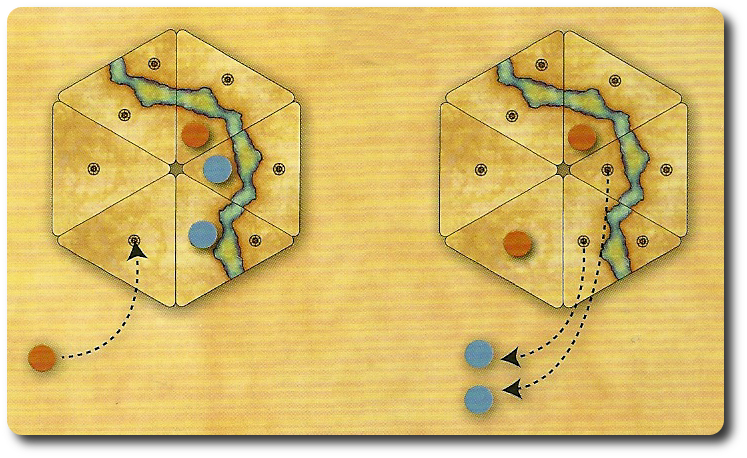 This completes the player’s turn. The next payer now takes their turn starting with step 1 noted above.

A Warlord Falls, An Empire Rises

The game ends when both players have placed all their Region tiles and both players have announced “Pass” without any actions being taken for 2 consecutive seasons. The winner is the player who has captured the most Castle tokens belonging to their opponent.

To learn more about Cartography, visit the game’s web page.

The Child Geeks found the game to be visually appealing. They liked how the “world” of the game opened up to them. According to one Child Geek, “It’s neat to see rivers come into view and mountains. It reminds me of the fog of war you see in video games.” The Child Geeks also liked how the castles were captured. A few of them were familiar with Go and almost all of them had played games similar to Cartography in the past, making it a very easy game to teach. As one Child Geek put it, “I feel that once you’ve played one abstract game  you’ve played them all. They are easy to learn once you understand what abstract really means.” None of our Child Geeks had a negative word to share concerning the game and everyone agreed to give it their approval. 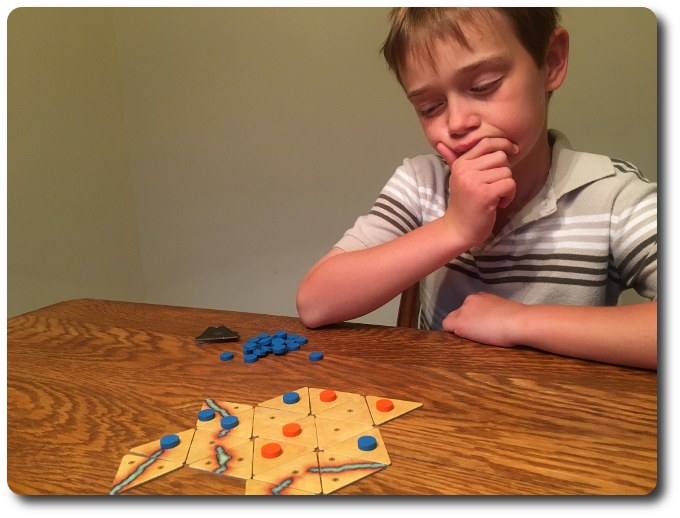 My little warlord contemplates his next move

The Parent Geeks found Cartography to be both visually interesting and mentally simulating. According to one Parent Geek, “A neat game. Small and simple looking, but oh man, this game really requires you to think!” A few of the non-gamer Parent Geeks had difficulty at first remembering how a castle could be captured, but all it took was one or two reminders before they were sacking castles like pros. According to one such non-gamer Parent Geek, “I like this game. I like how it looks and how it plays. I get a bit frustrated at times with the castles, but I think it’s a fun game anyone could enjoy.” When the games were over, the Parent Geeks all agreed that Cartography was a game perfect for the family and their friends.

The Gamer Geeks were mixed. According to one Gamer Geek who summed it up fairly well for his group, “The game is fine, but I think it’s underwhelming.” Which is to say, none of the Gamer Geeks could find any fault with the game other than it didn’t keep their interest. Another Gamer Geek said, ‘This game has depth and strategy, tactics are necessary to win, but I never really felt all that engaged with it.” That wasn’t the case with all the Gamer Geeks, of course. A number of them found Cartography to be just as engaging as it was entertaining. According to one of these Gamer Geeks, “It really is a mix of Go and Carcassonne. You have to think both short and long-term, bait your opponent and bluff your way to victory. I’m really enjoying it.” When all the votes were in, the Gamer Geeks remained divided, resulting in a mixed level of approval from the gaming elitists.

I have heard a number of players describe Cartography as a mix of Go and Carcassonne. I cannot disagree with this description, as elements of both games are easily found in Cartography. However, the use of the game mechanics has not resulted in a game that plays similar or feels like a blatant copy. Cartography stands on its own as a unique game, that just happens to have some well-known mechanics underneath its hood. To say that Cartography is like Go would be like saying a Toyota is like a Lamborghini simply because they both have engines.

This is important for two reasons. First, for those who already have a copy or enjoy the games Go and Carcassonne, Cartography has something unique to offer. Second, because the game play is unique and yet familiar, it fits a hard to satisfy itch. Many players want a new game to play that does not require a lot of time to learn or to play. Individuals familiar with Go or  Carcassonne (or even both) will find Cartography to be a game that is quick to learn, even quicker to play, and yet still provides an engaging challenge.

I enjoyed the game and can sympathize with the Gamer Geeks and their point of view. The game play can feel underwhelming at times, but I believe this to be the direct result of the skill level between opponents being out of balance. For example, when I play my 6-year-old (who is rather good at the game), the overall experience feels fairly shallow due to the game play being less than challenging. On the other hand, if I were to play the game with a Gamer Geek, Cartography takes on aspects of a Wargame and each moves feel very important. In the middle is the game itself that highly depends on the skills of the player to make it what it wants to be. That is to say, in order for Cartography to be a well-balanced and challenging Abstract Strategy game, both players need to be fairly evenly matched. If the players are out of balance, so is the game.

Which is not a bad thing. Chess suffers the same fate when a skilled player engages a novice. The same can be said for Cartography. So where does that leave us? To me, I think it’s an excellent game. It challenges players to think on multiple levels, provokes risk taking, and requires tactical play. To what extent will depend on the opponent. Do play this game of map making and kingdom building when time permits. Find the right opponent and you’ll be working for a victory every step of the way.