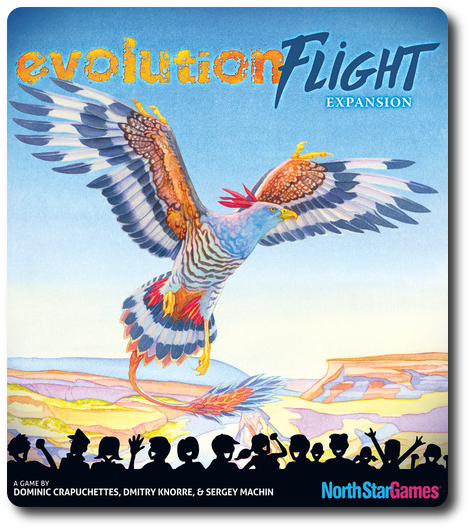 Mankind has observed birds since they first looked in the sky. From that moment, the hearts of man have been filled with rapture and longing, for birds encapsulate a kind of freedom that can never be ours. But the sky and those things that fly in it are not immune to the same problems as earthbound creatures. Claws and teeth are equal to talons and beak. Hunting grounds exist both underfoot and above our heads.

Evolution: Flight, designed by Dominic Crapuchettes, Dmitry Knorre, Sergey Machin, and published by North Star Games, is comprised of 1 Cliff board, 12 Avian Species boards, 34 Trait cards, 14 Event cards, and 12 Flight Trait cards. All of the game components and illustrations match the base game, allowing the expansion to fit seamlessly with the rest of the game components.

Note: The base game, Evolution, is required to play Evolution: Flight. This game expansion was released after the second edition of Evolution was made available, but it can still be played with the first version of the base game.

Of Feathers and Fury

For the most part, the Evolution game set up remains the same with only a few exceptions. A complete summary of the game rules and game set up can be found in the Evolution game review. When setting up the game with Evolution: Flight, the Avian Species boards and the 12 Flight Trait cards are placed next to the Land Species boards. Then the new Trait and Event cards are shuffled in with the core game’s deck. Finally, 40 cards from the deck are removed at random and set aside. These removed cards will be used later in the game instead of shuffling the discard pile. When everything is set up, the Cliff board is placed next to the Watering Hole board.

But what do the new game components do? Let’s find out.

Like the Land Species boards, the Avian Species boards keep track of the bird’s evolutionary progress. In this case, body size, population, and food supply. One will quickly note that the body size of an Avian is capped at “3”, meaning they will never be as big as their land-based competition, but lack of size allows for flight. The discard price to bring an Avian into play is 2 cards instead of 1. If the price can be paid, the player collects 1 Avian Species board and 1 Flight Trait card. 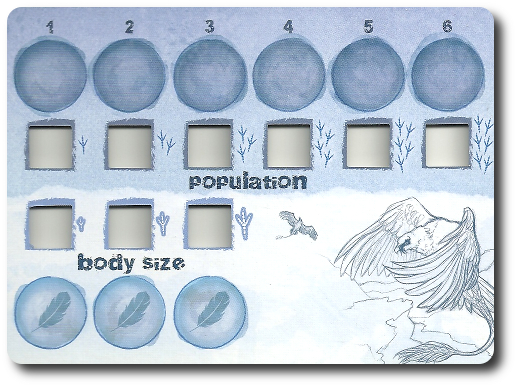 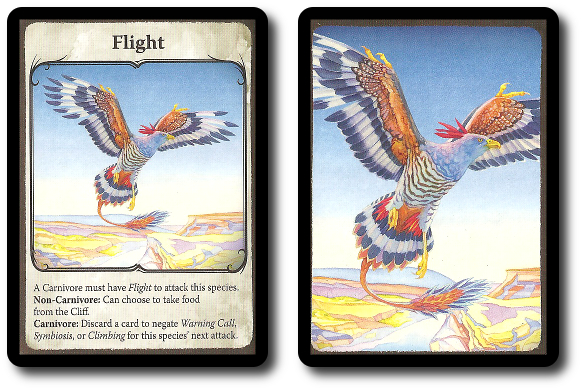 A number of new Trait cards are included in the game expansion. Most are focused on the Avian theme the expansion supports, but there are a few Trait cards that are available to all players. For example, the “Camouflage” Trait card gives the species the ability to hide from all except those predators with good eyesight, and the “Nesting” Trait card allows both Land and Avian species to collect additional food. 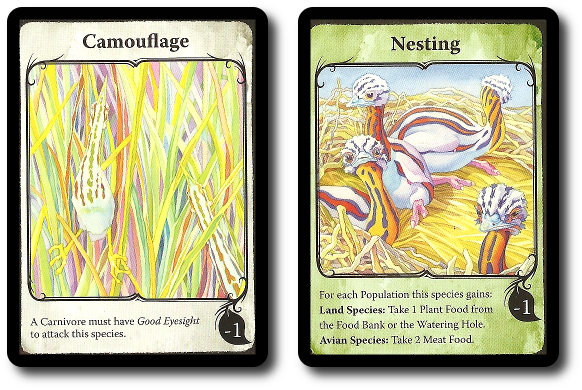 Event cards are new to the game. Event cards can only be played at certain times and go directly to the discard pile. Until they are played, they remain in the player’s hand. Two Event cards are introduced in the game expansion, “Dive-Bomb” and “Seed Dispersal”. 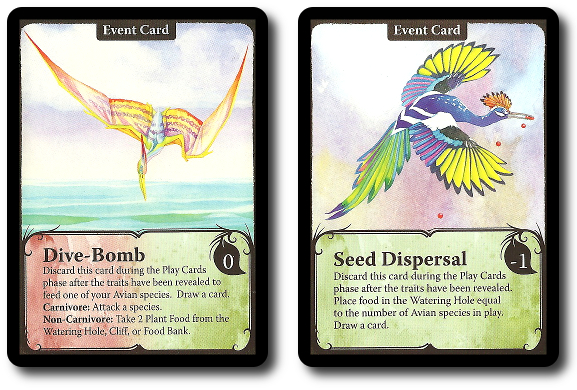 The Cliff board serves as a food source and is used in the same way the Watering Hole is in the base game. However, the Cliff is only available to creatures with the Flight trait. 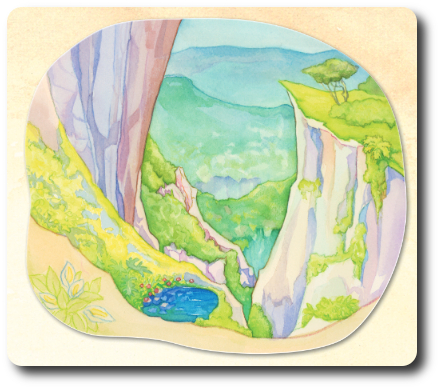 The game expansion was met with great enthusiasm by all our groups and was quickly included in their games. The few new rules of play never tripped up any of the players and the game sessions always went smoothly. Immediate focus was put on creating an Avian. For the most part, the process to create one was not overly difficult. Playing one was, however. The Land species are bigger and give the player more wiggle room. Not the case with the Avian species. I wouldn’t go so far as to suggest they are harder to play, but their limitations did force players to be more conservative.

What the game expansion brings to the table is more to think about. It does not make the game more difficult, but it does add a new layer of depth to an already strategic and tactical game. This is not just more paint on the wall or just more game components. This expansion evolves the game, so to speak, and opens a new road. You can only play a game so many times, even those you really enjoy, before they become stale. Evolution: Flight breathes new life, opens new doors, and invites the players to keep playing, keep exploring, and keep having fun.

Is the expansion worth playing? Definitely. It most certainly does expand and extends the game’s playability, depth, strategy, and tactics. It does all this with seamless integration with the core game and introduces new ways of playing without burdening the players with lots of new rules. That is exactly what a game expansion should do. It need not reinvent the wheel, but it should expand on that which made the base game great. Evolution: Flight does this and it begs the question: what’s next? Can we expect more expansions for Evolution to be released? Fish, whales, and sharks perhaps? Ants, beetles, and bees? Whatever is down the road, one thing is for certain. Evolution can grow, as Evolution: Flight has proved.

If you are a fan of Evolution, you owe it to yourself and your fellow players to try this expansion. It’ll make your game soar to new heights. Well done, North Star Games. Well done.