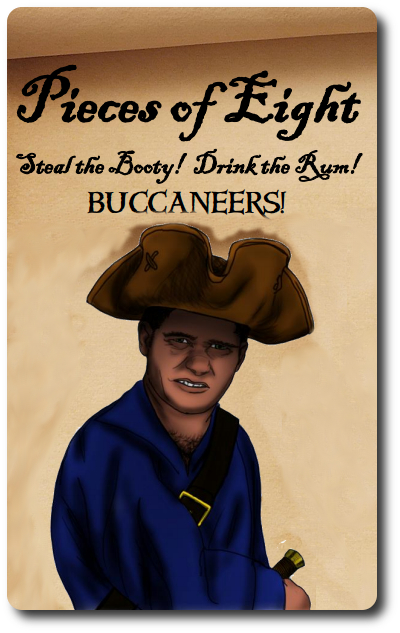 Every pirate will eagerly tell you that if a little is good, more is better. This sentiment is the backbone of all that they live and die for. They never have enough rum, gold, or adventure. It drives them into danger and often times rewards them with fortune. Or death. Mostly death. Still, pirate captains are never hurting for volunteers to help man their ships!

Pieces of Eight- Buccaneers, by TalkingBull Games and an expansion to Pieces of Eight – Steal the Booty! Drink the Rum!, is comprised of 36 new cards to play with in the Game deck. No new card types are introduced. More Crewman to hire, more Raid cards to challenge, and of course, more parrots and other pirate paraphernalia to equip.

To set up the game expansion, simply take the 36 cards and shuffle them in with the base game’s Game deck.

Of course, we are assuming you have read the set up for the base game…

Of Pirates, Parrots, and Possible Fortune

This expansion includes a number of new cards worth mentioning, but we’re going to keep the list down to our favorites. One could accurately sum up the expansion as “adding more of the same”, but that is just a bit too vague for us, so here are a few of the cards we really like and we think make the expansion fun.

Three new Raid cards are included in the game expansion. These include the Village which is a pretty easy Raid to win, but if a player looses, it really hurts. The Village might seem like an easy target, but it won’t go down without a fight! The two other Raid cards of note that are included in the expansion are the Merchant and Slaver ships.  The Merchant ship is a difficult raid, but it provides a nice reward of 3 cards. More cards means more options, but it might also force the player to trigger events they don’t want. Like all things in the game, there is risk and reward. The Slaver ship is a much easier opponent, but instead of providing cards or a Piece of Eight as a reward for a successful raid, the player is able to take 1 Crewman card from the discard pile and add them to their crew! 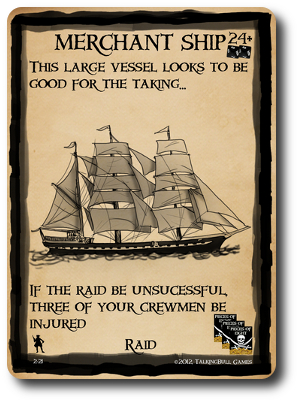 The only new Crewman card included in the expansion is the Buccaneer. These are exceedingly strong crewmen (strength of 10) and make any ship they are on a difficult foe to overpower! However, a Buccaneer will only work for a pirate captain who is willing to pay for their services. Specifically, a single Piece of Eight. That might sound expensive, but you must also consider that there is no limit to the number of Buccaneers a player can employee! If the player wanted to, they could spend a good deal of their hard-won Pieces of Eight to hire the most dangerous ship’s crew the great blue sea has ever had he privilege of keeping afloat. 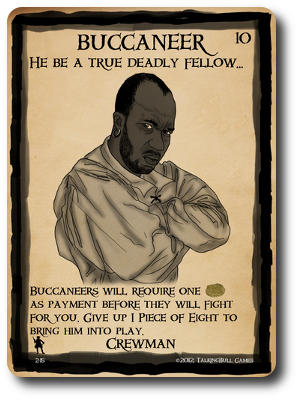 No pirate is complete without  a parrot to keep them company! This expansion includes two new parrots worth squawking about! I know…horrible pun. The first is the Talking Parrot that not only adds +3 strength to any Crewman or Captain card it is attached to, but is also allows the player to look at the hand of each of their opponents. This is a one time effect. The second is the Dead Parrot, which is exceedingly cool for two reasons. First, the flavor text on the card is taken from a Monty Python sketch. So awesome. The second is that the card forces players to get ride of their parrots! FINALLY! 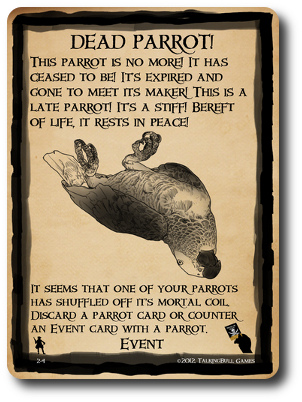 There are a number of other cards in the deck that we are not going to go into detail about. They mostly include more events and supplies. There are also more Pirate Versus Pirate cards, which will allow players to interact and mess with each more. This will most certainly be well received by those who believe Pieces of Eight feels a bit like playing in a vacuum at times. 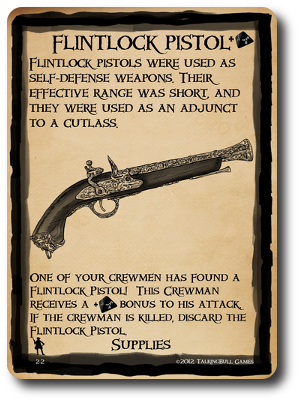 To learn more about Pieces of Eight – Buccaneers, visit the game’s web page on the Game Crafter.

With no new rules to learn and fast inclusion with the base game, the expansion is an easy one to play with right out of its box. For those who like to keep expansions separate from the base game when not in play, there is an icon on all the expansion cards to help make separating them an easy task. But really, I don’t see why you would ever want to. The cards are great and add more fun to the game without really adding more weight to the game. No new rules, no additional set up, and no increase to the game’s length. Just more crazy pirate awesomeness that is sure to make players smile.

And all our players did. When we introduced the new cards, the responses were either full of excitement or somewhat sarcastic remarks that suggested the cards should have been included right from the start. As for me, having played the base game so many times, I was very happy to see new cards show up in play. As far as I’m concerned, the expansion adds to the game’s replayability and fun, making it shipshape and good to go. Many of our players agreed and gave it their approval. The only negative criticism we received was a bit of disappointment that there were no new Captains, like One-Eyed Willie from The Goonies.

One Response to Pieces of Eight – Buccaneers Game Expansion Review