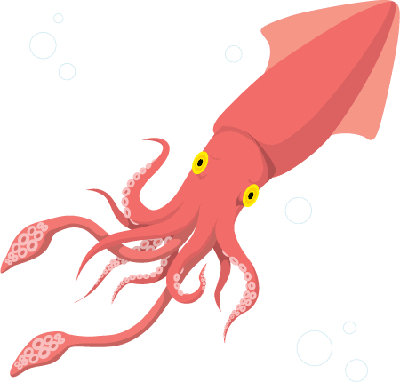 You can hear the splashing of water and the screams of your fellow castaways as you swim like mad to the rescue boat. You have already been bitten by one of the sharks, but your will to survive and fear drives you on. Ahead of you is the ship and its crew who shout words of encouragement. You pause a moment to catch your breath and scream in terror as you see a giant squid come to the surface. Becoming a pirate was a poor life choice…

Get Bit! Squid Die game expansion, designed by Dave Chalker and published by Mayday Games, is comprised of 1 Squid die (a customized six-sided die). The level of quality presented in the expansion is the same as the core game, Get Bit! Deluxe, which is required to play.

Second, place the Squid die to one side of the game playing area.

The Squid die is rolled before every round of play. Players should not select a card until AFTER the Squid die has been rolled.

The possible die values include:

Where the Dolphin Die game expansion flopped, I think the Squid Die will succeed. Half of the time, the game won’t change (“Calm Seas” found on 3 of the 6 sides of the die). During the other half, the game is going to kick players’ in the teeth. Introducing an order reversal for the shark bits and randomly played cards is going to cause some very interesting chaos, but nothing that cannot be played through or recovered from. Still, I’m curious about just how well it will be received, as many players enjoy Get Bit! Deluxe exactly like it is.

I am most pleased to report that the Squid Die game expansion was well received by all three of our groups, but it was not always asked for. According to one Child Geek, “I like using the Squid, but not all the time.” The Parent Geeks said more or less the same thing with one Parent Geek adding, “I like how it keeps you guessing, which makes each round feel a lot more intense!” Even the Gamer Geeks had good things to say about the Squid Die, with one Gamer Geek stating, “Each round now becomes an unknown and you really have to watch what cards you have to play.”

I also enjoyed the Squid Die game expansion, but I only include it when I am tired of the core game play. After playing Get Bit! Deluxe many, many, many times, the Squid Die adds a much-needed element of surprise that keeps the game feeling fresh. However, I’d only recommend using this expansion if the core game is well-loved and often asked for at your gaming table.