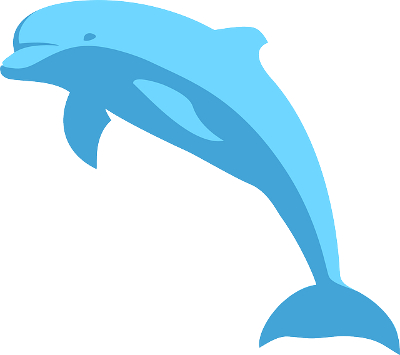 As you swim through the ocean to the rescue ship, your heart is full of dread as you see the shark fins circling closer and closer. Fear pushes you as you know an attack could come at any moment. Suddenly, a shark charges and you can see its teeth below the waves! Seconds before the shark reaches you, a dolphin smashes into it! The dolphin saved you this time, but it’s best not to rely on luck or tempt fate. SWIM!

Get Bit! Dolphin Die game expansion, designed by Dave Chalker and published by Mayday Games, is comprised of 1 Dolphin die (a customized six-sided die) and 6 Dolphin cards. The level of quality presented in the expansion is the same as the core game, Get Bit! Deluxe, which is required to play.

Second, give each player a Dolphin card. This replaces their highest numbered card in their hand. The replaced number card is returned to the game box.

Third, place the Dolphin die to one side of the game playing area.

Dolphins to the Rescue!

Two or more players who roll the same Dolphin die value are considered “tied” and their Pirate figures do not move as a result.

Essentially, this expansion introduces a card that has a random value each time it’s rolled. That’s interesting, but I’m not convinced it’s necessary. I think the Child and Parent Geeks will enjoy it, but introducing a random game element into a game that doesn’t need it might be poo-pooed by the Gamer Geeks. Overall, however, I don’t see the game expansion disrupting the game play or making the game longer as a result of its use.

As expected, the Child Geeks and the Parent Geeks enjoyed the game expansion. A few of the Child Geeks started making dolphin sounds, which I can only describe as being “bird chirps with tongue clicks”. The Parent Geeks also enjoyed it, with the casual gamers welcoming the random rolled card value result, creating great upsets in the Pirate figure line order. None of the Child or Parent Geeks thought the expansion was necessary, but all agreed it was fun to play with. Both groups approved it with a smile.

The Gamer Geeks did not. As expected, they didn’t think the game expansion was necessary or even warranted. According to one Gamer Geek, “This game expansion doesn’t bring anything to the game that I think is missing, is needed, or was even asked for. I don’t see any reason to play it again.” Another Gamer Geek said, “It’s not a bad idea, but breaks what I think is one of the most interesting aspects of the game. Yes, it adds risk, but I like how you have to watch what cards you are playing. This random card value throws things off, trumping smart plays.” None of the Gamer Geeks thought the game expansion was bad, but none of them wanted it included in their games. The end result was a rejected endorsement from the gaming elitists.

Ultimately, I believe the value of this expansion is going to be based on what type of game you want Get Bit! Deluxe to be. If you enjoy the hand management and the necessary logical thinking to survive, then adding the Dolphin die isn’t going to improve your game. If you like the risk versus reward in the game and want to see more, then most certainly add the Dolphin Die game expansion to your next playing session.

Just keep in mind that Dolphins are fickle creatures…

One Response to Get Bit! Dolphin Die Game Expansion Review