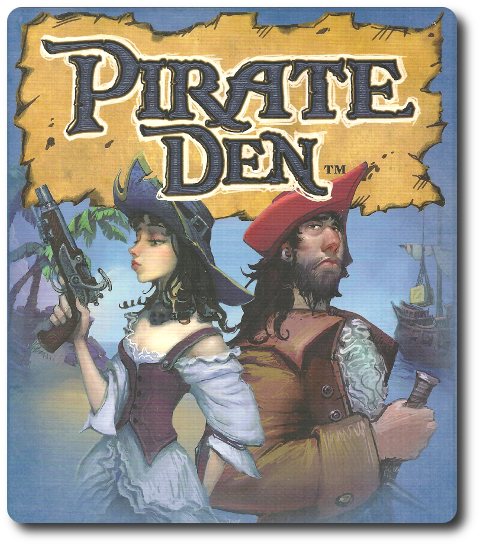 Characters Jack Sparrow and Mr. Gibbs from the movie Pirates of the Caribbean: The Curse of the Black Pearl were fond of saying “Take what you can; give nothing back.” That is exactly the goal in this game. A clever pirate captain knows that luck is as fickle as the sea, but only fools wouldn’t risk it all for wealth.

Pirate Den, designed by Richard James, Boyan Radakovich, and published by Crash Games, is comprised of 60 Loot tokens (20 “British” red, 20 “Dutch” blue, and 20 “Spanish” yellow), 25 Buried Treasure tokens, 5 Pirate Captain mats, 55 Action cards (11 cards per pirate captain), and 1 cloth bag (for the Loot). The game component quality is excellent. The mats are thick and the cards are very durable. The tokens range from small rock-like pieces of colorful plastic to larger gold nugget formations. Artists Thomas Deeny and Todd Harris did an outstanding job of capturing the different pirate captains in a way that is both highly stylized and immediately recognizable.

To set up the game, first allow each player to select the Pirate Captain mat of their choice. All of the pirates have the same abilities with the only difference between them being how they are depicted in the artwork. Selected Pirate Captain mats are placed in front of the player. Any Pirate Captain mats not selected are returned to the game box. 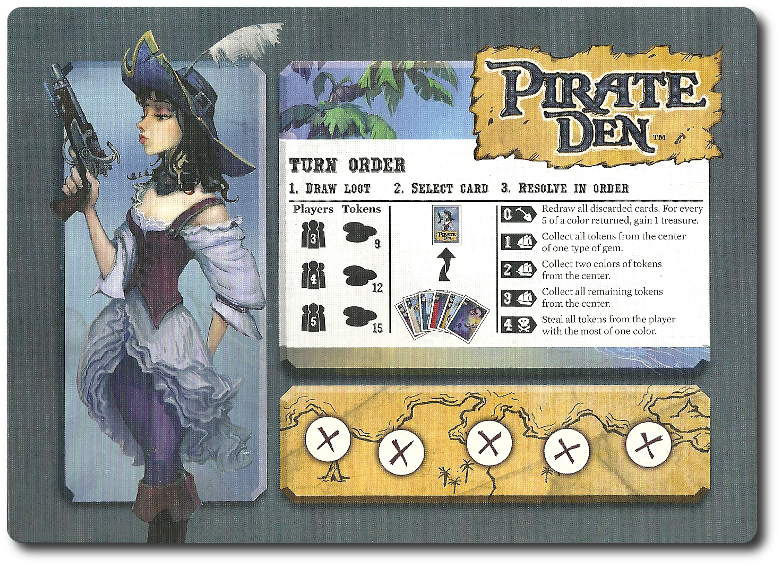 Second, give each player 11 Action cards that match the selected Pirate Captain mat. All players have identical Action cards. Any Action cards not taken should be returned to the game box.

That’s it for game set up. Time to set sail and make a fortune.

The Lure of Loot

Pirate Den is played in rounds with no set number of rounds per game. Each round is comprised of 5 sequential phases. A single round of game play is summarized here.

Thematically speaking, the Loot tokens represent the available wealth to be stolen from 3 different merchant companies (the British East Indies Company, the Dutch East Indies Company, and the Spanish-Portuguese Empire). If the Loot bag ever runs out of tokens or no more tokens of a specific color are available, no action should be taken to replace or substitute them.

Place the Loot bag to one side of the game playing area.

Each player is given an identical set of 11 Action cards at the start of the game. These Action cards determine what the player will be attempting to do for the round. Each Loot card has a Loot color value, an Action type, and an Initiative number. 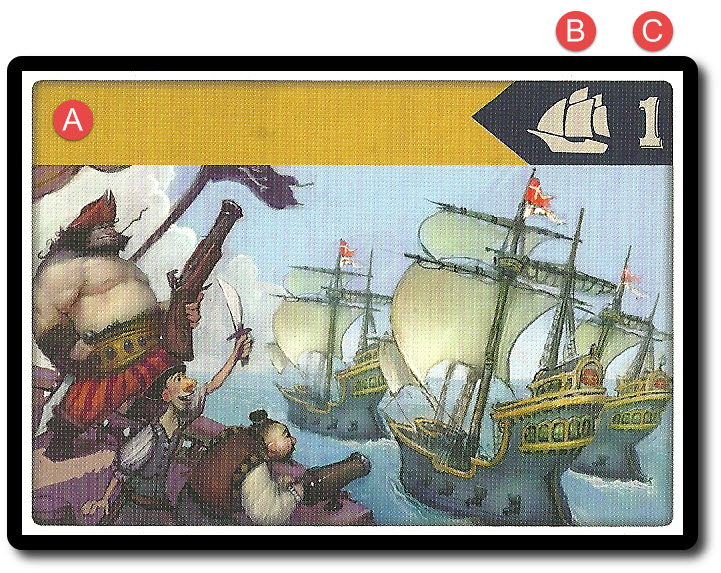 A) Loot Color: This determine what Loot token colors the Action card is targeting (one or more colors are possible).
B) Action Type: Each action (which is also summarized on the player’s Pirate Captain mat) is meant to either secure or take Loot.
C) Initiative Number: Action cards are played at the same time by all the players, but they are resolved by the Action card’s Initiative number value, starting with the lowest number fist.

Pirate Den is a game of bluffing. Players place their selected Action cards face-down in front of them and should feel free to do as much table talk as possible. The idea is to persuade others, smoke screen possible objectives, and in general make it difficult for other players to determine what you may or may not do for the round.

After all the players have placed their Action cards face-down in front of them, continue to the next phase.

On the count of 3, all players reveal their Action cards. Keep the Action cards in front of the players.

(Initiative 1) Collect all the Loot tokens in the middle of the playing area that match the Action card’s Loot color.

(Initiative 2) Collect up to 2 different colors of Loot tokens in the middle of the playing area.

(Initiative 3) Collect up to 3 different colors of Loot tokens (or any remaining) in the middle of the playing area.

(Initiative 4) Collect all the Loot tokens from the player that has the most collected Loot tokens that match the Action card’s Loot color.

With the actions resolved, it’s time to do a little upkeep and cleanup.

Organize any remaining Loot tokens in the middle of the playing area by color and then group the colors into stacks of 5 Loot tokens each. Players should do the same for their personal stash of Loot tokens.

That’s it for the round. A new round now begins starting with phase 1 noted above.

The player with the most points wins the game. Ties are broken by determining which player has the most Loot tokens of a single color.

The Child Geeks quickly learned how to play and got right into the game. They understood the most basic aspects of the game play and developed their own special take on how one should bluff and misdirect in the game. For example, one Child Geeks always announced which card their neighbor would play, thus redirecting eyes from her. Another Gamer Geek would announce which tokens they were going to take and why, which was a pretty solid bluff. In all cases, the Child Geeks were able to collect tokens when possible and bury treasure when needed. Games were surprisingly tight with no one player ever in the clear lead. According to one Child Geek, “I really like this game. It’s fast and you always have this moment of panic when you reveal your cards. Makes me smile.” When all the games were over and the treasure buried, the Child Geeks voted to approve Pirate Den. 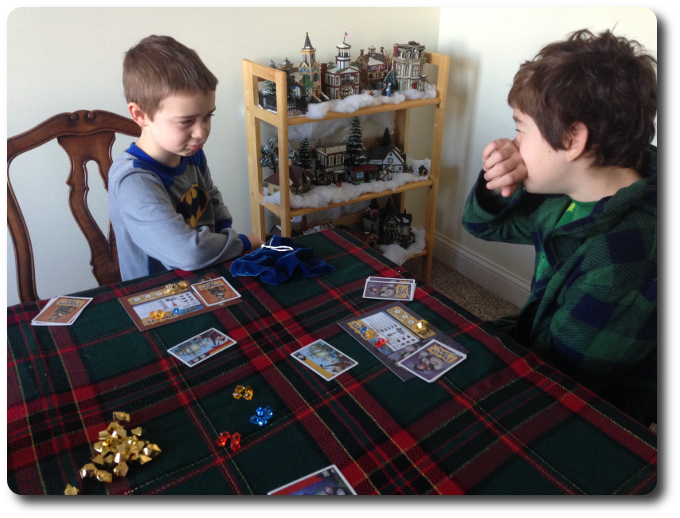 Even when you get tricked, you can’t help but smile just a bit

The Parent Geeks also enjoyed themselves and demonstrated a more refined, albeit nastier, version of bluffing. They would announce the cards played by their opponents and help the table keep track of what was played. They would also lie and badmouth. Never out of line when playing with the Child Geeks, but when just the Parent Geeks played, the gloves came off. According to one Parent Geek, “The best part of this game is messing with other players’ minds and sneaking up on treasure without anyone seeing it coming.” The Parent Geeks demonstrated a surprisingly aggressive level of competitive game play, which seem a bit out of place for Pirate Den, but worked well. Win or lose, the Parent Geeks all voted to approve the game.

The Gamer Geeks were of two minds when it came to this game. About half the group found Pirate Den to be an enjoyable filler at best. Very light, erratic at times, and lacking much in the way of depth of play other than the bluffing with the cards. Still, they enjoyed themselves and put Pirate Den in the same category as a Beer and Pretzel type game, with just enough player interaction to make the experience enjoyable. According to one of these Gamer Geek, “This is a light game, make no mistake, but it has enough game play and player interaction to make it fun. I won’t be challenged by the game, but I do expect I will be entertained.” For all the reasons half the Gamer Geeks enjoyed Pirate Den, the other half did not. The more elite elitists (if there can even be such a thing) found Pirate Den to be completely void of any strategy, tactics, depth, and most importantly to them, challenge. According to one of these gruff Gamer Geeks, “This game is nothing more than play a card, pick up gems, play a card, rinse, repeat, yuck, no thank you. You can comfortably play this game by just randomly picking a card.” Which they did, never resulting in a win, but their point was made. A random card draw resulted in grabbing loot as often as a card played with thought. The end result was a mixed approval from the Gamer Geeks.

I would not suggest to anyone that playing Action cards at random is a good idea. You’re chump if you do. The Gamer Geeks were attempting to make a point, which they did, but such actions ruin the spirit of the game. The bluffing aspect of the game play is all important for Pirate Den. It’s what makes the game fun, in my opinion. The table talk, the sly remarks, and the over the top shouts of joy or dismay make the game come to life. If you play Pirate Den with individuals who want to be quiet, not interact, and not get into the game, it will fall flat. But this can be said about every game out there. More so here, as Pirate Den is about interacting and one-upping your opponent. Not just playing cards and collecting tokens.

Game play wise, I’m pleased. The game was easily taught to the Child Geeks and non-gamer Parent Geeks quickly understood the game’s concept and goals. It was a very easy game to get back to the table and everyone, including those who lost, had a good time. This makes me feel that Pirate Den really is a family game, which is exactly how it’s being marketed. Young and old, skilled and unskilled, were all able to play the game as equals.

Those who play games a lot and seek gaming experiences rich with strategy, tactics, and depth of play will be disappointed with Pirate Den. The straight forward game play and repetitive nature of the game rounds will make many elitists frown in dismay. For these people, the only aspect of game play that will save them from bitter disappointment is the player interaction and the energy at the gaming table. I wouldn’t go so far as to say that Pirate Den is a social game, but it does have social game play elements that are vital to the game’s overall experience.

Pirates and geeks go together like cheese and crackers. This pirate themed game plays fast, has just enough of everything to make it easy to teach and engage, while at the same time leaving the door open to creative bluffing and misdirection. As a family game, it will do very well at your gaming table. As a game to entertain gaming elitists, Pirate Den is best left to sail away.