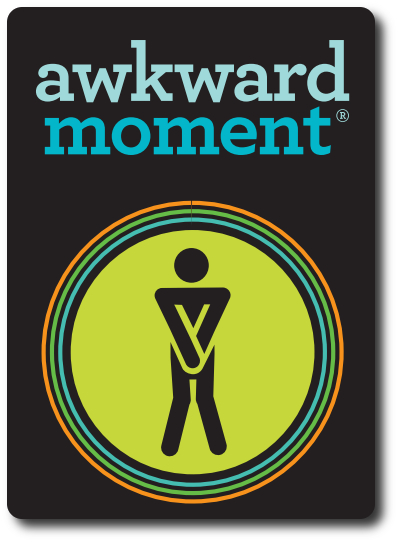 It happens to everyone when you least expect it. Something is said out-of-place, a reaction is given, and a very long and painful silence ensues. Ah, awkward moments, how I loath thee. But these impossibly long stretches of discomfort need not end in tears! If you have your wits about you, you can emerge from a very awkward situation glittering with class! This game gives you a chance to practice slashing the most awkward of moments in twain!

Awkward Moment, designed by Zara Downs, Mary Flanagan, Andrea McClave, Sukdith “Sukie” Punjasthitkul, Viviana Ramos, Max Seidman and published by Tiltfactor, is comprised of 100 Moment cards, 284 Reaction cards, and 48 Decider cards. The cards are very minimalistic in design and presentation. The game itself won’t catch the eye, but the noise coming from the players will draw a crowd.

To set up the game, first separate the Moment, Reaction, and Decider cards into different piles. Each card type is a clearly labeled and has a different color making this an easy exercise.

Second, shuffle each pile to create 3 decks. Place the Moment and Decider decks, face-down, in the middle of the playing area. The order in which the decks are placed is not important. 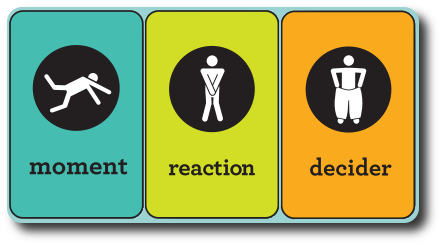 Third, deal to each player 5 Reaction cards, face-down. Players should look at their cards, but keep them hidden from their opponents until played. Place the remaining cards in the Reaction deck next to the other two decks.

This completest the game set up. Determine who will be the first player and begin.

The Art of Awkwardness

Awkward Moment is played in turns. On each turn, one player will be the designated “Decider”. The first player selected during game set up will be the initial “Decider”. A typical game turn is summarized here.

The “Decider” draws the top-most Moment and Decider cards from their decks and places them face-up so all the players can see them. The “Decider” should read each out loud.

All the players now look through their hand of Reaction cards and select one to play that they think best applies to the Moment and Decider cards. Reaction cards are played face-down to the “Decider”.

The “Decider” now takes and shuffles all the played Reaction cards to ensure they do not know which card belong to each player. The Reaction cards are then read out loud one at a time and placed face-up. After all the Reaction cards have been revealed, the “Decider” selects one Reaction card that they feel best addresses the awkward moment using the guidelines provided by the Decider card. The owner of that card is given the Moment card which is placed in front of them.

All the Reaction cards played are now collected and discarded, as is the Decider card. Each player is now dealt a new Reaction card giving each player 5 Reaction cards in their hand. A new turn now begins with the player to the “Decider’s” left becoming the new turn’s “Decider”.

Optionally, at the start of a new turn, players can discard their hand to draw a new hand of Reaction cards. Doing so penalizes the player and they cannot participate in the current turn. Players can take this optional action only once per game.

A number of game variants are available right out of the box for those players looking to change how the game is played. Each game variant is summarized here.

After each turn of play, the winning “Reaction” and played to Moment card are used to tell a story. The story begins in the first turn and continues in subsequent turns, with the turn’s “Decider” contributing to the story before a new turn begins.

Instead of awarding the Moment card, the “Decider” selects two Reaction cards and has the players who placed them act out the awkward moment with their selected reaction. Players should be as dramatic as possible. The winner is selected by the “Decider” based on the player’s quality of performance.

Choose Your Own Awkwardness

This game variant comes with its own victory condition! The player who wins the turn DOES NOT draw a new Reaction card for the next turn. Nor do players always draw back up to 5 cards. The total number of cards in a player’s hand will gradually decreases by 1 for each Moment card they win. The first player to win 5 Moment cards wins the game.

Awkward Moment would appear to be a lot like Apples to Apples, a game I’m not a fan of but keeps being asked for. If it’s like Apples to Apples, Awkward Moment should be a very easy game to teach. It’ll also be a game players will either quickly love or hate. For the Child and Parent Geeks, I predict the game will do very well. For the Gamer Geeks, I predict very low-levels of tolerance at best and seething disgust at worst.

Awkward Moment is best taught as you play the game. Deal out the cards, reveal the first Moment and Reaction cards, and begin. If players have questions, they’ll most likely only pop-up during the first turn. All future turns are played like the previous turn, making the game’s learning curve exceedingly simple. Note that players are required to read in order to play the game. This means your younger Child Geeks who cannot yet read will be left out of the fun. Or, do as I do, and team them up with an older Child Geek who can read or a Parent Geek.

After teaching Awkward Moment to my oldest little geek, I asked him his thoughts on the game so far.

I’m hopeful that the similarity to other games will not influence how our players view Awkward Moment, but you know that’s a fool’s hope. Still, worth a try, eh? Let’s see if Awkward Moment is a fun time for all or uncomfortably lives up to its name.

The Child Geeks enjoyed the game, finding it to be fun, entertaining, and hilarious. Many stories were shared and I highly suggest you allow each player to tell their own story despite it increasing the game’s length well past the estimated 20 minutes. There is a learning and sharing opportunity here that shouldn’t be missed. Older Child Geeks know a great deal about the trials and tribulations of “being cool” and “fitting in”. Awkwardness is something they go to great length to avoid and deflect. Look, let’s be honest. Junior High and High School can be hell. Awkward Moment opened a door that let our Child Geeks vent, share, and commiserate together. Not sure if any of that is “fun”, but it was certainly well received. After the laughter, eye-rolling, and shouts of “I KNOW, RIGHT?!”, the game was voted on. When the votes were tallied, Awkward Moment was fully endorsed by the Child Geeks. 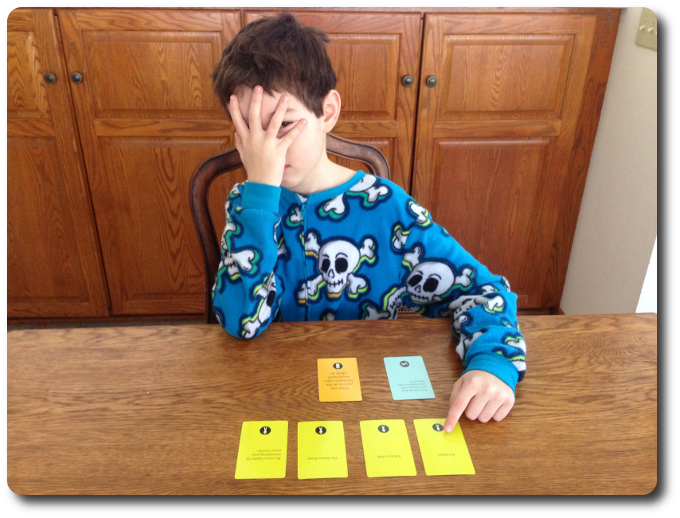 My little geek facepalms himself after reading out loud a Reaction card that said, funny enough, “Facepalm”

The Parent Geeks appreciated the game on two levels. The first being the game’s ability to open up doors of communication that might have been awkward to knock on. The game provided a much-needed “in” for the Parent Geeks to naturally ask questions about school, life, and everything else without sounding like they were being nosey. According to one Parent Geek, “This game taught me a lot more about my kids than I thought it would.” The second was the game play itself, which was enjoyed by all the Parent Geeks. One Parent Geek said, “This is a good alternative to Apples to Apples. I’d play it again without hesitation.” When the games were over, the Parent Geeks voted to approve Awkward Moment.

The Gamer Geeks greatly disliked Awkward Moment. Much of what was returned in way of commentary was not fit or proper to print. Let’s just say that the game was played, not enjoyed, and quickly removed from the gaming table. It might humor you to know that Cards Against Humanity was the replacement game. How’s that for ironic?

Awkward Moment is not what I would consider a “gamer’s game”. It’s light, casual, and very repetitive with little changing from turn-to-turn to keep a Gamer Geek interested. There is no real strategy to speak of since you’re always playing to the Decider card. The only real choice a player needs to make is determining which of their cards has the best chance of winning the turn. This is not always obvious, since it’s very possible that the player has a hand of Reaction cards that do not match the Decider card. At which point, a player is stuck, but still needs to play a card.

That being said, there is a great deal of fun to be had with Awkward Moment when played with the family and with other Parent Geeks. The game can also be leveraged easily as a means to openly discuss awkward social situations and how one should respond. As a teaching tool for schools and youth groups, Awkward Moment is an excellent addition. Its ease of play allows anyone to play it and its many different game variants give the teacher an opportunity to tailor the game without upsetting the game’s core concepts.

But does that make it a game worth playing? As a Party game and an Educational game, I think so. It serves as an easy icebreaker for mixed party groups without demanding much of the guests or the host. When leveraged as a teaching tool, the game becomes a conduit for easy communication and effortless sharing. Tiltfactor designs and publishes games with the sole purpose of inspiring social change and reinforcing positive human values. Awkward Moment does this beautifully without feeling like a social lecture, but the overall result is not a game that is for everyone.