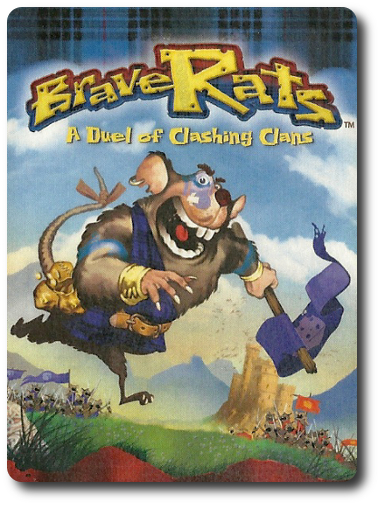 The Rat King is dead! Long live the Rat King! But without an heir to the throne, the kingdom is now in turmoil. Old insults and slights are being remembered among the clans, rekindling old feuds. All agree that the Kingdom of the Rats needs a leader, but who should lead? The two strongest clans both want the Rat Throne for themselves, but it will not be won by words. Fight for your clan’s honor and ultimate rule!

BraveRats, a new take on a game originally designed by Seiji Kanai and published by Blue Orange Games, is comprised of 16 Rat cards (8 red, 8 blue). Each complete set of 8 cards represents a clan of rats who are competing for control of the now vacant Rat Throne. The artwork is superb and does an excellent job of further strengthening the game’s narrative.

To set up the game, separate the cards into two deck (a red and a blue). Each deck will have an equal number of cards and the same Rat card types. Note that each deck represents a different clan (the Yargs and the Applewoods, respectively). While each deck will have the same Rat card types, each rat is portrayed differently. Players should look at their Rat cards, but keep them hidden from their opponents at all times.

And that’s it. Time to battle for the throne!

BraveRats is played in rounds for a total of 8 rounds in a single game. During each round, both players will secretly select one card from their hand and place it face-down in front of them. When both players have placed a card, they reveal the cards simultaneously. The number values on the Rat cards (ranging from 0 to 7) are then compared. The higher numbered Rat card wins the round with the losing Rat card being flipped over. Once a round is completed, a new round begins with each player again selecting a new card from their hand to play. Played cards are set aside and kept face-up (if they won the round) or remain face-down (if they lost the round).

If both players place a card with the same number value, it’s considered a draw and the round is placed on hold. The next round is then played with the winner claiming victory for the current round and any previous rounds that were placed on hold! It’s possible that several rounds are placed on hold during a single game, making one victory a devastating defeat for a player.

Each Rat card represents a key individual in the clan. In addition to providing a number value (which is meant to represent the rat’s strength and prowess in combat), each rat has a special ability. These special abilities are immediately triggered and resolved when the Rat card comes into play, regardless if the Rat card wins the round or not. 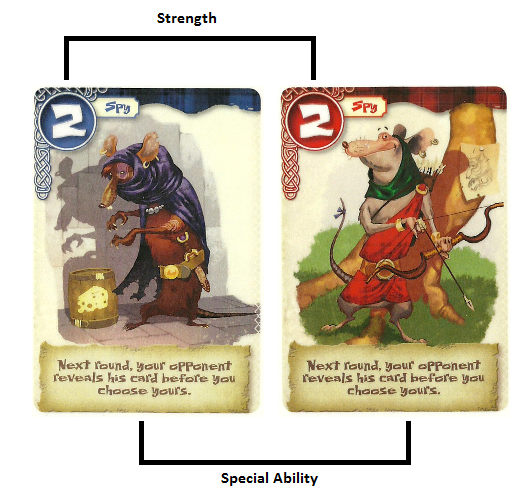 The game continues until one player has won 4 or more victories. This player’s clan claims the Rat Throne and rule over the land!

Several game variants are available that change how the standard game is played.

A Traitor Among Us

Before the game beings, both players select one card from their hand and pass it to their opponent.

May the Luck Be With You

Instead of playing with all 8 cards, each player only draws 3 at a time. From these 3, the player must select 1 to play per round. After each round is completed, the players draw another card. In this way players will always have 3 or fewer cards to select from.

The first player to get 3 victories wins the game, instead of 4.

One player draws 4 Rat cards, selects one to keep, and passes the other 3 to their opponent. The opponent now selects a card to keep and passes the cards back to the player. This continues in sets of 4 until all the cards are have been drafted and each player has 8 cards in total.

Shuffle all the Rat cards together and deal 8 out to each player.

Play a single game 3 times as normal. The player who wins the best out of 3 games is declared the “Emperor for Life” or until the next 3 games are played.

BraveRats will be released in 2014. When it is, visit the game’s web page at Blue Orange Games for more information.

BraveRats is essentially the classic card game War with some special abilities thrown in to keep things interesting. A player must not only consider what cards their opponent has played, but must also consider how to leverage the cards they have so as to make use of their special abilities. Not overly complicated, but it does add a small element of strategy and tactics to an otherwise very straightforward game. It’s worth noting that BraveRats is a re-themed version of the game R. Same conceptual game play throughout, but with rats.

If we consider how fast and easy this game is going to be, I predict it will be enjoyed by the Child Geeks, tolerated by the Parent Geeks, and disliked by the Gamer Geek elitists. I am personally interested in seeing how much additional depth of game play, if any, the special abilities add. Not much, I wager, but I’d be very surprised if the majority of our players didn’t find this aspect of the game play interesting.

Teaching BraveRats is very simple. In fact, if your players know how to play War, just tell them about the special abilities and get to it. If you spend anymore than 2 minutes teaching the game, you are doing it wrong. Note that players will need to know how to read to play BraveRats competitively. This eliminates our younger Child Geeks, even if they already know how to play War. Which they do.

After teaching the game to my oldest Child Geek, I asked him his thoughts on BraveRats so far.

The Child Geeks liked BraveRats and had no problem playing it right from the start. It took them about 2 games (on average) to fully grasp how the Rat card special abilities should be used. Once they did, they were surprisingly difficult opponents to beat. According to one Child Geek, “This is so much better than War. I really like how you get to use the rat powers to change what cards do!” Another Child Geek said, “I think it’s funny that the Princess automatically wins the game if the Prince is played. I guess that means they are in love!” Indeed! Speaking of love, all the Child Geeks were “in love” with BraveRats and gave it their very strong endorsement when all the battles were over. 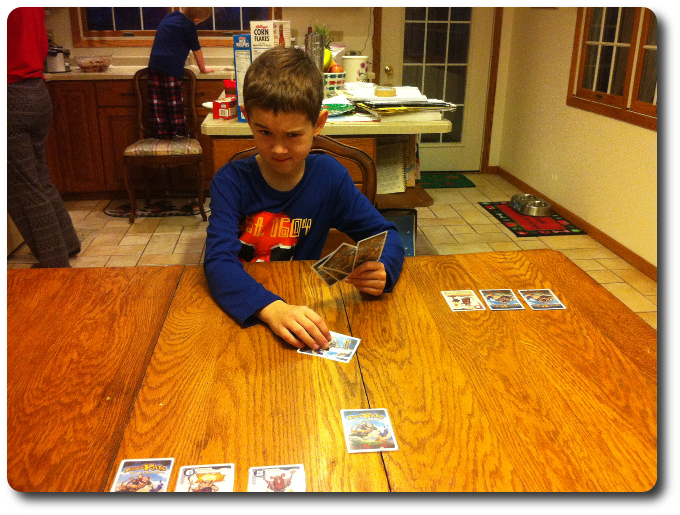 The Parent Geeks were much less enamored with BraveRats. According to one Parent Geek, “I can tolerate this game with my kids, but wouldn’t want to play it with adults.” All the Parent Geeks agreed the game was easy to learn, fast to play, and did require a little bit of thought. But not much. One Parent Geek said, “This isn’t a difficult game, but you do have to put a little bit of thought into it. I would have no problem playing this game with my kids after a long day at the office.” The Parent Geeks, despite their lack of interest in playing the game with their peers, found BraveRats to be a good enough game to want to play it with their children. In the end, that was enough for them to give it their vote of approval.

The Gamer Geeks played the game a few times, thanked me for teaching it to them, and then asked that it never be brought to the table again. According to one Gamer Geek, “This is War, Cyrus. War with cards that have special abilities. No thanks.”  None of the Gamer Geeks could look past the game’s simplicity or what some considered to be poor game play. A few of the Gamer Geeks suggested that the game could be used as a quick filler or as a tie breaker, but not enough. When the votes were collected and tallied, the Gamer Geeks voted to reject BraveRats.

BraveRats is not a bad game by any means, but it is a very simple one. Simplicity can be perceived as a negative by some, which it clearly was by the Gamer Geeks and a few of the Parent Geeks. Ultimately, your level of enjoyment with the game is going to depend on what it is you are expecting. If you want to play a simple and very fast card game where a bit of thought needs to be put into each play, then BraveRats is going to leave you feeling very pleased. This is not a game of great depth, but you can’t snooze through it either. Each Rat card’s special ability can be used to create some fantastic upsets and surprises. Anyone looking for a game with complex strategy and killer card combos is going to be left wanting, however. I’m personally enjoying BraveRats, but only when I play it with my kids.

One Response to BraveRats Game Review