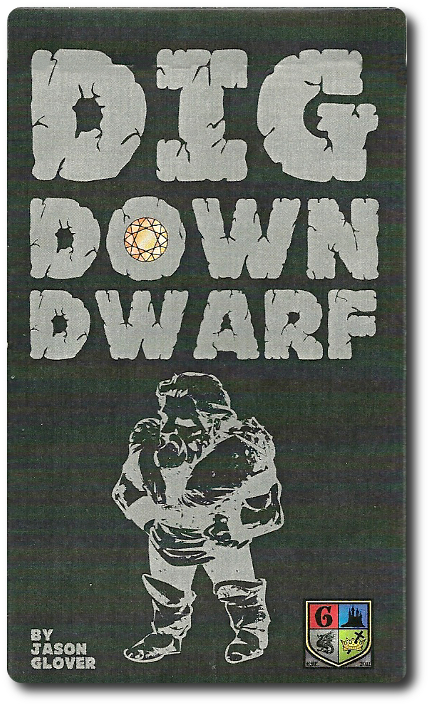 To anyone but a dwarf, a pile of dirt is worthless. Dwarves know better. A pile of dirt represents endless possibilities! Gold, gems, and other precious items could be just below the dirt’s surface. Dwarves work hard to obtain their riches, but no matter how much wealth they gather, a dwarf is always looking to pocket more. Some would call this greed, but dwarves simply consider this to be a strong work ethic.

Dig Down Dwarf, designed by Jason Glover and published by Grey Gnome Games via the Game Crafter, is comprised of 16 standard six-sided dice (4 each in the colors red, blue, green, and black), 37 Gems (1 “Diamond”, 4 “Peridots”, 8 “Citrines”, 14 “Amethysts”, and 1o “Coal” – which really isn’t a gem, but let’s be flexible here…), 4 Player Reference cards, and 1 bag. The Gems are small pieces of plastic which look like candy, so keep your Baby Geeks far and well away from this game! The cards are made of thick cardstock and very durable. It’s worth noting that this game was a finalist in the Micro Game Challenge hosted by the Game Crafter and sponsored by All Us Geeks and Father Geek. 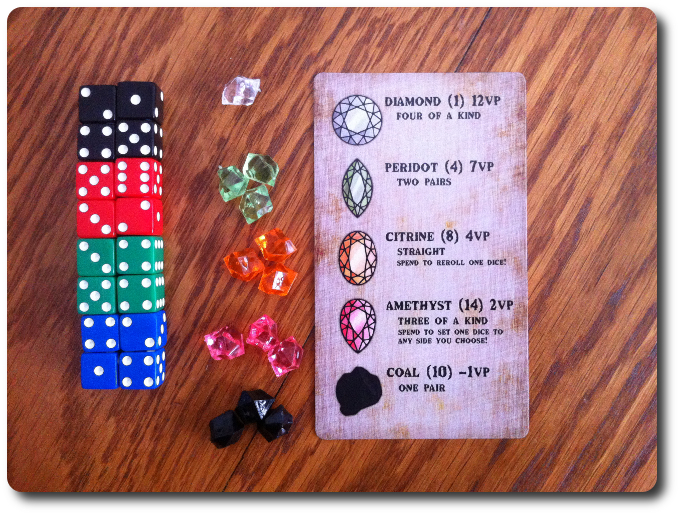 Getting Ready to Dig

To set up the game, first give each player a set of 4 six-sided dice. The dice should all be the same color.

Second, give each player a Player Reference card.

Third, place all the Gems in the bag and mix them up.

Fourth, draw 6 Gems from the bag without looking. Place these Gems in the middle of the playing area and group them by color (which identifies the Gem type).

That’s it for game set up! Let’s get digging!

Dig Down Dwarf is played in turns with no set number of turns per round. On a player’s turn, they will complete the following sequential steps.

The first thing a player does is draw 2 Gems (or 3 Gems in a  2-player game) from the bag. This is always done blindly and results in random Gems each turn. These Gems are placed in the middle of the playing area and grouped with any matching Gem types that might be available. If the Gem drawn does not match any available Gem types, simply make a new pile for that type.

The player now reviews their dice values and matches them to the following criteria:

If there are no Gem types available that match the roll, the player takes nothing.

Collected Gems will count as points at the end of the game, but they can also be used during the player’s turn to influence dice rolls. Gems used are discarded for the duration of the game. They are NOT placed back in the bag.

The game continues with each player taking their turn as described above. When a player draws the last of the Gems from the bag, the endgame is triggered. Each player is now allowed to take one final turn. Players should skip the step that requires them to draw Gems.

After the players have determined their total score, the player with the most victory points wins the game!

To learn more about Dig Down Dwarf, visit the game’s web page at the Game Crafter.

This game smells strongly of Yahtzee. Not a bad thing, mind you, but it will have an uphill battle with those players who don’t like Dice games that are nothing more than “roll-match-repeat”, which Dig Down Dwarf would certainly appear to be. However, there is a bit more thought required by the players on their turn than mindless dice chucking. The available Gems are always changing and a player can spend Gems to obtain an advantage. For the Child and Parent Geeks, I have no doubt that Dig Down Dwarf will be seen as a casual, fast, and fun game. For the Gamer Geeks, the level of their endorsement is going to hinge on the overall depth of the game play. It doesn’t look to be too deep, but we simply won’t know for certain until we get in on the gaming table.

Teaching Dig Down Dwarf is a very straight forward exercise. Simply make certain that the players understand what they are rolling for. From there, the game is pretty easy. You might also want to emphasis that 2 of the 5 Gems can be used during the player’s turn to influence the dice rolls, but at the cost of victory points.

After teaching the game to my two oldest little geeks, I asked them their thoughts on Dig Down Dwarf so far.

Let’s play, indeed, and see if we “dig” Dig Down Dwarf or we find it’s nothing more than a time sink. 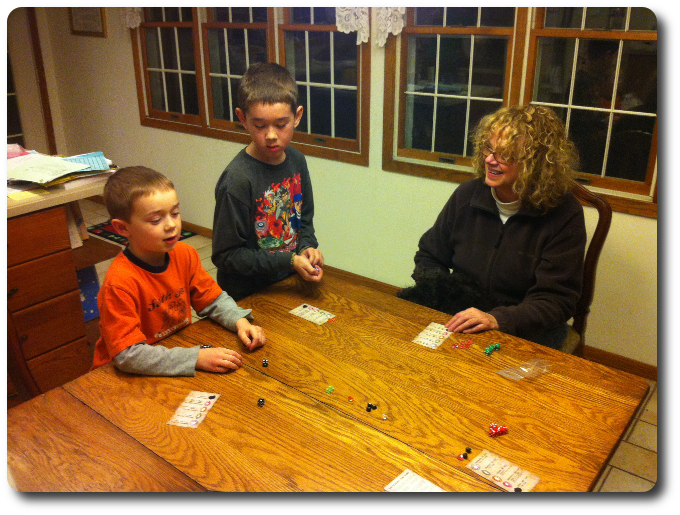 My 6-year-old claims his Gems as his older brother and nana look on. P.S.: I lost this game…badly.

The Parent Geeks very much enjoyed their time with Dig Down Dwarf, finding it to be a casual and entertaining game that was fun to play with their peers and their family. According to one Parent Geek, “What I like about this game is how easy it is to learn and how fun it is to play.” Another Parent Geek said, “It’s better than Yahtzee, that’s for sure. You have to think about what you want to get, which I liked.” All the Parent Geeks found the game to be easy and fast to play, which scored BIG points when they were playing the game in a room with lots of noisy kids. When the dice were put away, all the Parent Geeks voted to approve Dig Down Dwarf.

The Gamer Geeks were mixed when it came to the game’s endorsement. The more casual Gamer Geeks found the game to be fun and engaging, with just enough depth to make it a game worth their time. According to one Gamer Geek, “What I like about this game is that Gems are worth more than points. They are also useful for manipulating dice. A very neat twist to the game.” But not all the Gamer Geeks thought so. According to one Gamer Geek, “All I’m doing is rolling dice and matching them to whatever is available on the table. That’s fun for about 2 minutes and then gets old.” When the games were done and the votes recorded, the Gamer Geeks were split with the more casual elitists enjoying the game and the more hardcore elitists giving it a thumbs down.

There is a small, but growing group of independent game designers that I closely follow. Mr. Glover is one of them. He continues to design excellent and entertaining games that both satisfy and tantalize a large number of our groups. I am, admittedly, a fan and Dig Down Dwarf further strengthens my fandom. I found the game to be light and fun, which is exactly what I am looking for when I want to play a game in the evening with my little geeks. I’ll be the first to admit that Dig Down Dwarf is not the deepest of games, but you don’t have to “dig” to find the game’s entertainment value, either. A perfect blend of well-balanced game play, luck, and reward that has left me satisfied each time I played it.