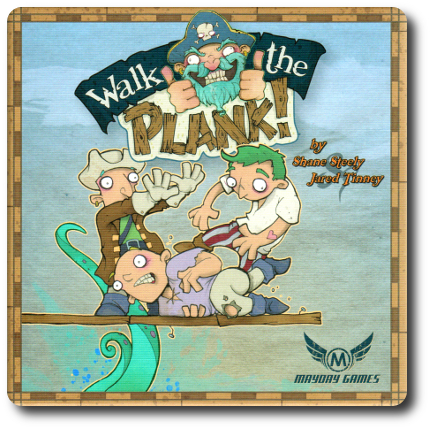 Pirates are brave, laugh at danger, and above all else, follow instructions no matter how insane they sound. The Captain has gathered you on deck. In a loud voice, he explains that he has one too many pirate crew members and is looking to downsize. And by “downsize”, he means toss those pirate he doesn’t think too highly of into the ocean. Time to test your pirate skills and luck!

Walk the Plank!, designed by Shane Steely, Jared Tinney, and published by Mayday Games, is comprised of 1 Ship tile, 3 Plank tiles, 1 Davy Jones Locker tile, 1 Captain’s Favor token, 15 Pirate meeples (3 each in the colors yellow, orange, red, blue, and what is best described as sea-foam green), and 50 cards (10 per player). The tiles and token are made of solid cardboard, the meeples are made of wood, and the cards are made of thick cardstock. Excellent quality and very durable.

Third, hand to each player 10 cards that match their Pirate meeple color. The backs of each of the cards will be one of five different colors and correspond to the Pirate meeple colors (sort of – nothing goes well with sea-foam green). Any cards note selected are returned to the game box.

That’s it for game set up. Determine who the first player is and give them the Captain’s Favor token.

Walk the Plank! is played in rounds with no set number of rounds per game. A single game round is summarized here.

All the players look through their hand of available cards and place 3 face-down. The order in which the cards will be revealed are from left to right from the perspective of the player who is placing them. Players should place their cards in such a way that helps their Pirate meeples survive. Timing is everything in this game, so players should take a moment to consider what cards they want to play and how their card choices will change all the Pirate meeple positions.

Example of some of the cards in the game: Hulk Fist for the WIN!!!!!

A summary of what the cards do is provided here:

Suffice to say, each card moves one or more Pirate meeple towards safety or certain death, but only if certain conditions exists. Since the goal is to keep your Pirate meeples alive and toss your opponent’s Pirate meeples into the leviathan that hungrily awaits at the end of the Plank tiles, knowing when to move and who to move is very important.

Note that a player must ALWAYS take an action with their revealed card if at all possible. This means that a player could unwittingly dunk their own Pirate meeple into the great blue sea!

The Captains’ Favor token is then passed to the next player going COUNTER CLOCKWISE who is still in the game. The next round now begins. 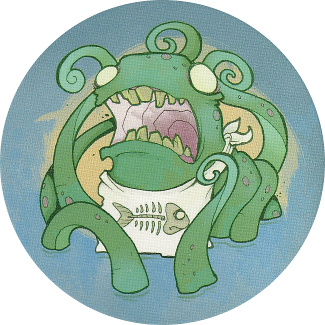 To learn more about Walk the Plank!, visit the game’s web page.

Simple card games always do well with the Child Geeks, but I don’t think Walk the Plank! is all that simple. Players have to think up to 3 moves ahead before they play their cards and must consider what cards their opponents will play, as well. This forces the player to think both defensively and offensively, while simultaneously considering how they will be act and react in future turns. Because of this, I think Walk the Plank! will appeal to the Parent Geeks due to its casual game play and to the Gamer Geeks who will most likely enjoy the game as a filler between more complex games. But it’s the subtle complexity of the game itself that makes me wonder how the Child Geeks will receive it.

Teaching Walk the Plank! is best done by setting up the Ship, Planks, and Davy Jones Locker tiles and a few Pirate meeples. Then I suggest you show how each card works. It’s VERY IMPORTANT that players understand how the cards move Pirate meeples, shoving them left and right. A slight miscalculation can do incredible damage to a player’s turn. Reduce heartaches and headaches by ensuring that all the players understand what the card actions are. Note that the game does require the player to ready, and the game’s level of complexity and thinking 3 moves ahead might be a bit too much for the younger Child Geeks. As always, include your younger players by making them team members. They’ll enjoy the game and the ability to help you win!

After teaching Walk the Plank! to my oldest little geek, I asked him about his thoughts on the game so far.

I agree. Players have to think ahead and plan their card plays by visualizing how the round might play out. Let’s get to the game and see if it’s a great time or we are taking a long walk off a short plank.

The Child Geeks enjoyed the game until the Plank tiles were being removed and they felt like they were being picked on by the other players. They weren’t, of course, but I can see why they thought so. A player could unwittingly have their Pirate meeples in a position where they are being pushed around a lot. Attempting to target a specific player in the game is not reasonable or possible at times. You simply must survive, but at the cost of all the other players losing their Pirates. This creates a very cutthroat environment that some of our Child Geeks didn’t care for. According to one Child Geek, “I feel like I’m being bullied by all these pushy pirates!” But not all the Child Geeks felt that way. The older and more experienced Child Geeks understood how the game was played and did very well. They held their own, pushed others, and rejoiced when they pulled planks out from underneath their parents. When the votes were tallied, the Child Geeks gave Walk the Plank! a mixed level of endorsement.

The Parent Geeks all enjoyed the game. Even the non-gamers liked how the game was played. According to one non-gamer, “This game is a bit hard to understand at first, but I can visually tell what I need to do with my pirates at all times.” Of course, knowing what you need to do and being able to do it are two very different things. A number of the Parent Geeks became frustrated when they were held hostage by their own cards. According to one such Parent Geek, “I am greatly irritated that I am shoving my own pirates into the water, but highly amused when others have to do the same.” Yes, it can be frustrating, but also fun. When the votes game in, all the Parent Geeks thought Walk the Plank! was a game worth their and their family’s time. 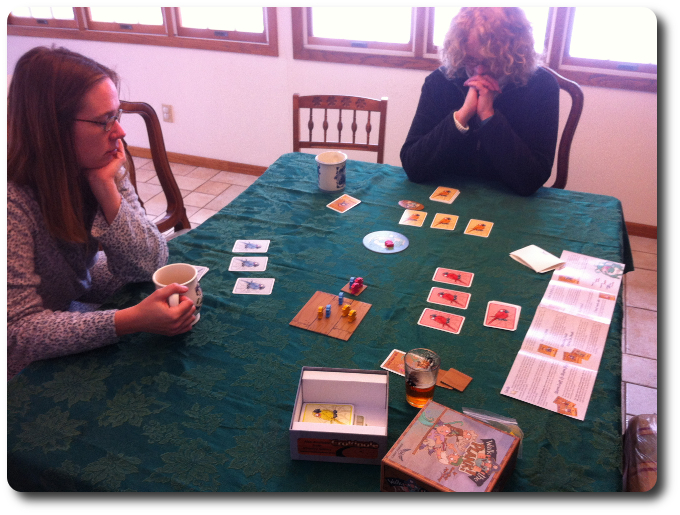 I pause the game for a moment to take a picture – the tension in the air was palatable!

The Gamer Geeks found Walk the Plank! to be fun, chaotic, and a great filler between longer and more complex games. They especially enjoyed the “programming” turn aspect which continues to be a game mechanism widely enjoyed by all who have used it. One aspect of the game that the Gamer Geeks are getting pretty tired of is the Pirate theme in general. “According to one Gamer Geek, “I’ve had it with pirates. They are over played and overused. Game designers need to start using other themes.” Be that as it may, the Gamer Geeks all agreed on two important things. First, the game was fun to play and would serve as an excellent game filler. Second, the replay value of the game was limited. If played only once in a while, the Gamer Geeks didn’t think it would be a problem, but it would get old fast if the game was played 3 or more times in a row. One Gamer Geek stated, “This game is fun, light, and perfect for playing once a month. Tops.” All the Gamer Geeks voted to approve Walk the Plank!, finding no real issues with the game play.

Pirate games are getting a bit stale, but they always seem to appeal to one or more of our groups. I always encourage my group members to evaluate the game based on their personal experience with it and not based on other games like it. Gamer Geeks are notorious for basing a game’s value off the many, many other games they have played in the past. That’s not fair to the game, frankly. That’s like saying all Word games after Scrabble are somehow less important because Scrabble did it first. That’s absurd. There is more than enough room across all the gaming table around the world to fit games that have slight variations on themes and game play. No one game is perfect and there is a game for every player.

Walk the Plank! is a fun and light Pirate themed game. There is enough depth of game play to keep Gamer Geeks mildly amused, but its a game easy enough to teach to Child Geeks and non-gamers without too much difficulty. I’ve heard some say that Walk the Plank! is a “gateway game”, and I cannot disagree. There’s more to this game than meets the eye and will challenge players without breaking them. If you enjoy games where you have to think ahead, like a bit of chaos – and of course, pirates – do look into playing Walk the Plank! when the opportunity presents itself.

One Response to Walk the Plank! Game Review