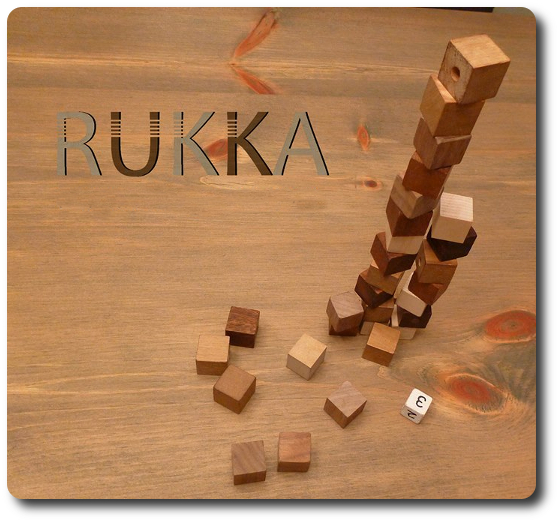 It has been reported that playing with blocks is a great way to pass the time as a toddler and fundamental to cognitive, intellectual, physical, social-emotional, and language growth. All from just stacking blocks. In this game, we return to our roots and blocks, but our ability to be easily amused has since waned.

Rukka, designed and self-published by Stu Wilson, is comprised of 30 small wooden cubes (blocks) and 1 custom six-sided die. The blocks are solid, but not so heavy as to gauge furniture (or small heads of children) when they tumble. The quality of the custom die leaves much to be desired. Ours looked very much like a small cube that had been hastily painted over with liquid Wite-Out. The die does its job, however, so one need not concern themselves too much with appearances.

A Game of Chance and Skill

There isn’t much to setting up the game, other than dumping out the contents of the bag the game is held in. After that, it’s just finding a space large enough to play the game on. Which isn’t much. The game can easily be played on a coffee table, small end table, or a counter top. The key is making certain the playing space is flat and solid. This game requires balance and a steady hand. A tipsy tables will literally and figuratively bring the game to a crashing premature halt.

Rukka is played in turns with no set number of turns per game. On a player’s turn they will roll the six-sided die. Either a number value or the word “Pass” will be rolled. If “Pass” is rolled, the die is passed to the next player in turn order sequence and the current player’s turn is over. Bummer.

If a number is rolled, the player takes a matching number of wooden blocks and either starts to build or adds to a tower. Of course, there are rules to be followed.

As the game progresses, all of the unattached blocks will be used. The players must then take blocks from the wooden tower and add them to other locations, making certain the used blocks do not touch the table and the tower is always taller than what it was during the last turn.

Winning and Losing the Game

The base game is just the beginning! Rukka can be played lots of different ways. I have summarized a number of the game variants provided.

This game variant is as much about precision as it is about speed. Place all the blocks in the middle of the playing area and give the players a count of “1-2-3-GO!” On “Go”, the players grab one block at a time and attempt to build the tallest tower as fast as possible. If the player’s tower crashes, they are out of the game and their blocks are returned to the middle of the playing area. The game stops when either only 1 player has a tower that hasn’t crashed or all the blocks have been used. If all the blocks have been used, the player with the tallest tower wins the game. If only 1 player is left in the game (due to crashing towers), they win by default.

This game variant pits two players against each and challenges them to build the tallest tower. All the blocks are placed in the middle of the playing area and the die is used to determine how many blocks are used per player’s turn. Each player will be building their own towers.

Yes. Chopsticks. Players collect and hold blocks using chopsticks. Not fingers. I suppose you could use sugar cube tongs (if chopsticks aren’t your thing), but that isn’t much of a challenge.

Real simple. Sit down and attempt to build a 30 block tower. Did you do it? Awesome. Time yourself and do it again, faster. Did they all fall down? You stink. Stop embarrassing yourself and try again.

To learn more about Rukka, visit the game’s website.

The Child Geeks enjoyed Rukka, finding it to be a game that they could all quickly learn and play. In fact, what child has not stacked blocks at one time in their very early years of life? That same concept of stacking blocks higher and higher is captured in the game. The only change is the die roll that determines how many blocks can be stacked at a time. But familiarity also brought about lack of interest. According to one Child Geek, “The game is fun, but I don’t know, I don’t want to just keep stacking blocks.” Another Child Geek said, “I think this is a game I would like to play, but then play other games, too.” Even though Rukka didn’t keep the interest of the Child Geeks for more than 2 or 3 games, it was still considered a “very good game” by the group. They voted to approve it, finding it to be good fun for quick games. 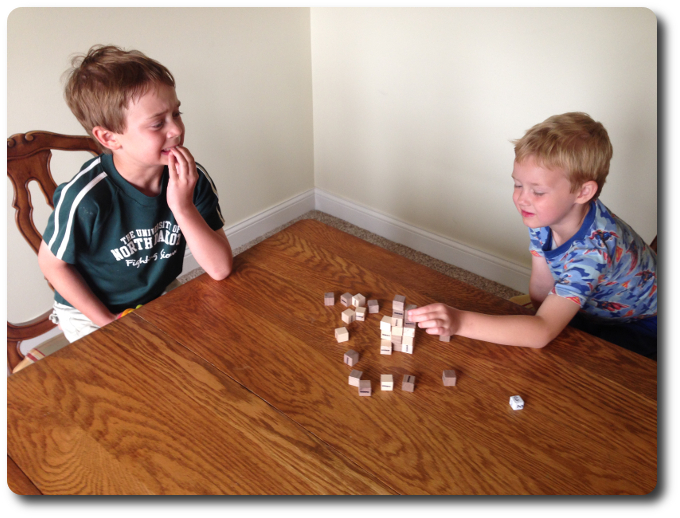 The Parent Geeks were almost identical to the Child Geeks, except they also enjoyed the game’s ability to be played by a large group of people with different gaming backgrounds. According to one Parent Geek, “This is one of those games I know will be a hit at Thanksgiving, Christmas, or any other family gathering. It’s easy to learn, fast to play, and best of all, it’s terribly simple.” Another Parent Geek said, “Yes, I like these kinds of game. Durable, small, and simple. They don’t ask a lot from you, but do require you to focus in and get involved. That’s the perfect casual game.” All the Parent Geeks voted to approve Rukka.

The Gamer Geeks were much less kind to the game than the other groups. According to one Gamer Geek, “What am I? Three years old? All I am doing is stacking blocks! This isn’t a game for an adult. This is a game for a preschooler.” Another Gamer Geek said, “The concept is sound and terribly unoriginal. All players do is stack blocks. Stacking them on the bottom is a waste of time and just makes the game last longer. Better to build the tower as high as you can and as fast as you can. If it tumbles, great! Go play another game.” None of the Gamer Geeks were impressed with Rukka, even when I introduced the game variants. To which one Gamer Geek made the snide remark, “There is not enough alcohol in the world to make this game entertaining.” Rukka didn’t get any votes for approval from the Gamer Geeks, or make any friends.

This is a simple game. A casual game. An easy game. It would also be forgettable if it weren’t for the fact that the game can be played with such a diverse group of players. That’s the real strength of Rukka. Mom, Dad, little brother, big sister, crazy Grandma, and smelly Grandpa can all play this game at the same time. The game itself won’t challenge players too much, but it’s the game’s light game play that allows for breezy table conversation, snacks, and drinks while the game is being played that makes it entertaining.

In short, you play games like Rukka not because they are challenging, but because they enhance the moment. Kind of like mood music, except with game bits. It’s something you bring out to play with friends and relatives because you want some light entertainment while you site at the table. Rukka provides this, but not a whole lot more. It’s not overly challenging and demands almost nothing from its players.

People tend to get somewhat passionate when they talk about the pros and cons of casual games. I, for one, rather like them, but I know many who despise them because they can feel like a waste of time. Which they might be. It all depends on your point-of-view. As for me, I find casual games to be a great way to start and end an evening of games. It’s like the brisk walk you take before and after you run. If a casual game like Rukka sounds exactly like what you were missing, then I encourage you to give it a try.