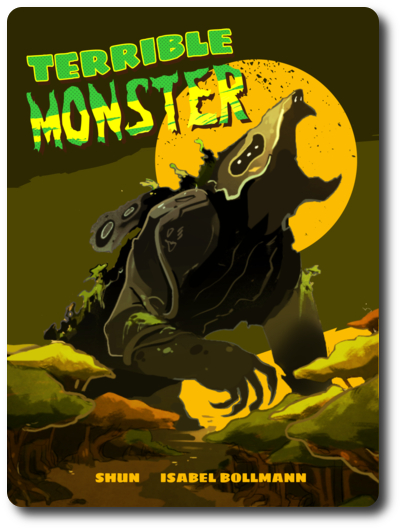 Deep in the jungle, an ancient power slumbers. You know where to find it and are making plans to awaken a creature of terror to do your bidding. You are not the only one with such ambitions, however. Now it’s a race to see who will be the master of the monster and who will be the monster’s lunch.

Terrible Monster, designed by Shun and published by Sweet Lemon Publishing, is comprised of 16 cards, 6 Counter tokens and 8 Life tokens. The cards are as thick and as durable as your standard playing card. The tokens are made of thick cardboard. The artists, Aya and Isabel Bollmann, give each card a distinct look, keeping with the game’s theme while strengthening the narrative.

To set up the game, first shuffle all the cards and deal 5 face-down to each player. These are the player’s starting cards. Players should look at them, but keep them hidden from their opponent until played. Place the remaining undealt cards face-down and to one side. This is the Draw deck.

Second, give each player 4 Life tokens and 2 Counter tokens. These are placed in front of the players and visible to their opponents at all times. The two remaining Counter tokens should be placed to one side next to the draw deck. These side Counter tokens make up the Stock pile.

The Face of Fear, The Roar of Power

Terrible Monster is played in turns. On a player’s turn, they will complete the following steps:

Step 1: Draw and Play One Card

The first thing the player does is draw a card from the Draw deck, adding it to their hand. From the cards in their hand, the player selects to play up to two cards, placing them face-up in the middle of the playing area and resolving them in the order in which they are played. A player can optionally play no cards if they prefer.

If this is the first player’s firs turn of the game, they do not draw a card and only play one card from their hand. On all subsequent turns, they draw a card and can play up to two as described above.

After resolving their cards and any counters, the player ends their turn, declaring it to be over. They must discard down to no more than five in their hand.

The entire goal of the game is to reduce your opponent’s total number of available Life tokens to zero. This is done by playing cards that target and remove Life tokens in play. Some cards are a direct attack, while others allow the player to summon beasts and monsters, controlling these creatures as weapons that also do damage. Some cards stay in the game when played and some are discarded once they are resolved. There are even a few cards that cannot be played unless a specific game condition has been met. 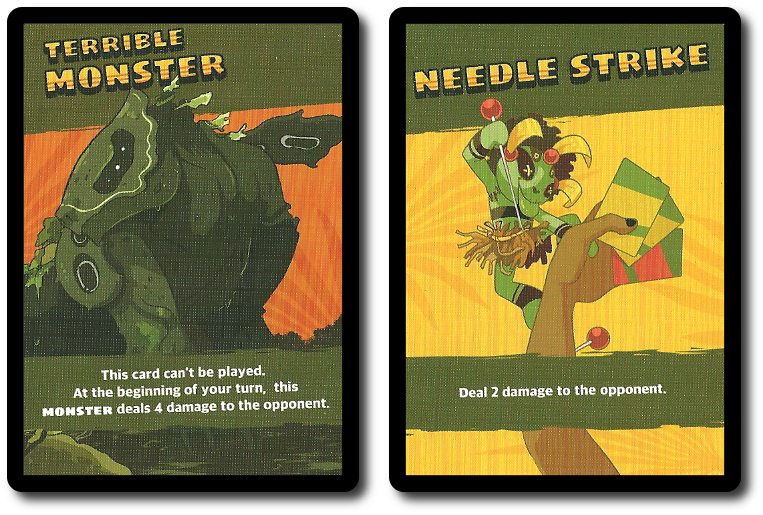 A card played can be countered by the player’s opponent. This is done by the opponent using one of their available Counter tokens, returning it to the Stock pile. The player can, if they like, break the counter by spending two Counter tokens, thus allowing the card’s effects to be resolved. Additional Counter tokens can be earned during the game by playing specific cards. 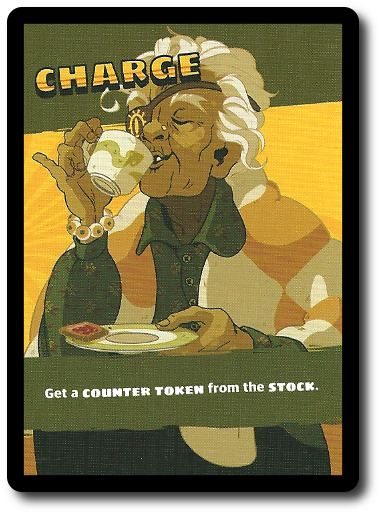 The game ends as soon as a player reduces their opponent’s Life tokens to zero, making them the winner and the new master of the monster. Not so terrible…

A small game expansion, named Desperation, adds additional cards to the deck and introduces Hero cards. The only change to game set up is shuffling the Hero cards and dealing one to each player, face-up. This Hero card can then be used during the game, once per turn, resolving their Hero card’s ability. Counter tokens cannot be used to counter a Hero card! 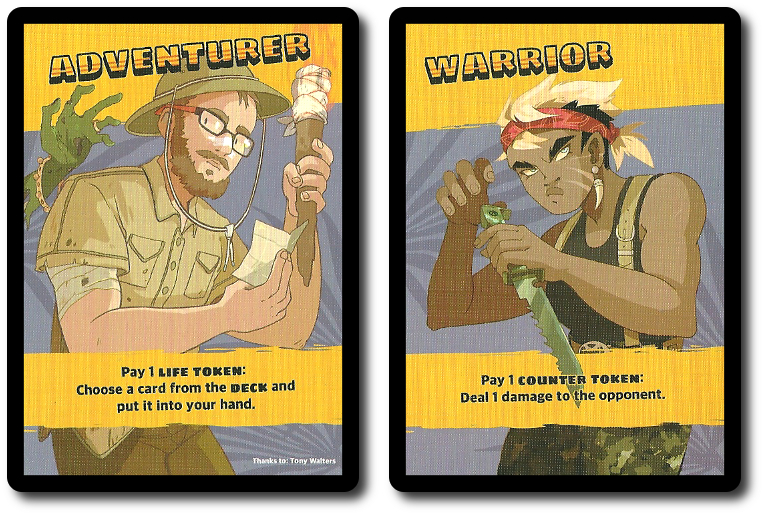 To learn more about Terrible Monster and its expansion, visit the game’s web page.

The Child Geeks had no problems learning how the game was played and got right into it. The game more or less tells the players exactly what they can do, leaving it up to the player to decide when to play the card. This appealed to the younger Child Geeks, as they liked how easy the game was to learn as you played the game, reducing any and all downtime. According to one Child Geek, “I like how fast the game is to play and how you never really know if you are going to win or not!” The game does keep the players guessing, but it becomes more and more obvious who might lose due to the Life tokens being removed. Another Child Geek said, “The game is fast and fun. I even think I’d play this with my little brother, but maybe not.” When the last Monster was summoned and the day came to a close, the Child Geeks all agreed that Terrible Monster was terrific.

The Parent Geeks were not as overly joyed as the Child Geeks, but they found the game to be just as entertaining. According to one Parent Geek, “A tight game, well designed, and it makes sense from start to finish. I just wish there were more cards.” There were several Parent Geeks who felt that there should be more cards, but not because they felt that the game was lacking. They wanted more cards so more players could play. As one one Parent Geek put it, “I like these microgames, but I want to be able to play with others, just not one other player.” While this wish was shared by more than a few, it never hurt the game, either. All the Parent Geeks found something they liked and voted to approve it, finding Terrible Monster to be a game they could enjoy playing with both a younger player and a peer.

The Gamer Geeks were pretty bored with Terrible Monster. According to one Gamer Geek, “I think the game is just OK. It suffers from being a microgame and it never feels like it is anything more than just playing a card and seeing what it does. I never really felt that interested.” Another Gamer Geek said, “Like most microgames I have played, it keeps it simple and laser focused. I thought there was some strategy to be had, but I think you could also just say that it’s all about card timing and having the right card in your hand helps a lot. I’d play this again, but it’s not something I would want to own.” The Gamer Geeks found their first games to be entertaining, but each subsequent game became less and less interesting, resulting in the Gamer Geeks feeling that Terrible Monster, while not terrible by any means, wasn’t that great, either.

Terrible Monster is fast and sometimes brutal. The entire game is focused on timing your cards right and hoping your opponent doesn’t have the card that will kick you out of the game. It can feel a bit one-sided at times, which made several players less than impressed, but since the games are completed so quickly, it never leaves a bad taste in your mouth.

Like most microgames, it’s designed to be quick and lite in game play, but still provide the players with enough meat as to feel like there is something to bite into. Terrible Monster has all this, but falls a bit short of being engaging. The card plays are fast, but the choices to be made are more times than not obvious. This also makes the game play feel a bit too lite, since players don’t have to think through some of their moves. Still, there is a game here to enjoy and there are choices to be made. It can be challenging, especially when playing against another skilled player. Even if you aren’t playing against someone of your game eliteness caliber, you can still have difficultly winning since the cards are always random.

Terrible Monster is not at all terrible, but nor is it over the top terrific, either. It’s a good microgame that does what it was designed to do. It was most loved by the younger and more casual players, while the more hardcore left the table feeling that Terrible Monster let them down. Give it a try and see if this monster is worth hunting.