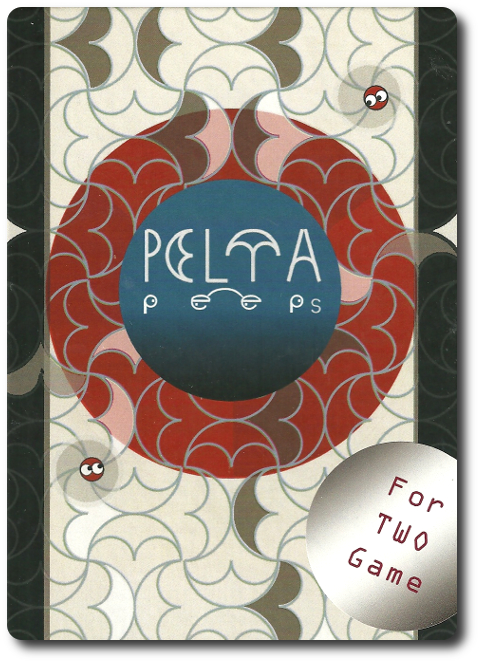 American Protestant clergyman and academic leader, Douglas Horton, said “The art of simplicity is a puzzle of complexity.” We, as a species, tend to over engineer things. We take small problems and create large solutions. The real trick is to solve big problems with simple solutions. Can it be done? This game aims to prove that it can.

PeltaPeeps, designed by Thomas Kite, Samuel Kite and published by Pelta Games, is comprised of 32 pieces (16 pieces per player) or 8 Core pieces and 16 pieces per player if playing a game with 3 or more players (we are reviewing two different versions of the same game here). The pieces of are made of solid plastic and very durable. Artwork (as well as the game’s overall presentation) is very minimal.

To set up the game, first give each player their 16 pieces if playing the two-player game. Players will have the following pieces available to them:

If playing the three or more player game version, give each player their colored pieces. There are no Arrow or Bone pieces to pass out.

Determine who will go first and begin.

Note: The game described here is for two players. For information on games that include more players, refer to the “Game Variants” section of this review.

PeltaPeeps is played in turns and rounds. A player’s turn is completed in two steps which are summarized here. Players are welcome to make “deals” with their opponent, but the rules do not go into any great detail about how this should be done. We allowed the players who helped us to review this game to make deals if they wanted. The large majority did not, which neither hurt or helped the game at the end.

If a player cannot place a round piece, they must first place a Bone or an Arrow piece, creating a connection point. The player then places a round piece.

Most pieces fit together like a puzzle and lock in place with one exception. A Bone piece has a concave side where a round piece can be place to join the two. 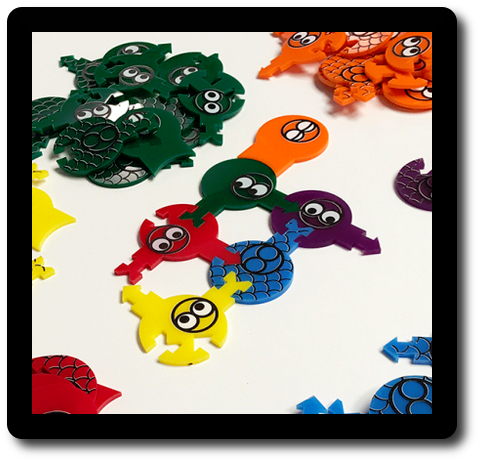 Example of a six-player game in session

The player, after placing their pieces, now can optionally take the second part of their turn or skip it and announce that they are done.

A player can move an opponent’s piece by picking it up off the table and connecting it to another piece already in play. When removing the piece, it must not “orphan” any other piece already in play. That is to say, all the pieces in play after moving and relocating the piece must maintain one solid and connected pattern. No pieces can be left on their own unconnected from the whole. Every piece must have at least one connection with another piece.

Players can never move or flip their own pieces. Additionally, the Immovable Circle of Peltan, once played, can never be moved or flipped. These create “anchors” in the patterns, forcing the players to pivot around them.

This completes the player’s turn. The next player now takes their turn completing the two noted steps above. When both players have completed their turn, the round ends and a new round begins.

The endgame is triggered when any player places their last piece or a player cannot place a piece. If the first player of the round ends the game, the second player can still take their turn. It’s only when the round is finish does the game come to an end.

Players now determine their score by counting the pieces in play and not in play.

Players reduce their total number of points earned by subtracting points associated with the pieces not in play. Some pieces reduces the total by more than others, thus making their placement more of a priority in the game so as not to be penalized by a larger margin at the end.

Depending on the game version being played, scoring is done slightly different.

To learn more about PeltaPeeps, visit the game’s web page. An online demo of the game is available if you’d like to give it a try right now.

The Child Geeks enjoyed the game, finding it fun to attempt to out think their opponent by swiveling and flipping pieces over, adjusting the landscape of the puzzle, creating more and more complex configurations. The goal was always the same, “outlast your opponent”, but each game was different. According to one Child Geek, “What I like about this game is how easy it is to learn. All I had to do is look at the pieces and I was like, I KNOW HOW TO PLAY THIS GAME!” Another Child Geek said, “I like puzzles and this is a game about puzzles. It’s like they threw games and puzzles together and this was the result.” The only Child Geeks who didn’t enjoy the game were those who didn’t enjoy puzzles. Since there weren’t many Child Geeks we played with who didn’t like a good puzzle from time to time, PeltaPeeps earned the Child Geek endorsement.

The Parent Geeks also enjoyed the game, finding the colors and the subtle complexity of the game to be intriguing and easy to approach. The casual Parent Geeks were the most enamored with the more “hard core” Parent Geeks enjoying the game for what it was, but not nearly to the level as the less elite gamers in the group. According to one casual Parent Geek, “I think the game is the perfect blend of strategy and puzzle solving. I like the colors, too.” A more experienced Parent Geek said, “The game is good, but I don’t think I’d play it a lot unless my kids or wife wanted to play. It feels like a puzzle and never really felt like a game to me.” When all the pieces were in their place, the Parent Geeks stepped back and observed what they created. In the end, the Parent Geeks all agreed that PeltaPeeps was a game worth their time, but not all their time.

The Gamer Geeks liked the game component quality but were not overly interested in the game itself. According to one Gamer Geek, “It’s just a puzzle where players take turns building onto it in hopes of skunking the other player. That isn’t very interesting to me.” Another Gamer Geek said, “I think it’s a great game for the kids or those who like puzzles and casual games, but for me, I found the game to be repetitive. Yeah, I had to think about my moves, but I didn’t feel like it was fun.” The Gamer Geeks tried it with their kids (those who had some, at any rate) and found that PeltaPeeps was much more enjoyable than with their peer groups. It did little to save the game from the elitists’ judgement, however. The final vote put PeltaPeeps squarely in the dumps with the Gamer Geeks.

The only difficult and somewhat annoying aspect of this game is the scoring. We referred to the rules many more times than I felt was necessary to determine the correct scoring values. The game comes with a score sheet (attached to the rules, making it necessary to photocopy it), but this proved to be unhelpful other than to serve as a place to record the points. We still had to figure out what those points where. Because the number of points to be scored is not intuitive, the process of counting them feels a bit cumbersome. After playing several games, all the players memorized the scoring procedure, reducing the amount of endgame frustration significantly. To a point where it was no longer an issue, thus the lack of any comments during the final review. Once you clear that hurdle, you simple don’t consider it an issue anymore.

That being said, it’s very important that all players understand how the game is scored before they begin playing. Failure to do so will result in players being fairly fed up with PeltaPeeps after the first game. Unless a player understands how the pieces are scored, the choices they make will be completely based on placement availability, which is not very strategic in the long run when we consider that some pieces penalize a player more than others.

I found the game to be entertaining, but only with my kids. With adults, it just felt like a puzzle and not a lot like a game. Yes, it was a puzzle that constantly changed, and that frustrated some, but from my perspective, it kept the game simply “OK”. I was never not challenged, which was a wonderful thing, but nor was ever really engrossed by it. In truth, I play these games a lot more than a normal player would in a single sitting so as to understand how the game is played and provide you an educated opinion. That could certainly be one of the reasons why the game fell a bit low in my eyes. Needless to say, I kept at it and I never once turned down a game. That’s worth noting.

If you like puzzles and games, than PeltaPeeps is most certainly for you. It combines the complexity of a shifting landscape with simplistic ways and means to influence your opponent. While the game never felt a lot like a game, it kept many of us interested and engaged. For those who like a little competition to go with their puzzle, do take a moment to play a game or two of PeltaPeeps. You just might find it’s the puzzle you’ve always wanted to solve.