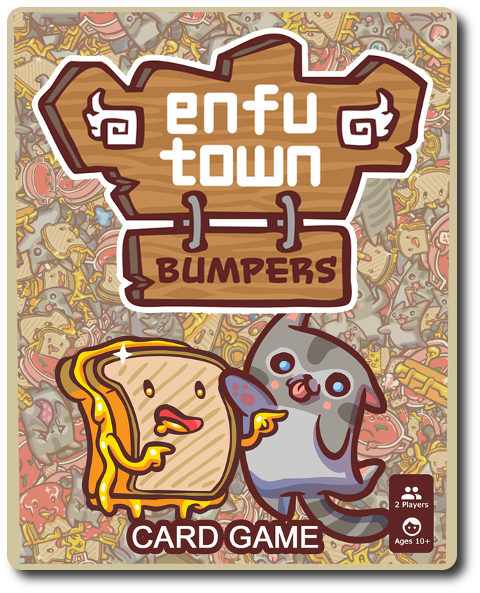 American soldier, William T. Sherman, said “War is Hell.” A sentiment I wholeheartedly agree with. And yet, not every battle results in bloodshed. Case in point, this game. Take to the field and command your forces to win the day! Only one shall rise, the other must fall. Will victory go to an overly optimistic lunch or a dimensionally challenged pussy cat? WE SHALL SEE!!!

Enfutown Bumpers, to be published by  5 Color Combo, will reportedly be comprised of 36 Positive Grilled Cheese cards, 36 Floppy Cat cards, 2 Quick Rules cards, and 1 Grid sheet. The demo we were provided is meant to represent the final base game. As such, we found the cards to be durable and the illustrations to be lighthearted and fun.

To set up the game, first separate the cards into their two primary decks. That being the Positive Grilled Cheese and the Floppy Cat decks. Give one deck to each player and have them look through it, removing and setting aside the “Champion” card. 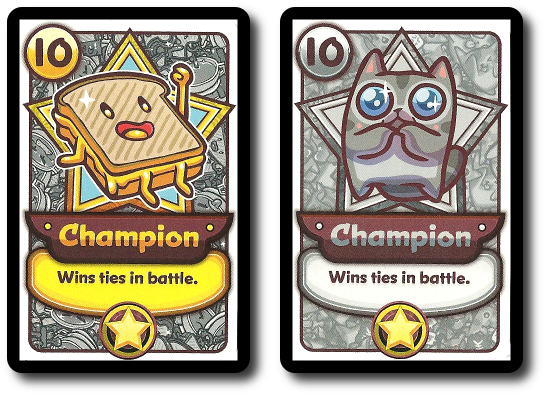 Second, unfold the Grid sheet and place it in the middle of the players. The Grid sheet provides a 3×5 area where the players will be placing their cards. This sheet is not necessary to play, but does provide a helpful visual guide to where cards should be placed during the game. Have each player place their “Champion” card face-up on the starting Grid sheet space directly in front of them.

Third, each player now shuffles their deck and randomly draws 2 cards, placing these cards face-down to the left and right of their Champion. After placing, the cards, the player who owns them may look at the cards, but should not reveal them to their opponent.

Fourth, each player places their deck of cards face-down next to their playing area and draws 4 cards. These cards go into the player’s hand.

What An Adorable Battle….

Enfutown Bumpers is played in rounds and turns. A player’s turn is summarized here.

The first thing a player does on their turn is draw 1 card from their draw deck. This card goes immediately into the player’s hand.

Some of the player’s cards in their hand might have an ability that is triggered when it’s discarded. These are referred to as “Drop Abilities”. The player can play, resolve, and discard as many Drop Abilities as they like from their hand. 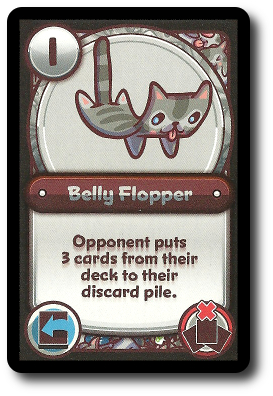 The player may now select 1 card from their hand and place it face-down next to their face-up Champion card. The card must be placed in an empty space that is either above, below, left, or right of the Champion card.

Step 4: Make a Move and Start a Bump

The player may now move any of their cards into an empty space that is either above, below, left, or right of the card’s current position. Doing so will not trigger a battle.

Alternatively, the player may move their card in the same fashion, but into a space occupied by any of their opponent’s cards. This will trigger a Bump.

A “Bump” is a battle, of sorts. The player who initiated the Bump is referred to as the “Attacker”. The other player is the “Defender”. Each Bump is an organized battle that is resolved following a short number of sequential steps, which are summarized here.

The player’s turn is now over. They must discard down to no more than 5 cards in their hand. It’s now the next player’s turn.

The game continues until either a player defeats their opponent’s Champion or a player’s opponent has depleted their draw deck and cannot draw more cards. If either condition occurs, the player wins!

To learn more about Enfutown Bumpers, visit the Kickstarter campaign.

The Child Geeks enjoyed the game, finding it not only to be comical (how can you not laugh at the idea of a flat cat attacking a smiling melted cheese sandwich), but also found it entertaining. To quote on Child Geek, “I like how the game is easy to play, but you also have to think about where you are placing your cards for sneak attacks!” The more experienced Child Geeks enjoyed how the game allowed for some light strategic and tactical thinking, while the more casual Child Geeks liked how fast the games played out. According to one Child Geek, “The game is fast and fun! I think the best part is revealing the cards and everyone is surprised!” When all the games were over, regardless if the cat or sandwich won, all the Child Geeks agreed that it was the game that got the victory trophy.

The Parent Geeks enjoyed playing the game with their family, but not so much within their peer group. According to one Parent Geek, “I think it’s a perfect and much better game of War, that actually requires the players to think through their cards and make strategic plays, but the game itself is pretty simple. A good challenge for my kids and I, but all the adults found it to be nothing more than just playing cards.” Another Parent Geek said, “Great game for the family! I wouldn’t play this game with another adult, however, unless we didn’t have anything else to play.” To sum up, the Parent Geeks found Enfutown Bumpers to be the perfect mix of fast fun and creative thinking, but the game itself didn’t hold their attention if they weren’t playing with a Child Geeks. As such, the Parent Geeks voted to give the game a mixed endorsement, fully supporting it for the family, but leaving it on the shelf when only adults were around.

The Gamer Geeks were not that impressed with the game, but they did acknowledge that the game designers did a good job of inserting as much “meaning game play” as possible in a game that was really nothing more than flipping over cards. According to one Gamer Geek, “There is more to this game than what you assume when you first play it. The different abilities and ways to attack make for some interesting choices. The problem is, that the game is not deep enough to keep me engaged. It’s short enough to make it easy to play, but not nearly interesting enough for me to want to play more than once.” Another Gamer Geek said, “A well-designed game for budding gamers and the casual players, but for me, I say no thank you.” The Gamer Geeks all agreed the game was a good one, but most certainly not for them.

This is a silly game that plays fast and makes you think. Not to a point where you’ll be furrowing your brow, however. Choices are limited to the cards in your hand. This reduces the overall level of strategic depth and tactical foresight, but does leave a lot open to still consider. What the Gamer Geeks didn’t like is that the decision making is pretty much focused on just the next turn, preferring games where you build up to a goal instead of reacting to constant change. The Parent Geeks enjoyed the game well enough, but like the Gamer Geeks, lost interest when playing with other adults. It was with the Child Geeks that Enfutown Bumpers found its true audience and was very much loved.

As for me, I liked the game, and like the Parent and Gamer Geeks, my overall level of interest was directly proportional to whomever my opponent was. That is to say, if I was playing against a Child Geek, I was all in. With an adult or another gaming elitist, I showed little interest. It’s not that the game lacks depth – it’s certainly there – it’s just that it all feels the same after you play the game. Play it several times like we did and you quickly realize that there is still fun to be had, but it mostly is focused on the surprises of the card flops and reveals instead of intriguing game play. Not a bad thing and perfect for keeping younger and more casual players engaged.

Enfutown Bumpers is a good game. It does what it was intended to do, which is to entertain in short bursts. If the game fails, it’s more likely the player didn’t care for the game rather than the game itself being at fault. Like so many other games, subjective reasoning tends to rule the day, but pull back and view the game with a more objective glance and you’ll see that Enfutown Bumpers is more than cute images and fast card plays. Give it a go and see if this game puts a smile on your face as you put the hurt down on your opponent.

Cheesy sandwich for the win!