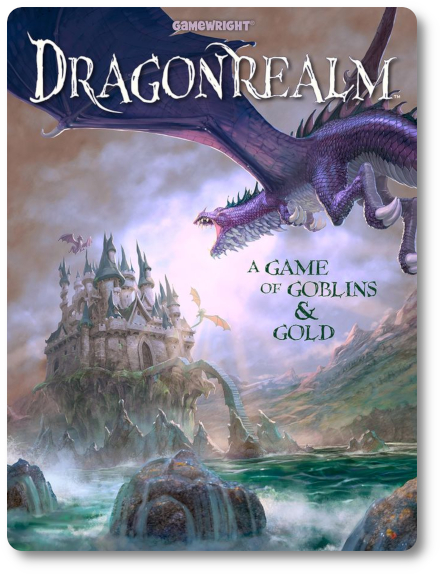 The Roman poet, Ovid, said, “The bold adventurer succeeds the best.” In this game, players will take on the role of brave adventurers who leave the comforts of the local tavern to go venture in dark and dangerous locations. Along the way, they will find treasure and more than enough goblins that are causing mischief. But if the adventurer is bold, if their heart is pure, and those dice do their job, they will return to the tavern with stories to tell and much gold to spend.

Dragonrealm, designed by Darren Kisgen and published by Gamewright, is comprised of 68 Adventurer cards, 50 Treasure coins, 32 Adventurer meeples (in four different colors, eight per color), 21 Location cards, 16 Enhancement cards, six Goblin meeples, six custom six-sided dice, and four Turn Summary cards. The cards are as thick and as durable as your standard playing cards. The meeples are made of wood. The illustrations provided by artist Chris Beatrice are colorful, detailed, and serve to enhance the game’s theme and narrative.

Packing for Your Adventure

To set up the game, first find and place the “Adventurer’s Academy/Adventurer’s Alley” Location card. This is a double-sided card. The “Adventurer’s Academy” is recommended for first-time and younger players. Not because it makes the game easier to win, but because there is less to consider on your turn. Once the group decides on which side to use, place it face-up in the middle of the game playing area. 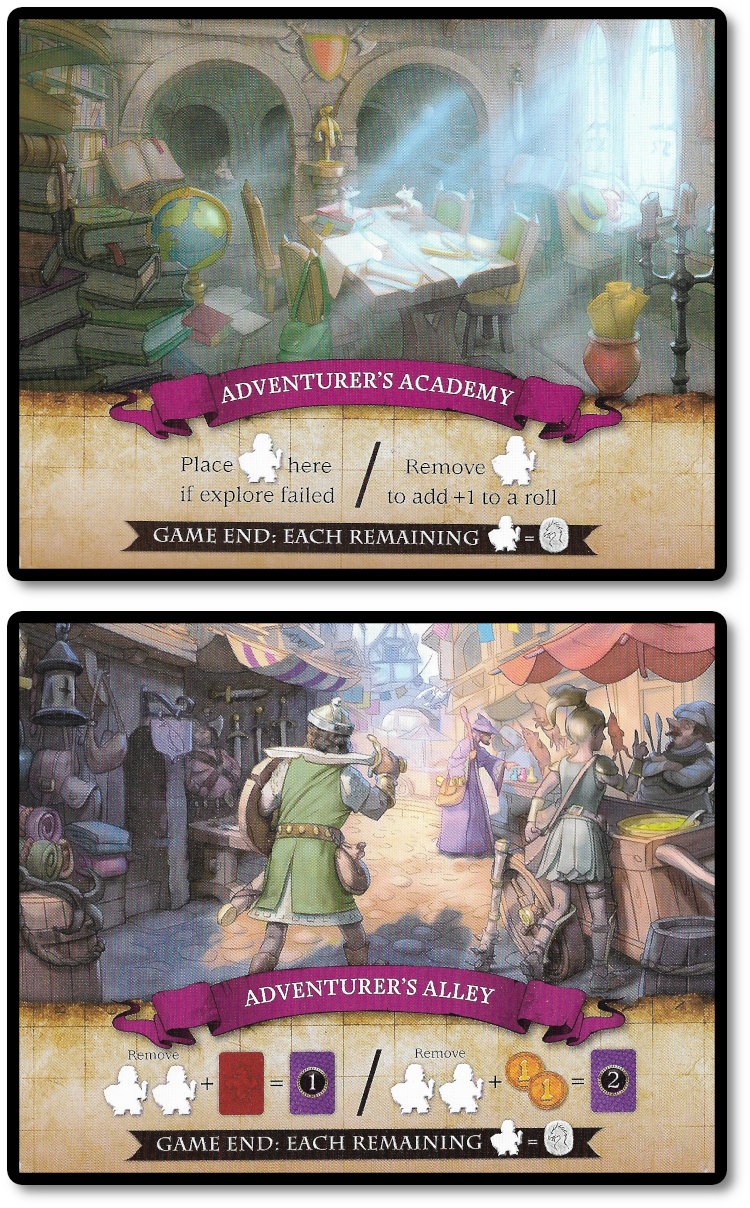 Second, take the remaining Location cards and separate them into four different piles based on the Location card’s color. Shuffle each of these piles separately.

Sixth, have each player select eight Adventurer meeples of the same color and take a Turn summary card. Place the six Goblin meeples to one side of the game playing area.

Seventh, sort the Treasure coins by their value and place in a pile off to one side of the game playing area. Place the custom dice here, as well.

This concludes the game set up. Determine who will be the first player and begin your adventure!

Adventuring We Will Go!

Dragonrealm is played in turns with no set number of turns per game. A player’s turn is comprised of two actions. Only one action can be taken per turn. Each of the available actions is summarized here. 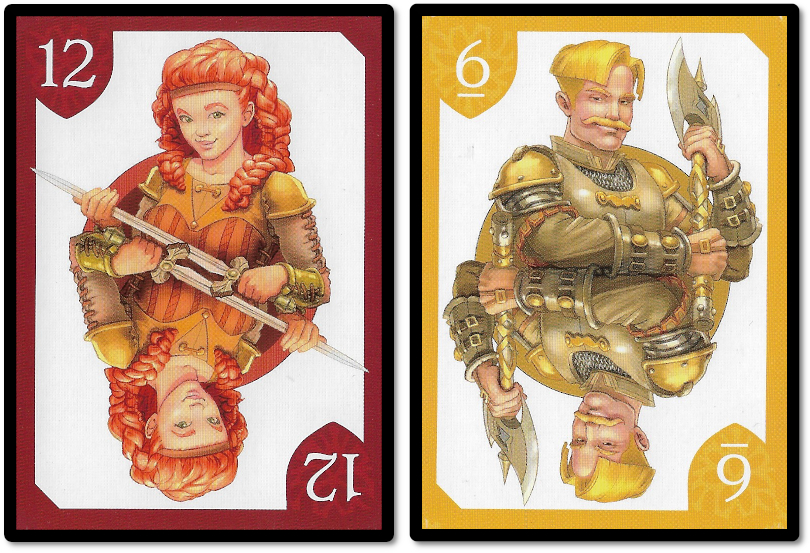 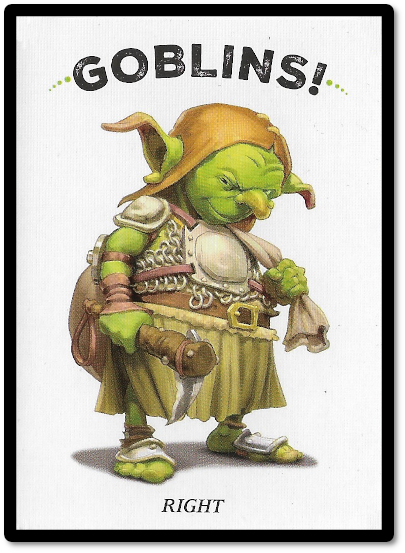 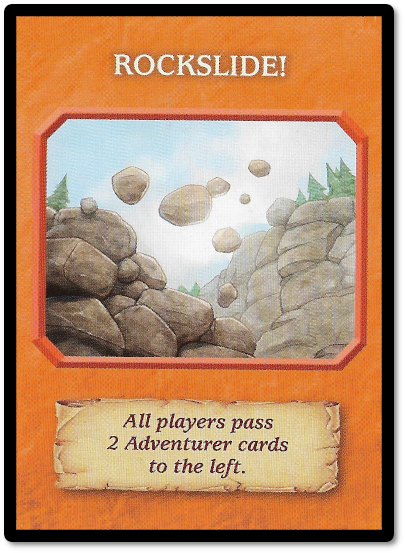 The Explore action allows players to encounter one of the currently available (face-up) Location cards. To do so, the player can either Search, Sneak, or Storm the Location. The player announces which Location card they will visit and using what technique. 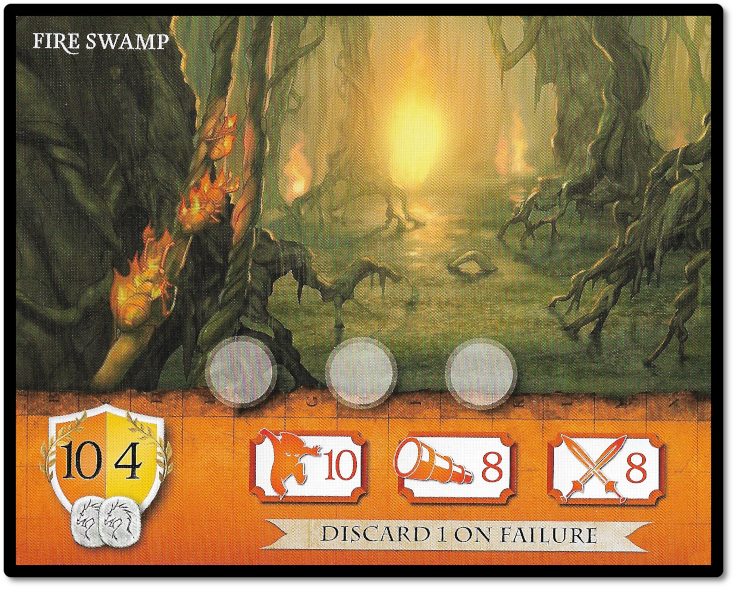 After the player places their cards, they collect a number of dice equal to the number of cards they just played. The dice are then rolled. The sum of the rolled dice is then compared to the Location card, which shows the necessary minimal value for the technique that must be rolled if it’s to succeed. If the rolled value is equal to or greater than what is listed on the Location card, the player succeeds and places one or two Adventure meeples (depending on what technique was used to explore the Location) on an open meeple space. The player then discards the played Adventurer cards and draws one Adventurer card from the Adventurer draw deck (resolving any goblins or rockslides). 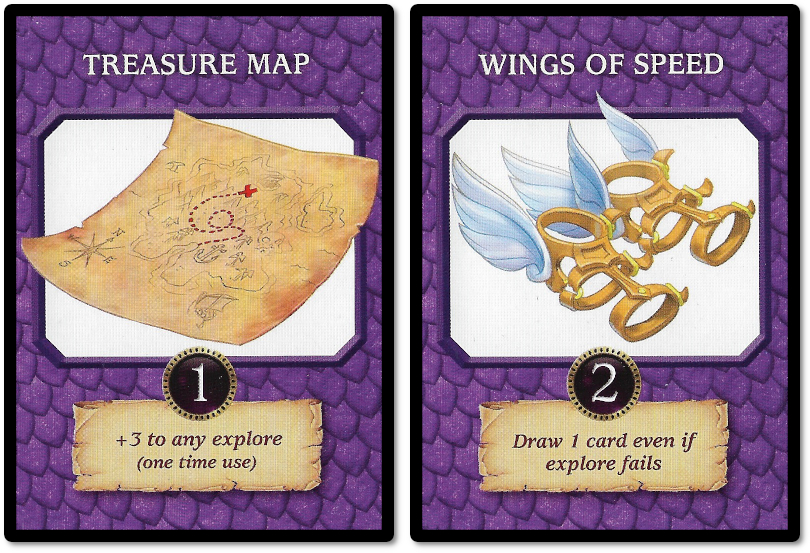 If there are Goblins on the Location, they are considered a “player” when awarding treasure. Whereas a player would collect the Treasure coins, any awarded to the goblins is simply ignored (stays in the piles). Goblins can only ever win first or second place at a Location card when scoring.

If only one player is at a Location card when it’s completed (meaning, there are no other Adventurer or Goblin meeples), that player is awarded both first and second place.

If two or more players tie for first place, add both first and second place values together and divide the Treasure coins between the tied players evenly (rounded down). There is no second-place award for this Location. 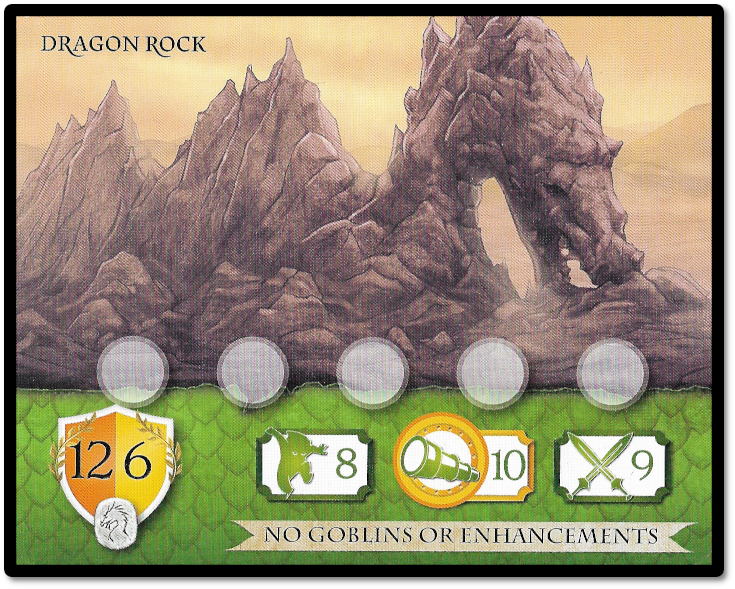 All players now flip over their collected Location cards and add the number of shown Dragonstone icons. The player with the most is awarded five Treasure coins. Tied players get three Treasure coins each.

All players now add their Treasure coins, including any bonus treasure provided by played Enhancement cards. The player with the most treasure wins the game.

To learn more about Dragonrealm, visit the game’s web page.

The Child Geeks has a great time with the game, finding it fun to talk about the different locations and creating stories about them. The game doesn’t give players any background or context regarding why the Location is of any interest to the player, but it’s easy enough to make up a reason. Adventurers, after all, don’t do anything unless there are treasures and glory to be won! According to one Child Geek, “I like this game. I like visiting the different places and figuring out how best to get inside to get the treasure!” With three different ways to approach each Location, players always have options at their disposal, giving players a reason and means to keep exploring. Another Child Geek said, “Love the game! Hate the goblins!” True, the goblins are a real nuisance, which is precisely what I would expect from a goblin. When all the votes were in, the Child Geeks gave Dragonrealm high praise.

The Parent Geeks found Dragonrealm to be an excellent game for the family and a fun game for the adults, as it was simple enough to play and fast enough to keep everyone at the table invested at the moment (read: away from the TV, video games, and smartphones). According to one Parent Geek, “I good game. Visually very appealing and interesting to see how players are taking on different locations. I feel like you are somewhat gambling, which was interesting, and reminded me a lot of Smashup when you are trying to win a base by having the most influence.” Another Parent Geek said, “Really liked playing it with the kids and playing it with my husband. A fun game for the family table.” When the last coin was counted, the Parent Geeks all agreed Dragonrealm was worth every gold coin.

The Gamer Geeks recognized many of the game’s mechanisms and appreciated how tightly it all worked together. They were not fans of the amount of luck that played havoc at times but didn’t think it was a big enough hit to the overall gameplay to make much of a difference when it came to the game’s level of enjoyment. That said, none of the Gamer Geeks felt that Dragonrealm was a game that was for them. According to one Gamer Geek, “A solid family game for younger or less experienced players. A good way to introduce the hobby. But once you play enough and get to know how rich and interesting games can be, I don’t see anyone staying too long in this realm.” Another Gamer Geek said, “Solid. Well constructed. Tight rules. Quick gameplay. All the things that a game should be. Too bad it isn’t geared towards players at my level. But for what it is, good stuff for the kids and families.” Dragnrealm was given a healthy amount of praise, but not the Gamer Geek’s vote of approval.

Dragonrealm is an excellent example of a light game that introduces the fundamental concept of hand and resource management. The game is not complicated or deep enough to keep an elitist engaged for long. Still, for families and younger or inexperienced players just getting into the hobby, Dragonrealm is going to be a real treat. While luck is involved, you can always improve your chances of succeeding. The catch, which will throw players off, is that you can still fail a roll. A player quickly learns to balance their expectations of outcomes with thoughtful card plays. And since acquiring additional cards takes time, players must also learn how risking it all could lead to big rewards or loss of time.

I should also mention, Dragonrealm feels like the big brother of Dragonwood (also by Gamewright). Similar games, but Dragonrealm has much more depth.

For those who are plagued with dice that hate them, the game gives them a road to recovery. Keep in mind that the game does not play favorites, but it does sympathize – greatly – for those who can’t get Lady Luck to play along. This proved to be an outstanding addition to the game rules as it kept a player in the game, even if their adventurer keeps falling and failing to live up to their legend. Since players always have a viable out, the risk is more about losing an opportunity, not an advantage—a great way to keep players in the game without handing them the victory.

Overall, I am most pleased with Dragonrealm. It’s a game – sadly – I will not be keeping in my collection as all my children, family, and friends have long since graduated into the realm of much more complicated games. Dragonrealm, however, is a game I would have LOVED to have in my collection as little as five years ago. Lots of replayability with a smooth learning curve and engaging gameplay that keeps the player involved. Great stuff for families and new players to the hobby. Do go adventuring with Dragonrealm if the opportunity presents itself. It’s a journey you’ll enjoy.

One Response to Dragonrealm Game Review