When Do You “Geek” Your Little Geek? 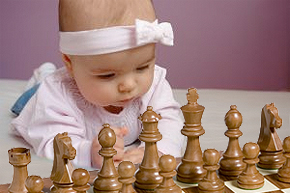 Ashley from somewhere in the US writes…

Obviously this is a partly subjective question, more curious on when the Father Geek staff started introducing their little geeks to games and what kind of games should one be on the look out for for when that time comes.

Thank you so very much for your email, Ashley!

The moment I knew my wife was pregnant with our first little geek, I started to play board and card games on her belly. It was my hope, through the process of osmosis, that my unborn child would begin to absorb essential geek skills and, once born, would immediately engage me in an epic game of Risk.

Of course, none of this is true. You can’t play a game on a pregnant woman’s belly. Believe me, I’ve tried, but the contours of the abdomen region and the baby occasionally kicking and upsetting the board pieces was troublesome. Only took me a few times of resetting the board after the baby kung fu kicked his mother before I begrudgingly went back to the kitchen table with my games.

For the sake of this conversation, let’s assume by “games”, what is actually being discussed has boards and bits and not the early interactive games you play with little geeks like Patty Cake and Peek-A-Boo. As such, there is no real “time” to introduce games of the boards and bits variety to your little geek. However, I personally believe three things are mandatory before you start to introduce any game. Opinions on these points will wildly differ, I am sure.

First, the parents must have a lot of patience. Even the most simplistic of games will not be learned in a day, possibly even several, depending on the child’s ability to grasp the game’s concepts. But a parent who is consistent and sticks with it will begin to reap the benefits. You must start small and gradually build on the little geek’s experience. Rome wasn’t built in a day, is neither is a Geek.

Second, the child must be mature enough to listen and sit still, even if for only a little bit. If not, any game that requires them to sit at the table or on the floor for any length of time will be tricky to teach, let alone play. They will want to go run and do something else. This is where the parent’s patience will be needed and tested. If the child doesn’t want to learn the game, do it another time when the child is more willing to sit and be still. Don’t try to push this as such actions will be met with sour faces.

Third, the child must have the basic ability to communicate with the adult and the basic grasp of whatever mechanic is being used in the game in order to play as an independent player. This is where the suggested age range on a game box will help you. You can make some basic assumption on what skills will be necessary based off the minimum age suggested. If you read the back of the box or go to Board Game Geek, you can get even more information about a game and see what skills are necessary. You can even go to Father Geek’s game review index and sort the games by age range if you like.

Let’s put these three things into practice with some simple examples.

The first game I taught my oldest son at age 3 was Slap Jack. This is a simple game that requires the players to physically slap their hand on a card if it is the “Jack” in the deck. I would deal the cards, show my son what the “Jack” looked like and explain the game rules. We’d then play and I would guide my son through the entire game, telling him when he should or should not slap, asking him questions, and really engage him in conversation. My son was a bit ahead of the curve in regards to speech, so we actually could have a pretty good talk. At age 3, my middle little geek didn’t have an easy as a time and required a bit more “hands on”. I haven’t even tried it with my 1 year old yet.

Candy Land was also a great early game to play with my little geeks starting at the age of 3 and 4. In fact, you can’t go wrong with the classics such as Hungry Hungry Hippos, Hi Ho Cherry-O, Candy Land, Chutes and Ladders, Old Maid, Slap Jack, and Go Fish. There you go, that’s seven games right there and they all use slightly different geek skills but the games themselves are not terribly rules heavy. Going forward, you’ll know what games your little geek enjoys, where their geek skills are at, and be able to identify games they might enjoy.

More important than the game, though, is the time you get to spend with your little geek. I play games with my kids not only because I am a fan of the hobby, but also because of the fantastic quality time I get to spend with my sons. I know other fathers hunt with their kids, work on cars, play video games, and fish. These are all fantastic and worthy ways to engage and spend time with your child. Board and card games are just another medium and a fun means to an end.

Do try the games I mentioned above and keep at it. In no time, you’ll be playing Risk with your little geek and they’ll be the ones to seek you out to play games. Hopefully, and as planed, for many, many years to come.

One Response to When Do You “Geek” Your Little Geek?