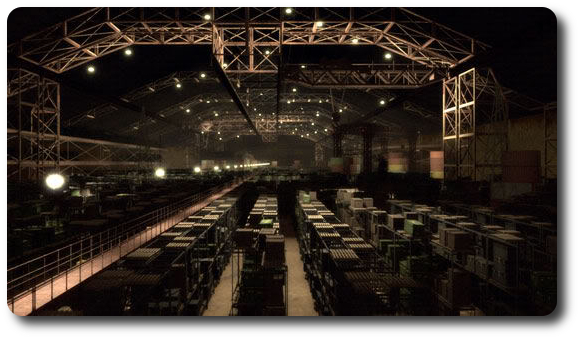 What is the best way to store games (the game, not the bits inside)? I have tried to keep them in the boxes and have long since stopped trying to keep the inserts. Man, those things are nothing but trouble.

I have one friend who keeps everything in plastic tubs and then labels those. When I go down to his “game room”, it is wall to wall plastic! While it keeps everything in one place, I don’t like the fact I can’t look at the game titles. I should also mention I only have access to a 14′ x 14′ space (all the wife would give me) to keep them.

What should I use? Shelves? Stack the games vertical? Horizontal? What’s worked for you?

Thanks, Bob S., for asked us about how we store our games! While all you have available to you is a 14′ x 14′ space, I must say that a room that size is more space than I have available! Nonetheless, I manage to store the better part of 260 games in that smaller space. This is possible by being selective and organized.

When I say I store the “better part” of 260 games, I don’t mean more than half. I mean I store the better games in that space. A sizeable portion of my collection isn’t actually mine, but instead are games that my wife has left over from teaching preschool, or are games our son has outgrown. Those games are moved to other areas of the house, primarily the attic. I have selectively kept those games away from mine; no one plays them at this point anyway. Smaller card games go in a drawer. If we didn’t have an attic, or some other similar storage space, I would probably be campaigning to get rid of them entirely. In other words, just own and store the games you really want if your space is limited.

As a side note, my wife doesn’t like seeing a “wall-o’-games”, so you can see there are books and the like interspersed. Without those, all 260 would probably fit. 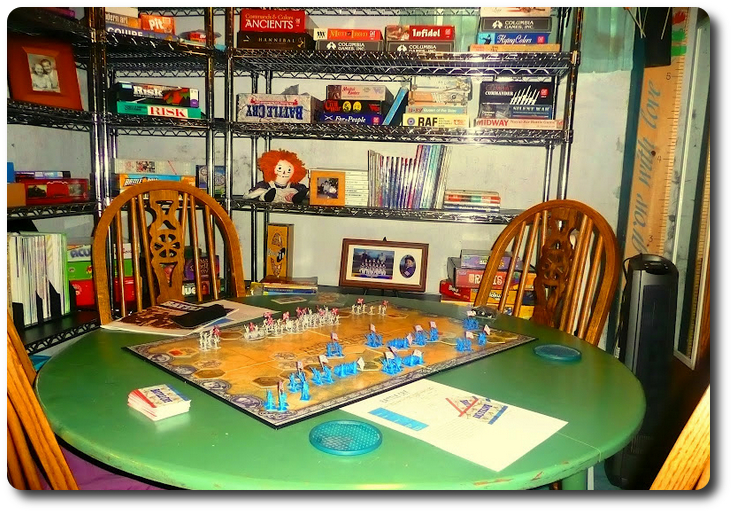 While your friend, Bob, uses plastic tubs to store games, I agree with you that it is nice to see the game titles without having to take down stacks and open the tubs. I use metal shelves, as you can see by the picture. These are nice because they come with wheels, so they can be moved around as needed. I store my games horizontally, so that I don’t have to worry about them falling off the edge, and they are easier to read. I know there is a theory that storing games vertically on shelves helps prevent dishing in the box lid, but I would be more worried about boards bending from their own weight in the box if stored vertically.. The important part is to space the shelves to fit appropriately, regardless of your orientation. I try not to store more than three boxes high on any one shelf. For more details on my shelves, you can check a previous article I wrote: Take this game and shelve it!

My game space also includes a table, which isn’t my main gaming table, but is very nice for leaving solo games set up over a period of several days. If your space is 14’ x 14’ and doesn’t have to have a table, it’s possible to have the shelves not only along the walls, but also sticking out from a wall to create aisleways. This would allow use of the center of the room for storage but with full access to any game.

“I store my games in their original box and put them on their sides or on their back (depending on their size) on a big bookshelf I have in my office. I shouldn’t have to tell you that there is limited space on a bookshelf, however. To maximize my space, I condense games in their box by taking out inserts and putting everything in plastic bags. For game expansions that come in big boxes, I pull out the game bits and attempt to store them in the original game box, too, placing the empty expansion box in a small closet. For small dice games (like Farkle), card games (like Monopoly Deal), and other small games, I store them in boxes I purchased at IKEA, making them easy to find and to store on a shelf. Lastly, for those games that come with many bits (like HeroScape and Descent: Journey’s in the Dark), I put all the pieces in plastic tubs that are large enough to store all the bits. The tubs are placed in the same closet as the empty expansion boxes. All family and little geek games are on shelves in our living room/play room and easily grabbed and played with (but hardly ever put away).” 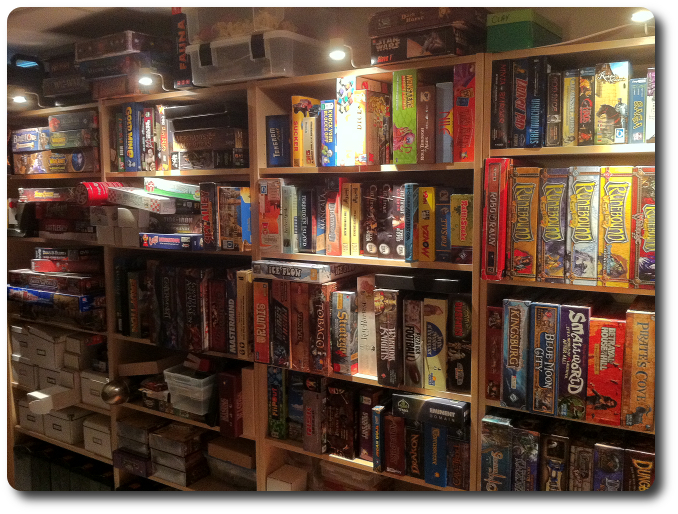 Cyrus's Space: Less organized but easy to find and adjustable

Of course, the option preferred by evil geniuses everywhere is to get your spouse hooked on gaming, so that “your space” becomes “our space”, and grows accordingly. Mwahaha!

In the end, I am not convinced there is a “right way”. Everyone stores games a little differently. There is whatever style fits you, tempered by what’s possible and practical. Which begs the question of whether owning 260 games is practical, but I will leave that to the philosophers.

In summary: Give it some thought, don’t rush, and it will come.

Agree? Disagree? Write your comment below or send us your own question for us to ponder!