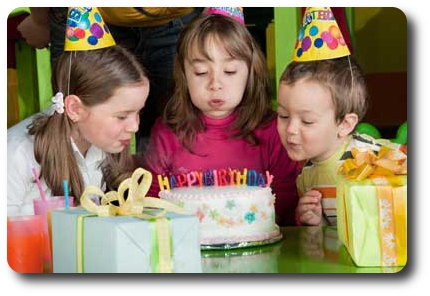 Peter K. writes to us via Google+ asking…

Any thoughts on what some good party/board games would be at a Birthday Party for a 7-year-old and a group of about 8-10 kids? I was thinking some of them will play Pokemon but I wanted to cover the others.

Yes, sir, I have a few suggestions for you!

Keeping the little geeks focused is a must and almost impossible (especially if there is sugar in their small bodies). With this in mind, we must limit the games to something that is not too difficult nor too simple. It also needs to be fun for everyone, be they actively doing something in the game or just watching. Downtime should also be dropped to a minimum. Given this, here are a few games you might want to consider. I’ll name the games and provide our reviews. The games are pretty straight forward and you should have no problem making your own version of the games (based on our description of how the game is played) if you cannot get a copy of the game in time.

So, in no particular order other than the way my brain dumped them on this article, here are some suggestions.

Reverse Charades – Just like charades, but the entire team tries to act out the word and one person on their team tries to answer it. This is a great deal of fun for the people acting, guessing, and just observing! A junior edition of the game is also available, but the topics and words in the original game are not terribly complicated. Simply help the little geeks with a word or draw a new one if too complicated. For example, you might one to redraw a card if the word they need to act it out is “space-time continuum”.

Who Would Win: The Ultimate Celebrity Showdown – Debate which celebrity would win in a random event! Two people get in front of the group and champion one randomly selected celebrity and then argue why their celebrity would win against (or is better than) the other person’s celebrity at completing a randomly selected event. Then the group listening gets to vote! Imagine, if you will, Mr. T. vs. Darth Vader in a hot dog eating contest! Some of the celebrities will be unknown to the little geeks (and to the parent geeks), so simply pick a new one if everyone is scratching their heads. If the little geeks are big on Pokémon, have one of the players champion Pikachu and the other Optimus Prime in a battle of who would make their bed faster! The smart money is on Pikachu….

Befuzzled – A game where memory and laughter go hand in hand. Cards with shapes are placed in a central playing area and then a random action is attached to that shape. All the players read the actions and do the best they can to remember them and the shape associated with it. A player then draws a random card with the shape on it. The first player to act out that action wins the card! For example, the first person to quack like a duck! Expect a lot of chaos and laughter to subside before continuing with the next card. Silliness will ensue.

Cranium Brain Breaks – Very simple and fun 1 minute games for teams. This game is rather new (easy to get and available in “big box” stores like Target and Wal-Mart) and plays just like the classic party game Cranium. However, the activities the groups have to perform are randomly selected and must be performed in a minute or less! Lots of variety and lots of fun in this game which will make it very interesting for the little geeks and keep their attention.

Another thing to consider is your play space. The games I suggest are great for a party room and should accommodate the party size you are looking at hosting, which I must add, is very brave of you. I hosted a party for my oldest little geek this summer with 11 little geeks in total! At the end of the day, my wife and I just collapsed on the couch and fell asleep. Great party, but HOLY COW, they are a lot of work! So very worth it when you see how happy your little geek is, though. And let’s not forget how great a midnight cake run to the fridge is.

On a related note, I need to lose weight.

I really hope this helps! Best of luck to you and a very HAPPY BIRTHDAY to your little geek!