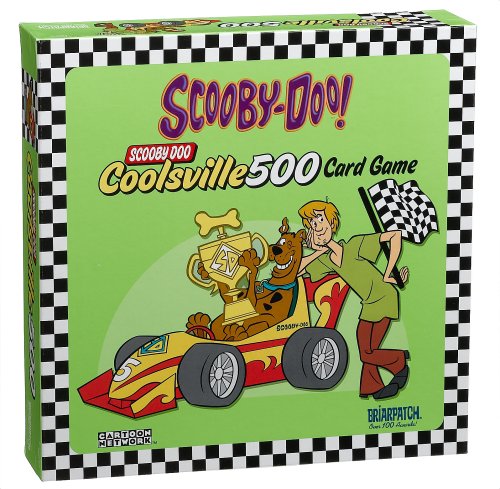 In Scooby-Doo! Coolsville 500, players must do their best to take the lead and stay ahead of the competition, but must also make certain to not over extend themselves or they will be forced to pull aside and watch their competition zoom by. This is a great little geek game that starts to teach the basics of card hand management and out thinking the other players. There is surprising depth to this simple game that makes it enjoyable for older geeks, too.

This game is comprised of 1 game board that represents the racetrack, 1 scoreboard, 48 playing cards, 4 game tokens (with bases), and 4 lap counters. The playing cards are big, making it easy to grab for little hands and colorful with illustrations of the Scooby-Doo gang. The game tokens and lap counters are made of thick cardboard and very durable, as is the score board. The game board that represents the racetrack is colorful with big numbers, making it easy to read, but the game board itself is a bit thin. Still usable, but not as durable as the rest of the components.

To set up the game, place the game board (the racetrack) in the center playing area and the scoreboard off to one side where all the players can see it. It is recommended that one player or two players sitting next to each other manage the score board for themselves and all the other players. All the players then select one of the four game tokens which are cardboard cutouts of one of the Scooby-Doo gang and (of course) Scooby-Doo in a race car. Each player also selects the matching lap counter (picture of the driver of the car that matches the car color) and places it next to the scoreboard. Finally, the deck of cards is shuffled and each player is dealt one card. The player with the highest card is the starting “Dealer”. All the cards are reshuffled and the Dealer passes out 5 cards to each player, face down. After the cards have been passed, the remaining cards are set aside to be drawn from, each player picks up their five cards, and the game is ready to play.

If it is not readily obvious, the goal of the game is to be the first player to win the race by completing five laps around the race track, crossing the finish line ahead of the pack. In order to do so, the player must win “heats”, which is represented by playing a number of card hands. This game is, essentially, a lot like Hearts or Spades, but not nearly as complicated (which is not to say Hearts or Spades is terribly difficult, either). However, for a little geek “trick taking game”, the mechanics are simple and yet still provide an entertaining challenge.

To play, the Dealer selects one of their cards and places it in front of them, face up. This is the lead card and all the other players are trying to beat it with a card in their own hand. The player immediately to the left of the Dealer (and all players after), can choose to play one of three ways.

All players play one and only one card. Once all the players have played a card, the highest trump wins. If no trumps were played, the card with the highest value that matches the lead card color wins. The player who played that card collects the cards played, discards them from the game, and draws 1 card from the draw deck. This player then selects one of their cards and places it out in front of them starting a new hand.

Game play continues until all but one player is “out of gas”. A player is out of gas when they can no longer play cards (i.e. out of cards). Recall that only the winner of each card hand gets to draw a single card from the draw deck.

The last player to have cards in their hand is the winner of the heat and places the cards left in their hand in sequential order, from left to right, largest number value to the smallest number value. Starting from  the “starting line” or wherever their game token currently is on the race track, they advance their game token to the number value shown going clockwise. Then they advance to the next number and so on until they have moved for every card. Every time the player crosses the finish line, advance their lap counter 1 space. If one of their cards has a value of zero (also called “Pit Stop”), the game token advances to the nearest (again, going clockwise) pit stop. When they leave the Pit Stop, they will exit from the opposite Pit Stop area.

Any player who ran out of gas moves their game token to the nearest Pit Stop (in either clockwise or counter-clockwise direction) and does not collect any laps.

Once the winner of the heat has finished moving their game token on the score board and all the other players have placed their game tokens in the closest Pit Stop, the player who won the heat is the new Dealer. Again, the Dealer shuffles the deck and passes out five cards to each player and game play continues as described above.

The game is played until one of the players completes five laps and is declared the winner, given a trophy, a kiss, and possibly a TV dinner with that awesome cherry dessert that is crazy hot when it comes out the microwave. What is that thing? Cherry lava? I don’t know, but I love it despite the third degree burns I get in my mouth when I eat it.

This game should be a winner through and through. First, it has Scooby-Doo, which my kids love. Second, it is a race game, which they also love. The only part of the equation that might not go in a positive direction is the game play itself. Specifically, the trick taking. Because of the limited number of cards, and the fact that individuals who loose tricks have a reduced hand (making it all the more difficulty to play), I fear my little geeks will quickly become exasperated with the game and walk away. But you never know…

After explaining the game, showing several examples of how to take tricks with cards, we were ready to play. Only my oldest  little geek (Liam, age 6) wanted to play the game and he had this to say:

“The card playing looks hard, but I think I can figure it out.”

And I’m sure he will, but will he do it before I cross the finish line? Drivers, start your engines!

When it comes to race games, it is very easy to see where you stand in regards to winning or loosing the game. This makes it easy for the more advanced player to adjust their strategy to attempt to make up for lost time and ground, or keep the lead. However, it also shows just how far you have been left behind. The perceived distance and difficulty can be something of an emotional kick in the teeth if you are a young little geek. This is especially true if you cannot seem to get the upper hand and catch up with the pack.

My oldest little geek played as well as he could. He took several tricks in a row and was able to keep the lead, but it was only a matter of time before he lost control of playing the lead card. When that happened, he had a very hard time taking it back. For the most part, when we discussed it later, he was playing cards on a reactionary level instead of using some basic strategy and card hand management to strengthen his next play. Not surprising, as this is something you learn after playing a number of games. For example, when I first played Hearts with my wife (who is frighteningly good at the game, by the way), all I did was try to take tricks, but always lost because I didn’t work on my card hand management and watch how the other players were playing. Lesson learned, but only after many games. Yes, I am a slow learner.

Despite the fact that my oldest little geek lost, he still enjoyed the game. This is because the game is fast. Very fast, in fact. You can go through a single heat in just a couple of minutes. Longer, of course, if players want to really think about what cards they should play. I gave my little geek all the time in the world, but he still rushed it. In hindsight, I should have slowed him down, but he (and I) were caught up in the fun of the game.

This game is best played with 3 to 4 people. Playing with 2 players can quickly make the game one-sided. I look forward to getting this game on the family table as soon as possible and get my wife and mother to play, too. Should be a much more entertaining game with four players jockeying for position and laughing loudly.