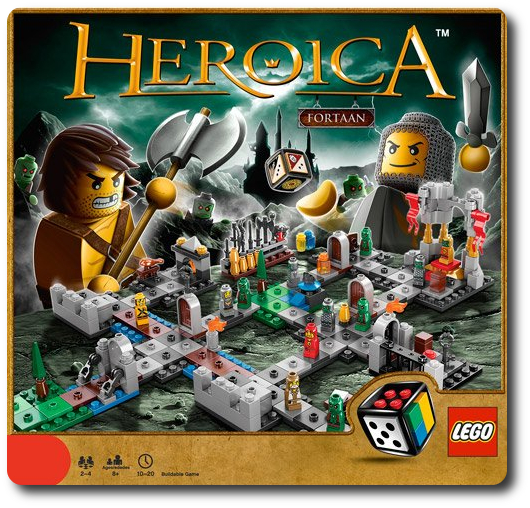 Help, my Lord! The Castle Fortaan has fallen to the despicable Goblin King! He and his minions now control the castle and all of its riches! If you and your brave heroic friends would dare to reclaim the castle, I can promise you legendary fame and fortune! Go now and rid us of this goblin plague! Arm yourself with cunning, skill, and weapons of great might! The road will be long and dangerous, but a hero craves such things!

LEGO Heroica: Fortaan, released in 2011, is part of the LEGO® Heroica™ family of modular roll-and-move dungeon-crawl games. In Fortaan, the players take on the role of mighty heroes storming a castle that has been conquered by the goblin horde. The other titles in the family of LEGO Heroica games have similar fantasy themes, but different pieces to create very different layouts. All the Heroica sets can be combined to form one very large LEGO fantasy world.

The board is made up of LEGO, of course. Each mission (three are supplied with the set, but you can make up your own) has a different map layout complete with enemies and treasure, as well as a specific objective for ending the mission. Apart from the pieces making up the map, the other components include hero and monster figurines, health and gold tokens, potions, treasure chests, keys (to unlock doors), weapons and the six-sided customizable LEGO die. 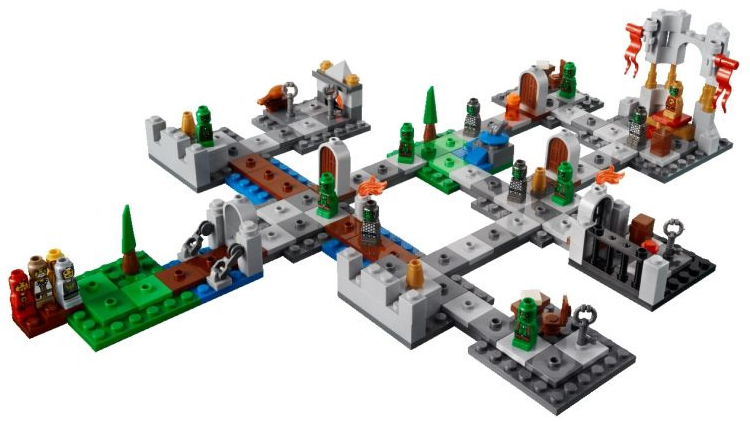 First, build the course. Typical LEGO building and a fun exercise for you and the family.

Second, each player chooses one of the heroes (barbarian, wizard, druid or knight) and takes 4 Health tokens. The hero figurines are placed on the designated starting space (determined by the mission). Players then take turns rolling the die, allowing them to move 1-4 spaces to an unoccupied square, collecting any gold, keys, or potions on the way. Combat occurs, and movement ends, as soon as the hero figure moves adjacent to a monster figure. Combat is resolved by rolling the die again and this will determine whether the monster is defeated, the hero is injured, or sometimes both!

If the hero moves onto a treasure chest, movement also ends immediately, as the hero is unable to resist the temptation of opening the chest. This is resolved by rolling the die (surprise, surprise!) and, depending on the roll, the hero may find gold, be injured by a trap, or both.

One of the LEGO die faces has a Heroica Shield symbol. If a player rolls the Heroica Shield for their move or combat, they have the option of using a special skill according to their hero’s class (for example, the knight may move up to 2 spaces and instantly defeat an adjacent monster) or activate a skill enabled by a weapon the hero has purchased (for example, a sword allows the hero to move 1 space and instantly defeat an adjacent monster). All weapons cost 3 gold if a player wants to purchase them to outfit their hero in style.

A locked door can be opened with a key, or can be bypassed if a hero rolls the Heroica Shield. Is there anything this Shield can’t do?

If a hero loses all their Health tokens, they are defeated temporarily. On subsequent turns, the player rolls the die for restoration of health rather than movement. This continues until health is restored to full, allowing the hero to continue the quest.

The first player to complete the mission objective is the winner. More than one mission can be played sequentially as a campaign. Campaigns are referred to as “Epic Heroica”.

My 7-year-old son requested and received this as a Christmas gift. He and my 6-year-old daughter have enjoyed playing this as a web browser game. The advantage of the box set is the hands-on experience of assembling the game board, and how many children, especially boys, don’t like LEGO? So there was never any doubt that my children would enjoy this game, and when my son, grinning broadly, asked me to play, there was no doubt in his mind that I would love this game, too.

For a change, I did not read the rules of this game, trusting my children to teach me based on their online web game playing experience and their own reading of the rules. Once I realized this was a basic roll-and-move affair with a couple of ornaments thrown in to enhance the dungeon flavor, I knew that this was not my cup of tea, but at least it seemed to be mercifully short.

I played a campaign of three missions culminating in the glorious but sudden and anticlimactic demise of the Goblin King. My verdict? This is simple fun, no more, no less, simple and fun. I enjoyed it, but I am not excited to play it again.

The most striking characteristic is that there is very little strategic depth. You can improve your chances slightly by treating this as a strict race to the finish and hoping that the other players will be sidetracked by exploring, collecting items, or battling minions. That runs contrary to the spirit of a dungeon-crawler, though. Indeed, declaring a winner at all, let alone based on the criteria determined in the rules, seems unnecessary.

The one compelling argument in favor of an individual winner is the lack of player elimination. Heroes can’t die, they just take a breather. There is no chance that the intrepid heroes will not make it to the end, even if there are setbacks along the way. This, too, is an interesting design choice. Is a hero’s death considered too confronting for the target age group? Was it a deliberate attempt to penalize risk-taking by slowing down a defeated hero? Or is there no particular reason for this decision?

In my opinion, the winning conditions for this game do not sit quite right. More successful games in the genre – and ones that also take much longer to play – include Dungeons & Dragons: The Legend of Drizzt (purely cooperative) Descent: Journeys in the Dark (semi-cooperative) Cutthroat Caverns (superficially cooperative, but almost completely competitive) and Talisman (purely competitive).

Child Geeks will enjoy this even if they are not die-hard LEGO junkies. The construction aspect, although simple, is a major part of the game’s overall experience. After running through the provided missions, Child Geeks can make their own maps and missions, perhaps combining Fortaan with other Heroica games. 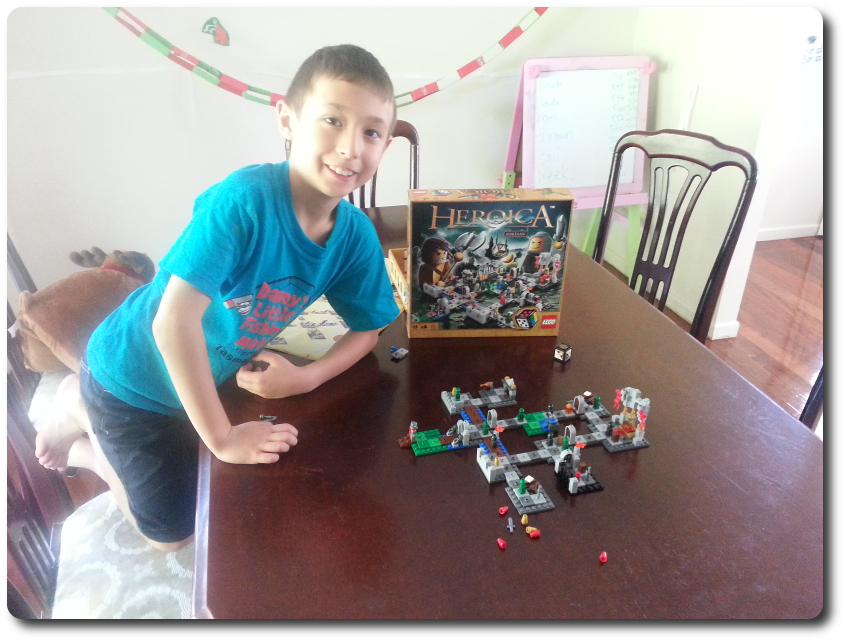 Parent Geeks will appreciate the relative peace and quiet that comes with assembling LEGO. You will have just enough time to make a cup of coffee (or tea, if that’s your thing) while your child sets up the game. Replayability from a parent’s perspective, though, seems limited, unless you and your child agree on introducing mission-specific house rules.

Gamer Geeks will recognize immediately that this is almost entirely luck-driven. As mentioned above, there are several weightier game alternatives with a similar theme, although on the whole this genre is not renowned for complex game play.