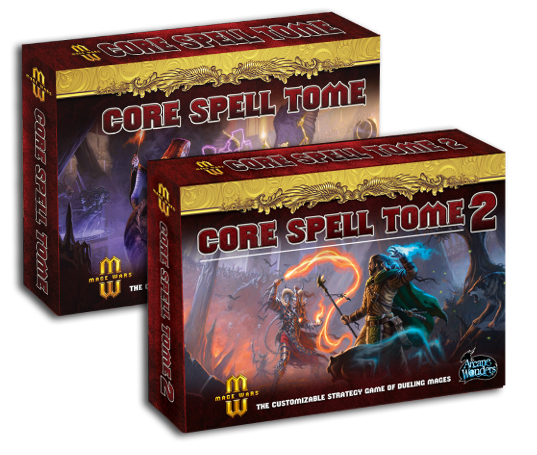 As the very air around you sizzles and snaps with spent magical energy, you cannot help but admire your opponent from afar. They have done well and have been more than a match for your cunning. For every spell you have used, they have countered. An observer would think you beaten, bested by your opponent’s spells. But you smile to yourself knowing you are far from conquered. Time to use your opponent’s spells against him!

Mage Wars Core Spell Tomes (both sets 1 and 2), by Arcane Wonders, are comprised of 110 Spell cards each. If both are purchased, it will bring the total number of Spell cards available to the players to a whopping 542! None of the cards that are included in the core spell tome expansion sets are new, however. If both core spell tome expansion sets are made available to the players, there will be an extra copy of every spell in the game. This is beneficial to those players who are looking to maximize their customized Spellbooks by including duplicates of useful spells that the core game’s initial Spell cards did not have. Note that the cards included in the core spell tomes can only be used with the core game, Mage Wars. If you are not familiar with Mage Wars, please take a moment to read our review.

The first core spell tome set focuses on the less powerful spells available to the player. Less powerful, but not less useful. With small demand on a Mage’s Mana pool, they tend to be the “go to” spells for quick fixes and adjustments while in the combat arena, making up the bulk of most Spellbooks. Blocks, dodges, and positioning spells that can shift the game’s focus from weak defensive to a strong offensive in seconds. Having more of these cards allows the individual player to add some much-needed extra “tricks” to their Spellbooks which could mean the difference between victory and certain defeat. 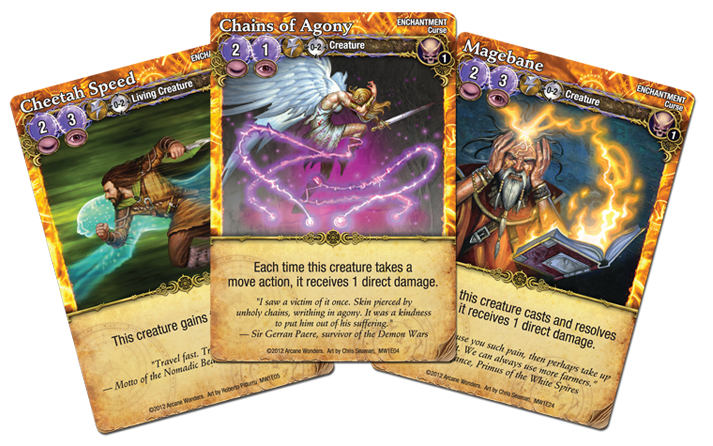 The second core spell tome set focuses on the more powerful spells and contains 70 Spell cards not found in the first core spell tome. The Spell cards in the second core spell tome are the “big guns” in the combat arena and take a good deal of the Mage’s focus and Mana. They also tend to be targeted and removed as soon as possible by the player’s opponent making them short-lived and expensive. With an extra Spell card that can be included in the player’s customized Spellbook, Mage’s now have another opportunity to cast their devastating spells, much to their opponent’s chagrin! 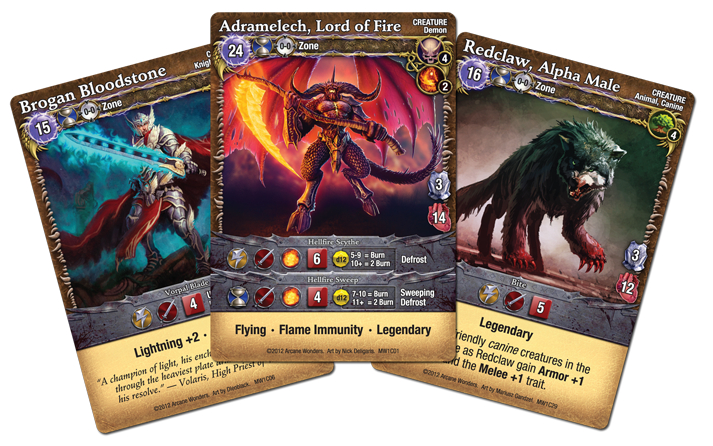 The rules for customized Spellbook building are the same and all the standard restrictions apply. Just because the players have more spells doesn’t mean they get to break the rules!

Nothing to predict here as the core spell tome sets are not technically adding anything new to the game. Well, more cards, but not any new cards. The game remains the same, but the player is now no longer limited by the core game’s initial 322 Spell cards. If anything, I predict much longer customized Spellbook building sessions. The core spell tomes give the players much more to think about and to play with.

The only question we need to ask ourselves is if the two Mage Wars Core Spell Tome sets are worth it, as they don’t bring anything new to the table. I personally think that they are, but only to those players who are looking to truly dive deep into the game’s customization. Each card provides the player a specific tactic, a new approach to their strategy, and as a result, increases the game’s depth. Before, when I played the game, I could “count Spell cards”. I knew that a Spell card, once played, could not be replayed and if I had it, my opponent didn’t. This gave me some insider knowledge about what my opponent was now lacking in way of a spell to respond to my attacks. With the additional cards, I now have no real idea what my opponent is bringing to the table. They might have spent a great deal of their points incorporating spells that only I had access to. What a wonderful and terrible surprise that would be to suddenly find yourself being attacked by a summoned creature you thought was under your control!

The core game has more than enough Spell cards for players to customize their Spellbooks and enjoy. I don’t want you walking away from this review thinking the core game is somewhat deficient. The only reason the Mage Wars Core Spell Tome sets exist is because the fans of the game demanded it. One of the most enjoyable aspects of this game is, ironically enough, not playing it. For us theory crafters, who spend countless hours building card decks for LCGs, CCGs, and agonizing over a few points in our World of Warcraft armor sets, having more cards means more opportunity to tweak, stretch, bend, and develop what we would consider an “unbeatable Spellbook”. That’s the theory, at any rate. More cards do not give a player an advantage over another. You still need to think through your moves, understand how the cards work, and use critical thinking when rolling your own Spellbook. In other words, having more ammo does not make you a better shot. The game’s balance is preserved while offering the players more opportunity to find new ways to obtain victory through additional customization.

It has been said that if “a little is good, more is better.” This is true for the Mage Wars Core Spell Tome sets and will most certainly provide new opportunities and methods of dominating rival Mages while not requiring players to learn anything new in the process. But they are by no means necessary to enjoy the game. The core spell tome expansion sets are icing on an already very tasty cake.