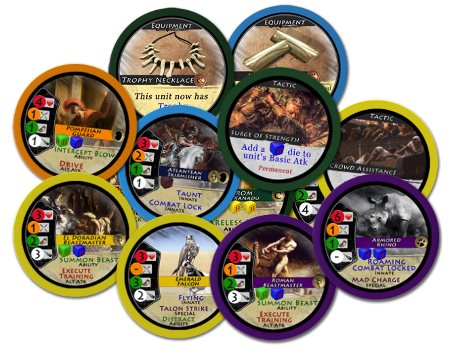 The crowds were becoming wrestles. No longer were they satisfied with the Gladiators who fought and died bravely, spilling their blood upon the sand. The crowds wanted more and the owners of the arena obliged. From the far reaches of the Empire, new warriors have arrived, bringing with them exotic weapons of death, fantastic animal combatants, and new heroes to cheer for. Once again, the crowd was content.

Hoplomachus Series, designed by Adam Carlson, Josh J. Carlson, and published by Chip Theory Games, is comprised of new Unit and Tactic chips. Each add-on is built around a central theme. The quality of the chips are excellent, with easy to read numbers and text.

Each of the Hoplomachus Series add-ons is summarized here. For the most part, their use within the base game is identical to the other Unit and Tactic chips with very few exceptions. Any player familiar with the base game’s rules will have little difficulty incorporating the new chips into game play.

Blades Edge contains 5 new Equipment and 5 new Champions suitable for solo, cooperative, and competitive game play. Pompeii, Xanado, Atlantis, El Dorado, and Rome all receive new heroes to cheer for and equipment to use. No new rules are introduced for the Blade’s Edge Champions. The Equipment chips do require a brief explanation, however.

A few of the more menacing Equipment chips include: 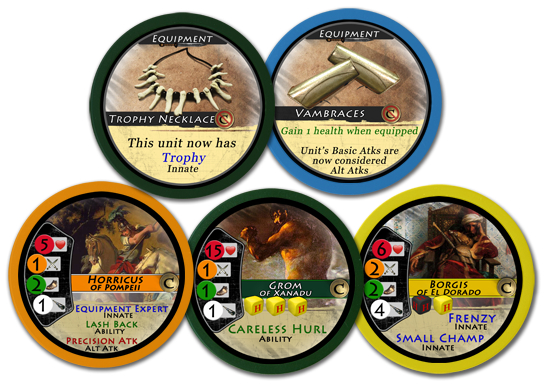 Beast and Master fuses together the strategic might of a seasoned warrior with the cunning of wild animals. Each of the 5 cities is given a Beastmaster and their Beast. This add-on is focused on competitive game play. When using them in the game, both Beastmaster and Beast are added to the draw bag. While the Beastmasters are interesting, of more importance are their Beasts.

A Beastmaster’s Beast is essentially a living weapon that only listens to the Beastmaster’s voice. Of course, that also means that the Beast is only useful if the Beastmaster remains alive. As the game progresses, a player will need to make sure both Beastmaster and Beast are in good health if they want to use them as a team. While the add-on doesn’t make the game more difficult, it does give the players more to consider. When combined, the Beastmaster and their Beast give the player more Abilities, Alternative Attacks, Innates, and Specials. Each Beast is unique and brings something special to the arena. A few of the more interesting abilities of note are summarized here.

To learn more about Beast and Master, visit the game’s web page.

Legends of the Sand

Legends of the Sand adds 2 new Gladiator Units and 1 Tactics chip for each of the five cities. These chips are added to the draw bag when players select their city during game set up. The new chips fit seamlessly with the base game’s components and are suitable for solo, cooperative, and competitive game play. The Gladiator Units and Tactics chips are hybrids of existing chips already present in the game. This provides the player with new Units and a Tactics that take the best aspects of other chips and fuses them together into one offering. No overpowered Gladiators or ridiculous Tactics here, however. Nothing is made out of balance with the new chips being present. What is made available are new ways to strategize your way to victory and a new tactic  to deploy to wow the crowd. A few of the more interesting Tactics and Abilities are summarized here.

To learn more about Legends of the Sand, visit the game’s web page.

Individually and together, the add-ons for Hoplomachus: The Lost Cities are the proverbial icing on the cake. They will do very little to persuade an individual to enjoy the game if they already do not and anyone who does enjoy the game will welcome the new Units and Tactics like an old friend. They are easy to use, fit seamlessly into the game, and give the players something new to think about. Once you add them, I doubt you’ll want to remove them.

The term “add-on” is “spot on” when it comes to the Hoplomachus Series. Each of the add-ons throws in more of what the base game already has provided, but comes at it in a slightly different way. The best example is Beast and Master, combining two warriors together that must work separately and in unison. This feels new at first, but a player will quickly realize that both Beast and Beastmaster are using the same rules built on the very solid foundation of the base game.

All of our groups enjoyed the add-ons and approved them. However, they also collectively agreed that they only provided value to the base game when they were all included. According to one Gamer Geek, “Each one of these is pretty good, but together they are awesome.” I concur. None of the add-ons will increase a game’s length significantly and introducing any of them into a game is very easy. In fact, I didn’t tell some of the players that I added the chips to see if they noticed. They didn’t until the Beasts and their Masters entered the arena. Otherwise, each new chip feel right into the game and was played with without issue.

I would recommend these add-ons to anyone who already has the game, especially Beast and Master. I wouldn’t suggest these to someone who doesn’t or just purchased the game. There is a lot to learn and to explore in Hoplomachus: The Lost Cities that will keep players occupied for many game playing sessions. I don’t belive the add-ons should be introduced until players feel like they have fully explored the base game’s depth. That way, when the new add-ons are introduced, they will provide the players an opportunity to re-explore, re-evaluate, and re-purpose all of their strategies and tactics. Which is a lot of fun.

If you are a fan of Hoplomachus: The Lost Cities, these add-ons will be a welcomed addition to your arena. Expect to be taken by surprise by some of the new chips and how quickly your plans for victory can be trampled. Especially if that new chip is a bloody huge charging rhino.