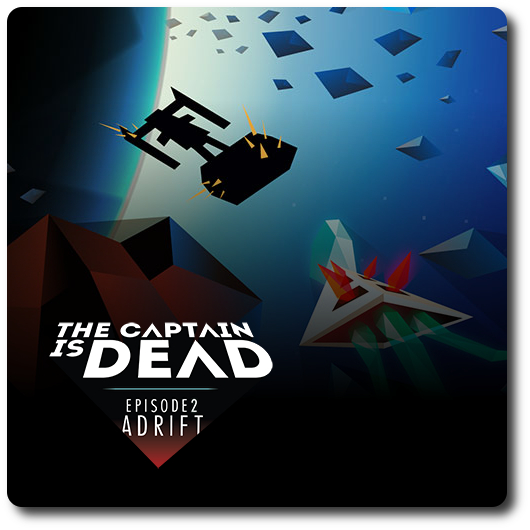 The Captain Is Dead: Episode 2 – Adrift is the next chapter in the player’s epic journey to survive their trip home. The remaining crew was able to get the Jump Core “Online” (the thing that makes the spaceship go zoom) and put some distance between them and the hostile alien attack spaceships. Their troubles, however, are far from over. There are still a few alien troopers in the corridors and at least one alien attack spaceship was able to follow the jump trail. In a desperate move to buy time and protection, the crew have maneuvered the spaceship into an asteroid field. This will stop the larger and more deadly alien spaceship from perusing, but now the crew has to contend with asteroids and the remnants of the alien boarding party. Oh, and the Jump Core is down. Again.

The Captain Is Dead: Episode 2 – Adrift, designed by Jamie Vrbsky, JT Smith, and published through the Game Crafter, is comprised of 24 Yellow Alert cards, 25 Orange Alert cards, 8 Red Alert cards, 2 Battle Plan cards, 12 Veteran Ability cards, 1 Reference card, and 10 Damage tokens. The cards are as thick and as durable as your standard playing card and match the base game’s components perfectly.

Third, before dealing out the Role cards, shuffle and deal 1 Veteran Ability card to each player. Then hand each player their Role cards.

Fourth, place 1 Alien pawn in every room and hallway on the spaceship, for a total of 12 Alien pawns.

Fifth, place the Damage tokens to one side of the game board.

That’s it for the new set up in addition to the base game set up steps. Players now resolve their first 5 Alert cards and attempt to survive.

Out of the Frying Pan…

There isn’t much in the way of new bits, but each new card is pretty important and summarized here.

The base game’s Alert cards focused on removing systems and steadily crippling the spaceship.  The Captain Is Dead: Episode 2 – Adrift Alert cards take a different approach. Instead of targeting systems, the spaceship is being pummeled by asteroids that reduce the spaceship’s shields quickly. Anomalies play a bigger role, causing negative persistent effects that will hinder the player’s progress. The end result is that the Alert deck makes the players run around more. Working as a team has always been important, but even more so with this game expansion. Several things at once will be going wrong and there is little time to ponder what should be done during the crisis.

But all is not lost. While the Alert cards are certainly more punishing, players have a much better way of tackling them directly. If the players have their “Torpedo Tube” system online, they can destroy the asteroids before they impact the spaceship, thus nullifying the Alert card. Alien Probes can also be shot down, which the players will want to do if they hope to survive. If the Alert cards are visible (meaning the “External Sensors” system is online), players can fire a Torpedo and blow it up before it becomes a serious threat.

Long story short, keep those systems in working order, kids. Failure to do so will make for a more difficult game.

If a Torpedo is not available, players can attempt to dodge asteroids as they come close to the spaceship. The spaceships ability to avoid the asteroid is dependent on the current state of the Jump Core. The Yellow Status bar on the Jump Core track determines how many “Command” Skills need to be used to successfully dodge the asteroid. 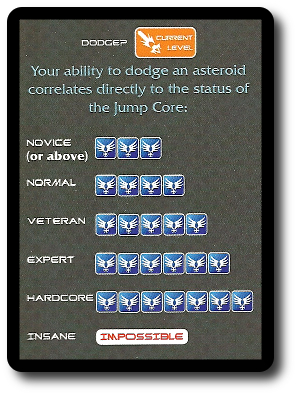 The new Battle Plan cards allow the players to create more Torpedoes (WOOT!) and to remotely repair any system on the ship. Two very important abilities that should not be held indefinitely if the crew is to survive. 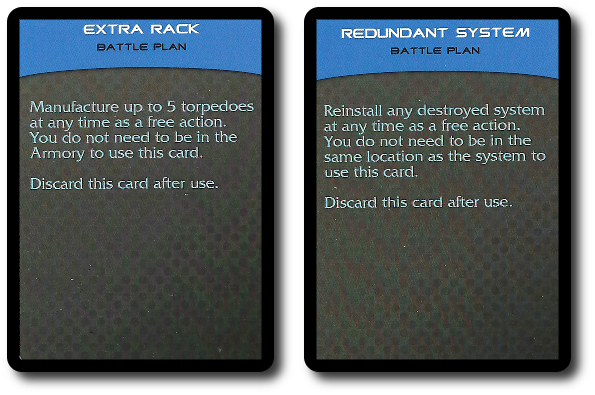 The game expansion furthers the game’s thematic narrative by making the correct assumption that the surviving crew members must be grizzled old veterans who have been tested and forged via adversity and horrible luck. The Veteran Ability cards give each player an additional action option so consider or a bonus to use. These cards are in addition to the player’s Role card, allowing further customization (or randomization) of each player’s character. 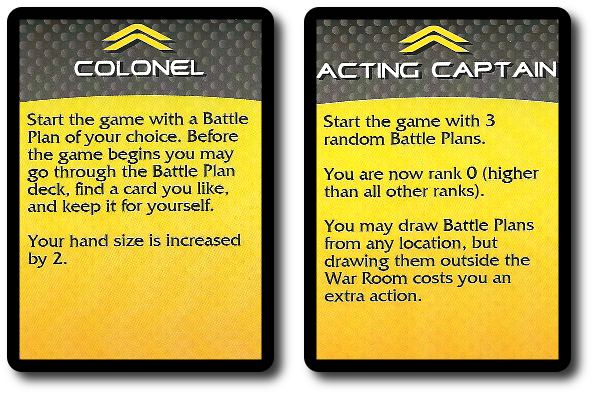 Veteran Ability cards are meant to be handed out before the player Role cards. This allows each player to consider what their veteran ability is, how it can be used to help the crew survive, and what role would best match with it. Failure to do so will not disrupt the game, but it may very well make it more difficult.

The Damage tokens represent light damage to spaceship systems. They do not indicate a significant amount of damage to suggest that something is destroyed beyond repair. An “Online” system can continue to function until it has 3 or more Damage tokens. At which time, it’s flipped to “Offline”. If a system cannot go “Offline”, it can receive a Damage token, but will always be “Online” during the game regardless of how much damage it takes.

Aliens are still going to be a problem for the players. The Aliens have shifted their mission from “control and conquer” to “saboteur and maim”. If the Aliens can slow the ship down, then their Alien spaceships can catch up and reinforce them. In game terms, this means that at the start of every player turn, more damage is done to the ship. If an Alien pawn is located in the same area as a Damage token, then another Damage token is added.

The Captain Is Dead: Episode 2 – Adrift gives players 2 possible ways to win. If players get the Jump Core working, the spaceship comes to life and escapes. Or the players can play and resolve every Alert card. In the base game, the Red Alert cards were specifically designed to quickly end the game. If players survived, they did not win (because they most likely cheated). Not the case here. The Alert deck represents the trip through the asteroid field. If the players can survive it, they leave the Alien spaceship on the other side and get away.

If players lose their ship or are overrun by Alien forces, they lose the game. Players can also lose if 2 “Alien Probe” Alert cards are in play at the same time.

To learn more about The Captain Is Dead: Episode 2 – Adrift, visit the game’s web page.

The new path to victory is a godsend in this game. The base game challenges the players to focus fully on the Jump Core, get it running, and getting out of Dodge when it’s “Online”. The new Alert cards and the new victory condition that allows players to win if they go through all the Alerts allows the players to limp along, focus on other systems on the ship, and take out the aliens. It might not seem like much, but this new focus gives players opportunities to explore new ways of play and to work together. It gives the game a very different feel and rejuvenates game play. It also allows individual players who cannot assist in the repair of the Jump Core a lot to do.

The Veteran Ability cards also add a new depth of play. They give each player a persona in which to view the game, as well as some direction on how best to go about playing it. The Role cards were good, but didn’t go beyond “function”. Which is to say, if a player was given a “Security Guard”, they pretty much knew what they were going to do for the game. The Veteran Ability cards change it up, giving each Role card and player an added ability to consider and use. Some of the combinations are very interesting, but nothing ever limits the player from doing what they want. All the cards do is make some actions a lot more easier than others. Game-wise, that’s great. Thematically, that’s awesome.

I found this expansion to be easier to win than the base game, most likely due to the players being able to control threat on a much more granular scale. Ducking and dodging asteroids gives players the ability to miss a lot of trouble. If there are enough players in the game, it’s always a good idea to task at least 1 player to man the helm so they can avoid those asteroids as much as possible or task one player to man the Torpedoes.

All of our players approved the game expansion, but found it to be more than just cards. According to one Child Geek, “This expansion really makes me feel like we are playing the next chapter in the game.” A Parent Geek said, “A great way to expand the game. It takes the game’s story and continues it with a new adventure and new challenges.” Finally, a Gamer Geek said, “This game expansion does everything right. It builds off the core of the game, changes the rules, and gives players a fresh take on the game play. I love it.”

For some, a game’s thematic story trumps rules, while others will tell you that a game’s rules are the single most important thing to game play. The Captain Is Dead: Episode 2 – Adrift has both, with solid rules that answer the “How” and thematic elements that address the “Why”. Players are never left wondering why they are doing something or how to go about. This game expansion furthers the player’s adventure, challenges them, and keeps things interesting, card after card. My only suggestion, other than playing this expansion, is to set the difficulty level 1 more towards “Insane” than you normally would. After playing a few games of The Captain Is Dead, veteran players will find the aliens and asteroids to be easier than expected. Either way, do sit down and play this expansion when time permits.