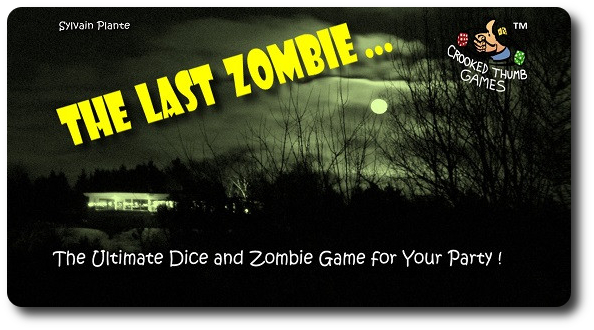 After the zombie invasion, humanity had a pickle of a problem. Zombies are really hard to destroy, making it necessary to keep them all on a remote island in order to keep everyone safe. From time to time, teenagers and thrill seekers would travel to the island, jump the fences, avoid the security guards, and drop into the zombie pits. Once there, they would play a game…

The Last Zombie, designed by Sylvain Plante and published by Crooked Thumb Games via the Game Crafter, is comprised of 5 custom six-sided dice and 30 Zombie pawns. The dice are solid and just a bit bigger than your standard sized die. The Zombie pawns are plastic and detailed enough to easily tell that they are walking corpses. 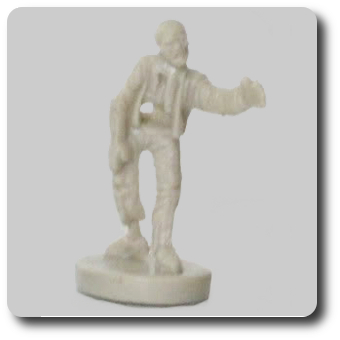 Third, determine who will go first and hand them the dice.

Playing with the Undead

The Last Zombie is played in turns with no set number of turns per game. A player’s turn is summarized here.

The maximum number of dice a player can roll is 5, but a player can never roll more dice than they have Zombie pawns in their Horde. At the start of the game, players will either roll 4 or 3 dice (depending on the number of players). As the game progresses, the number of dice they roll will shift. Dice should be rolled so all the players can see them.

If the player’s Horde contains zero Zombie pawns, they do not get a turn and pass the dice to the next player in the turn order sequence.

There are 4 different dice value. Each identifies 1 action the player must take. The player should resolve each of their dice one at a time, setting them aside once used, until all of the actions are taken. The actions can be taken in any order the player wants. It’s possible that not all the actions can be resolved due to lack of Zombie pawns in the player’s Horde or dice.

Once all the dice are resolved, it’s the next player’s turn.

Continuing and Ending the Game

The game continues as described above, with players taking turns rolling the dice and moving Zombie pawns. If a player loses all their Zombie pawns, they are not out of the game. As soon as a Zombie pawn is passed to them, they can take a turn.

The game ends when the last Zombie pawn still in play is sent to the Graveyard. This player has survived the longest with zombies and wins the game.

Killing Zombies for Fun and Profit

This game variant suggests that players put money in the Graveyard. When a Zombie is taken from the Graveyard, so is some of the money. Money is not returned to the Graveyard once it’s retrieved. I suggest 8 Quarters per player. In a 10 player game, you could win enough pocket change to buy yourself a bag of chips from the nearest vending machine. The winner of the game takes any money remaining in the Graveyard.

This game variant suggests (for adults only) that a player take a “shot” every time a Zombie pawn is brought back from the Graveyard. Half of each die is a Zombie Resistance symbol, improving the odds of a Zombie crawling up from the ground and passing you a drink, but only if you have 3 or more Zombie pawns in your Horde.

This House Rule was put in place by the Parent Geeks after they played the Child Geeks’ House Rule. When a player rolls 5 Gunshot symbols, all the Zombie pawns in the Graveyard are removed from the game.

To learn more about The Last Zombie, visit the game’s web page.

The Child Geeks enjoyed this game, but became bored with it after about 15 or so minutes. The game can end, but has this nasty habit of getting really close and then giving players an “opportunity” to keep playing. According to one Child Geek, “I like how easy it is to play this game, but it starts to get old.” Another Child Geek said, “This is the easiest Zombie game I have ever played. We can pretty much play this anywhere!” Which is something the Child Geeks really liked. Most Zombie games take a while to set up and can be fairly intense. The Last Zombie is easy to play and is only slightly more stressful than blinking. The only time Child Geeks really became irritated with the game was when a player only had 3 or fewer Zombie pawns left and looked to be a sure winner. The dice had other plans, however, and victory was lost due to Zombies shifting to the left or right. Overall the Child Geeks enjoyed themselves, but didn’t think that The Last Zombie was a “great game”. They found it entertaining – to a point – and to be a fun distraction. All the Child Geeks approved The Last Zombie. 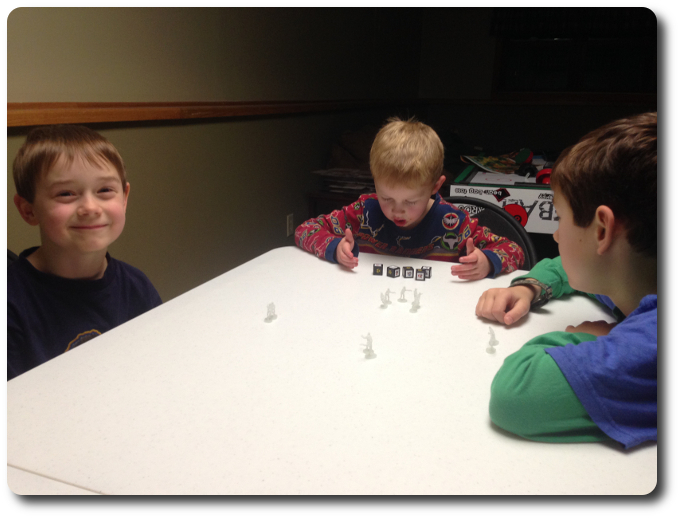 The Parent Geeks did not care for this game at all. According to one Parent Geek, “Good Lord, this is LCR! With Zombies! I hate it already.” Another Parent Geek said, “The fact that the game suggests you drink when you play is telling. It suggests that I need to be liquored up so I don’t realize how pointless the game is.” The non-gamers didn’t think the game was all that bad at first until it became obvious that the game wasn’t going to end anytime soon. According to one of the non-gamer Parent Geeks, “All I’m doing is rolling dice, doing what the dice tell me, and then passing the dice. I’m not even sure I’m a necessary component in the game.” Long story short, the Parent Geeks rejected The Last Zombie and could only tolerate it when playing with their Child Geeks.

The Gamer Geeks were very unkind to this game. While I encourage each player to tell me exactly what they think and record it down word for word, I do not always publish their quotes. This is especially true when they become slanderous and start to attack the game designer. Which, honestly, is not necessary. I will say this. The Gamer Geeks immediately recognized that The Last Zombie was a zombie themed LCR clone and hated the game for it. LCR is not a game Gamer Geeks enjoy and there are very few who even want to speak of it. The only Gamer Geek I can quote said, “This is a horrible game, but only if you think it’s a game. If you just look at it as a distraction, then it’s perfectly fine.”

The Last Zombie is a themed version of the dice game LCR. That’s not a bad thing, but it isn’t a great thing, either To put it in perspective, Candy Land has a higher rating and is more respected by Gamer Geeks than LCR. Which is not to say that LCR is a bad game. It’s just not a very interesting one. Players have no say and simply roll the dice. The only reason the players are even in the game is because the dice won’t roll themselves. This results in a very random and shallow game playing experience. Thus the passionate dislike for LCR, and by association, The Last Zombie.

But let’s pause a moment. LCR isn’t trying to be a deep game. It’s meant to be played when no one wants to pay attention to the game. LCR is the thing you do passively while you actively talk and engage others. The game is just there, in the background, happy to be part of the group. If you ask more of LCR or of The Last Zombie than mindless game play, you are being unreasonable. This is a game designed to occupy your table, not your mind. And when we consider that zombies are mindless monsters, the lack of mental power necessary to play The Last Zombie is rather àpropos.

If you enjoy LCR and are looking for a themed version to bring to your next social gathering, do take a look at The Last Zombie. All others need not take interest.