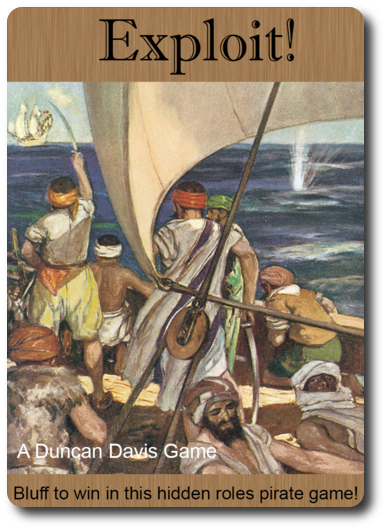 There has been no wind for almost 3 weeks and the pirate crew is becoming more wrestles and unruly by the day. Fights are breaking out and friends are turning into enemies. Supplies are low and there is talk of mutiny. If you want to survive this voyage you’ll need to make certain you remove anyone who might get in your way before they remove you.

Exploit!, designed by Duncan Davis and published by Sherwood Games, is comprised of 9 Identity cards, 6 Role cards, and 3 Rules cards. The cards are as durable and as thick as your standard playing card. The artwork depicts various classic illustrations and paintings of pirates.

To play the game, first shuffle and deal each player 1 Identity card, face-down. Players should always keep their current Identity card hidden from their opponents at all times.

Second, place the remaining Identity cards face-down in the middle of the playing area. This is the Identity draw deck. Leave room next to the draw deck for a discard pile.

Exploit! is all about uncovering secrets while maintaining you own. The game is played in turns with each player taking 1 action on their turn. A player’s turn is summarized here. Table talk is encouraged and can lead to players take certain actions with or without knowing the full truth.

A player’s Identity card will list 1 red action and 1 blue action. These actions belong to the identity and can be used by the player if they like. Doing so puts the player’s Identity card in jeopardy, however, as we will soon learn. All players can use the black actions without fear or immediate reprisal from their opponents, but there is still plenty of risk. A player can also attempt to use the other red and blue roles that are not on their card, but this is risky.

Long story short, a player is welcome to attempt to get away with anything they like. It only becomes a problem if they get caught doing something that they don’t have access to or draw too much attention to themselves.

Example of some of the Identity cards in the game

After reviewing what they know the player selects an action, points to an opponent, and announces their intent.

Before the player can resolve the action, any opponent can call them a “liar”. Calling another player a “liar” means you don’t think they are using a red or blue role that is listed on their Identity card. Since every Identity card only has 1 red and 1 blue action, an opponent who uses 2 blue actions is obviously bluffing, but calling a bluff is not enough. At anytime during the game, another player can call someone a liar if a blue or red action is used. This is important because players can block actions during the game that could result in opponents losing. It’s therefore VERY important to keep track of who is doing what.

Each of the actions are described in more detail here.

The player discards their current Identity card and then draws a new one. Everyone now knows who that player’s Identity was and might have a clue about what their new Identity might be.

This action is a lot like Accuse, but will not result in the player’s death if they guess wrong. The player points to an opponent, announces who they think they are. At this point, things could go a couple of ways.

The opponent simply accepts the results of the Assassination action and discards their Identity card.

The player guessed wrong. The opponent shows them their Identity card. Neither player loses their identity card.

This action allows the player to look at an opponent’s Identity card. The target of the spying can use the Facade action to block it. Again, caution should be used, as a player could be called a liar for using a blue action that they may or may not have.

This is similar to the Invent action, but is much more sneaky.

This action allows the player to block an Assassination action. It will always work unless the player is bluffing and caught by their opponents.

This action allows the player to block a Spy action. Like the Assassination action, it will always work unless the player is bluffing and caught attempting to trick their opponents.

Perhaps one of the most understated and most powerful of all the actions, Scour allows the player to look through the discard pile or the draw deck. This gives the player a wealth of information regarding what Identity cards are still in play or have yet to enter the game. Then the player gets to shuffle whatever pile or deck they selected and sit back with a smug look on their face. Knowledge is power in Exploit!, after all. But knowledge will make a player a target of reprisal, making this action a doubled edged sword.

The game ends when there is only 1 player left. Through assassination, bluffing, and manipulation, they have survived. Truly, they are a pirate of the highest rank and caliber.

To learn more about Exploit!, visit the game’s web page.

The Child Geeks understood how to play the game and how the game could be won, but never reached a point where I felt they really “got the game”. I observed a lot of blatant guessing with little to no rhyme or reason. When I asked one Child Geeks why they guessed another player was the captain, he said, “He was acting bossy.” I about laughed myself into a coma, but the humor of it all could not hide the fact that the Child Geeks simply weren’t paying close enough attention. This is a Deduction game, which means players need to really focus in on what their opponents are and are not doing. A few of the oldest Child Geeks did this and were successful, but the majority of the Child Geeks were playing blindly because they never took the time to really observe. According to one Child Geek, “I like this game, but it’s really hard at first.” Yes, it is, and that’s why you have to play carefully until you start to get a better idea of who you are dealing with. Another Child Geek said, “I really like this game! It’s like a mystery you have to solve.” Also very true. It’s like playing a murder mystery game where the murderer is still walking around. This creates tension which was not lost on the Child Geeks. When all the games were over, the Child Geeks liked the game for the most part, but not enough to give it their full approval. 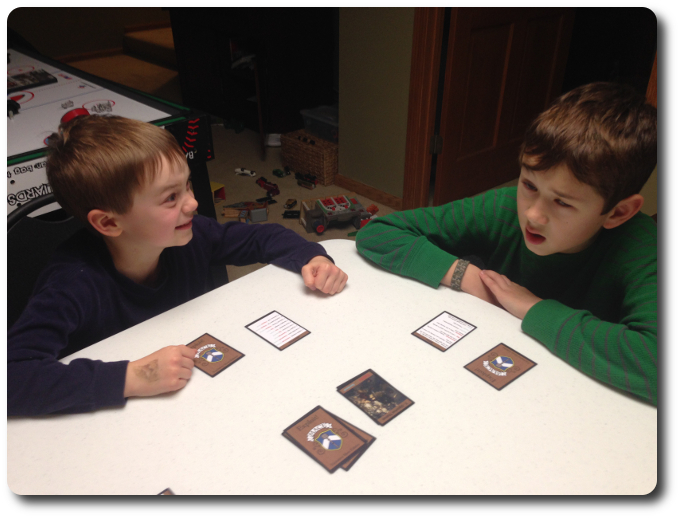 One brother attempts to bait the other as both attempt to assassinate each other. Such brotherly love….

The Parent Geeks were very pleased with this game, finding it to be an entertaining experience over coffee and cookies. One Parent Geek said, “This is a very quiet game, where I feel you have to observe everything to get a clear picture. It was a very different game playing experience and I enjoyed it very much.” Another Parent Geek said, “Not once did I really know who people were, but I always felt that enough information was being given to me to consider and respond to. This is a very elegant and wonderful game.” After the games, coffee, and various assassinations, the Parent Geeks voted to approve Exploit!

The Gamer Geeks understood how to play the game and immediately broke it. They all attempted to assassinate each other and that quickly brought a group of 6 Gamer Geeks to 3. From there, they played a bit more carefully, but were still reckless. After the first game was over, they played it again and this time gave the game their full attention. Lots of table talk and some very interesting metagame playing, as the Gamer Geeks attempted to figure out who was who. According to one Gamer Geek, “I’ve played games like this before and they are always interesting, but they also only work if you have the right group. That’s why I don’t get to play games like this too often.” Another Gamer Geek said, “I want there to be more back and forth in this game, like there is in Werewolf. I want to figure out who people are by using more than just their actions.” This came up a number of times and the Gamer Geeks discussed it in great detail. The majority of Gamer Geeks felt that the game did a good job of facilitating the fun, but there needed to be more back and forth with the players. In the end, the Gamer Geeks couldn’t agree that the game was a good one or a bad one and opted to simply say it was “OK”.

For the most part, I was pretty pleased with Exploit! The rules are a bit difficult to digest and you have to play the game at least once to understand how everything works. Overall, the game provides an excellent challenge, but to some of the players’ points, the success of this game is heavily dependent on the players at the table. If you don’t have individuals who are willing to sit, listen, observe, and attempt to trick the hell out of you, the game falls flat.

I think this is a great game for older Child Geeks and families. Gamer Geeks might find it a bit slow or a bit shallow at times since it’s pretty easy to knock a player out of the game or yourself. The best mix is a group of casual players who all know each other well enough to know when an opponent might or might not be liar. If you have such a group of friends, do take a look at Exploit! and set sail on the high seas of mistrust.