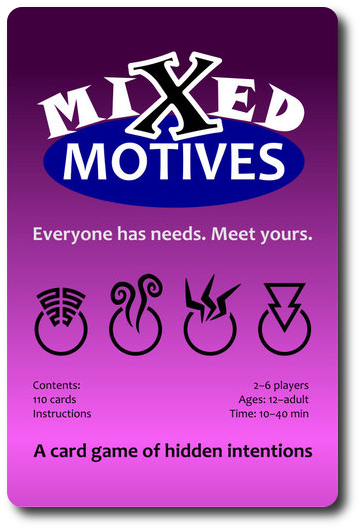 President Dwight D. Eisenhower said, “Motivation is the art of getting people to do what you want them to do because they want to do it.” This is exactly what Mixed Motives is about. You and your opponents are all attempting to complete different hidden motivations. There is no set path to victory and you might have to get others to unwittingly help you win the game. It’s all about subtle manipulation, bluffing, and misdirection. Be careful who you trust and don’t let anyone know your true motives!

Mixed Motives, designed by David Winter and published by Agreedibus Games via the Game Crafter, is comprised of 12 Motivation cards, 12 Need cards, 45 Fulfillment cards, and 41 Action cards. The cards are fairly minimalistic in design, giving much of its space to the brief text descriptions. Icons are used to represent the different Need types (of which there are 6), but there is little else in the way of illustrations. The overall presentation of the cards is very clean, providing a pleasing presentation throughout.

To set up the game, first separate the cards into three different card types. Each type has a different color on the card’s back making this a fairly quick exercise. The Need cards have a red back, the Motivation cards have a green back, and the Fulfillment and Action cards both have a blue back.

Second, go through the Need cards and pull out one set of Need types per player. For example, if you were playing with 3 players, you would remove 3 sets of Need types (for a total of 6 cards). Any Need types not selected are removed for the duration of the game. 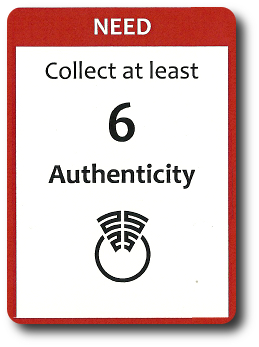 Third, shuffle the selected Need cards and deal 2 out to each player, face-up. It doesn’t matter if a player has the same Need card types.

This completes game set up. Determine who will be the first player and begin. 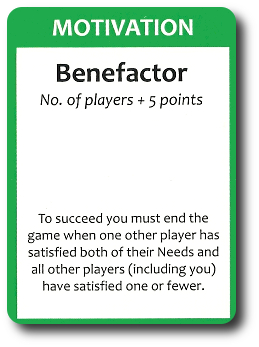 Mixed Motives is played in turns with no set number of turns per game. A player’s turn consists of up to 3 possible actions. The number of actions the player can take is equal to the number of completed Fulfillment cards the player has plus 1. This means the player will always be able to take at least 1 action during the game, earning 1 additional action each time they complete a Fulfillment card they own. 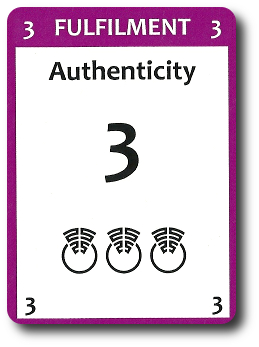 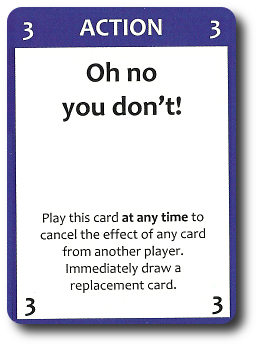 Alternatively, a player can place an Action card on any Need card to represent 1 Fulfillment of that specific Need type. In other words, they can be used just like the “Wild” Fulfillment cards.

The player removes 1 card from their hand or any 1 card attached to their Need cards. Removed cards are discarded. Why remove attached cards to your Need cards? Depending on the player’s Motivation card, they might lose the game if they have 1 or more Fulfillment cards on their Need cards!

Regardless of the number of actions the player takes, they always draw back up to a 6 card hand. If the player draws a “Play Immediately” Action card, they must play it and then draw another card.

If playing with 4 or less players, you can deal out an additional Need card. A player still only needs to complete 2 Need cards (or none at all) to trigger any Motivation card end game requirements.

To learn more about Mixed Motives, visit the game’s web page on the Game Crafter.

I do so enjoy a good Deduction game! Figuring out what each player is doing and why is always a great exercise in observation and critical thinking. But Mixed Motives is so much more than watching for subtle hints. It’s also a Cooperative game (more of a semi-cooperative, really) and bluffing is required right from the start…or not so much, depending on your motive. The abstract nature of the game is also very intriguing and could lead to some very interesting decision making conundrums.

As such, I doubt we’ll see the Child Geeks fall in love with Mixed Motives. There is a lot going on under the covers that will be completely missed by the less experienced and younger players. For the Parent Geeks and the Gamer Geeks, I would be very surprised if I don’t receive very positive feedback. Mixed Motives is very casual, but keeps the players engaged. It’s this level of engagement and the intriguing meta game that will most certainly appeal to the Gamer Geeks.

Teaching Mixed Motives is best done by showing several Motivation card and explaining how players win the game differently. Emphasize that everyone is playing the same game, but not playing it towards the same end. This is a very important point to make and you shouldn’t be surprised if your players either respond with enthusiastic smiles or dumbfounded frowns. For less experienced players, different victory conditions is going to throw them into unexplored territory. Assure them that their Motivation card will make the path they must take to victory very clear. It might be one they don’t want to take, however. In which case, they are welcome to change it later in the game. Note that Mixed Motives requires its players to read. An older player cannot help a younger player, either. Doing so will ruin the hidden information and the fun.

And so, after teaching the game to my oldest little geek, I asked him his thoughts on the game so far.

Yes, it is. More to the point, the way you have to play the game is different every time, too. Let’s see if Mixed Motives is a surprisingly good time or a mixed bag of yuck.

As predicted, Mixed Motives was a mixed bag with the Child Geeks. The older and more experienced players enjoyed the game and found it to be fun and challenging. They especially liked the bluffing and sneaky plays they had to do to stay underneath their opponents’ radars. The younger Child Geeks were only fixed on their Motivation and were at a disadvantage right from the start. It was clear what they were trying to do and this is a game that requires bluffing to be played well. This led to frustration and an eagerness to end the game or simply walk away from it. According to one Child Geek who enjoyed Mixed Motives, “What I really like about this game is figuring out what the other players are doing and how I can get them to help me win the game!” Another Child Geek who didn’t enjoy the game said, “I didn’t know how to win because I didn’t know how to make the other players lose”. Both Child Geeks are correct. 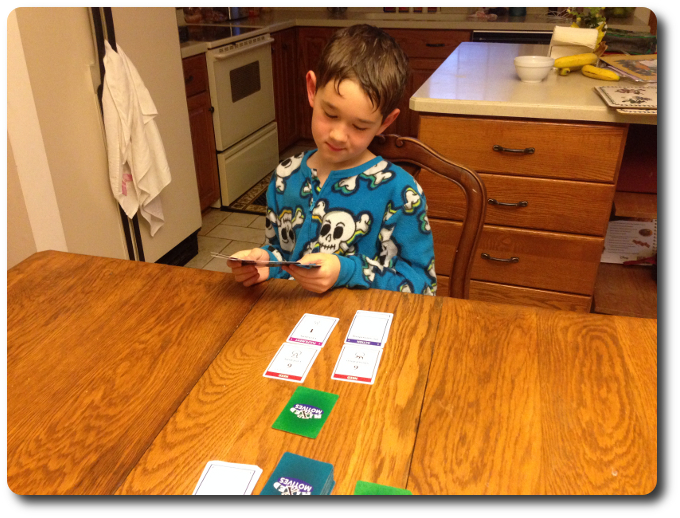 The Parent Geeks very much enjoyed Mixed Motives. The non-gamers and inexperienced players were a bit lost at first, especially when other players started to complete their Needs, but they quickly caught on that some altruistic deeds are anything but. According to one Parent Geek, “This game is very easy to learn how to play but really challenging to win. I like that, but I never felt like I was bored or over my head. Frustrated, sure, but always happy.” Another Parent Geek said, “The most difficult part about this game is simply finding out how to play faster, smarter, and quieter than your opponents.” When all the votes were collected, the Parent Geeks approved Mixed Motives.

The Gamer Geeks really liked the subtle meta game of deception, bluffing, backstabbing, and selfish acts disguised as selfless deeds. According to one Gamer Geek, “This is kind of like Poker, but with much more to think about.” Another Gamer Geek said, “This is a really neat game. You can’t approach it from just one direction. I thought I would try to complete my Motivation as fast as I could, but now I see I could be hurting myself by doing so. Very interesting things are going on at the gaming table.” All the Gamer Geeks voted to approve Mixed Motives, finding it to be a fun and challenging casual card game that was perfect for light game nights.

I really like Mixed Motives. I have yet to play a single game that felt like a repeat of the many before it. It all has to do with the Motivation card you were dealt and the motivation of others. It’s a very strange thing to know that one of the players at the table is working as hard as they can to help you out only to make sure you lose the game. I think some of the Motivation cards are more difficult to win than others, but the higher point values for the more difficult Motivation cards make up for it. Besides, a player can always change their Motivation if they feel it’s too difficult to obtain.

One of the more interesting aspects of the game is how much you learn about the other players at the table. You don’t need to know your opponents to beat them, but you do need to be able to read them. A player must be observant and work out what might be motivating their opponents. Did they play the card to just hurt others or was it a step on the path to victory? A player might find themselves locked in a redundant loop of self-doubt and critical over analysis, but that is also part of the fun. You simply cannot trust any other player. Even those that seem to be helping you might be doing so in order to win. When playing Mixed Motives, you quickly learn not to trust anyone any further than their last card play.

Do play a game or three of Mixed Motives when you get a chance. It’s a very interesting mix of deduction, bluffing, and  semi-cooperative to cooperative abstract game play. It’ll leave you guessing and wanting more.